Why is a seated posture for astronauts preferred over a standing posture?

Crewed spacecraft for travel to/from Earth, and much speculation for the SpaceX Starship, have seats with the astronauts upper body level in an eyeballs in orientation. This is because this is the orientation human tolerate acceleration best.

However it is also the case that the astronauts upper legs are vertical like a typical chair rotated 90 degrees, rather than horizontal like a bed. Is there any reason for this posture other than the small size of some spacecraft and varying acceleration direction of the Space Shuttle?

I have found a NASA report Seating Considerations for Spaceflight: The Human to Machine Interface but it doesn't go into leg orientation.

The primary reason for placing astronauts in a seated posture instead of a standing posture is that it is the best posture to tolerate higher accelerations (and for a greater period of time). The seated position places the legs forward of the rest of the body. When the spacecraft accelerates in the forward direction, this displaces blood out of the legs and into the brain. In contrast, a standing position leaves the legs at the same level as the head, preventing the displacement of blood to the brain.

The results can be seen in the following graph from The Physiological Basis for Spacecraft Environmental Limits, p. 81: 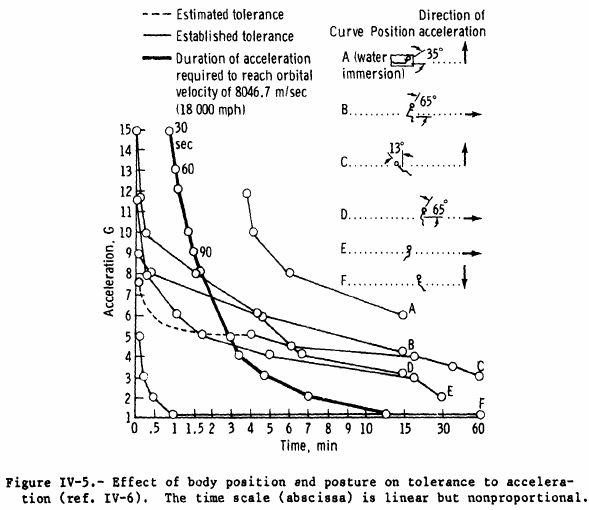 Some less-important advantages of the seated posture:

Not the answer you're looking for? Browse other questions tagged crewed-spaceflight spacex-starship or ask your own question.

17
Why did the Apollo capsule have seats if the astronauts never were sitting in it?

15
Why do ISS astronauts use lower quality microphones for official radio communication than for PR events?
3
What immunizations (vaccines) are required for astronauts?
3
Would high altitude native populations make better astronauts for a Mars mission?
27
SpaceX Starship landing on Moon or Mars: why doesn't it fall over?
5
Do astronauts on the ISS refer to themselves as standing?
1
Why are we still giving medical support to astronauts after they land? Or any support for that matter?
13
Why do they make the astronauts sit in Crew Demo-2 for so long before launch?
5
Why don't astronauts email their inventory?
31
Why do astronauts wear spacesuits during launch?
16
Exactly why does Starship need to be this big for interplanetary travel?