Why does the Indian PSLV rocket have tiny boosters?

I have noticed that the Indian rocket PSLV has tiny strap-on boosters attached to it on the sides at the bottom. Why would these be used instead of just using a larger first stage? Why is there an even smaller booster at the front?

Why would these be used instead of just using a larger first stage?

Strapping on differently-sized boosters allows variance in payload mass without redesign of the first stage. The PSLV has flown with no (PSLV-CA), small as shown (PSLV-G), or big (PSLV-XL) solid boosters. 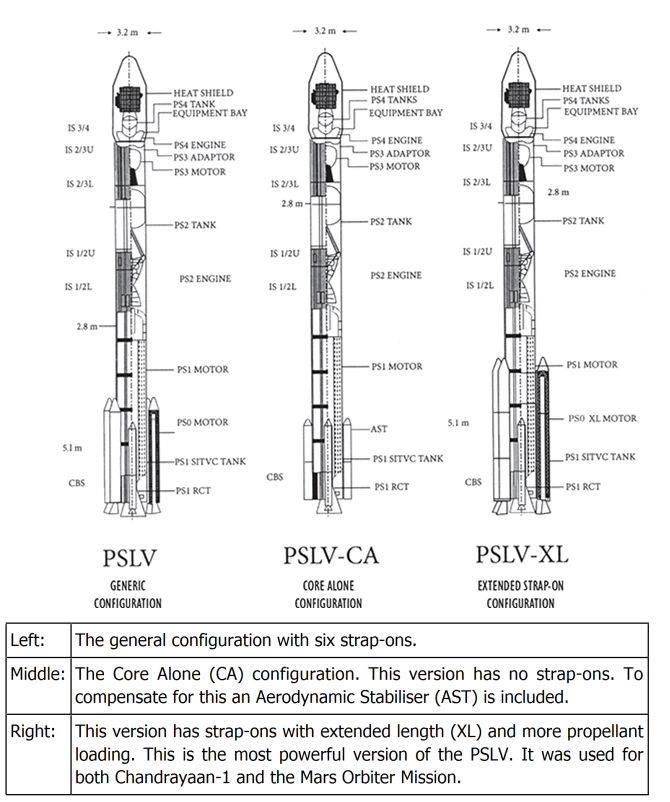 Why is there an even smaller booster at the front?

The "even smaller booster at the front" is not a booster. It is a tank which holds fluid used in the thrust vector control system sitting on top of a reaction control system (RCS) module.

It holds strontium percholorate. The system is called Secondary Injection Thrust Vector Control (SITVC). Read more about it here. This picture shows the juncture between the tank and the RCS module. 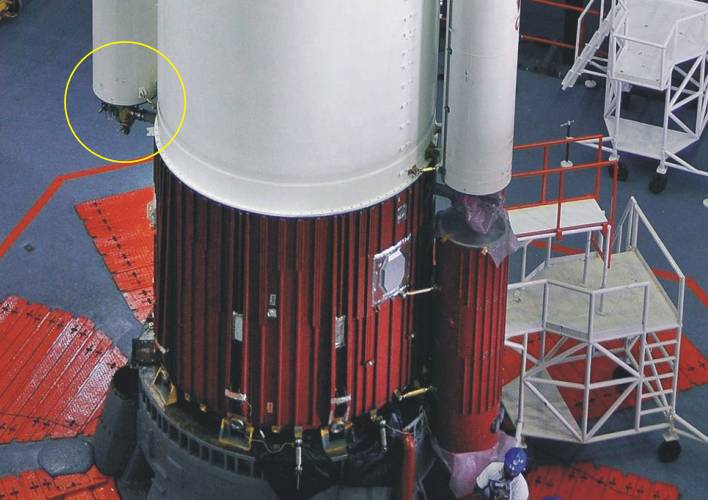 This is the SITVC system piping around the first stage engine nozzle. 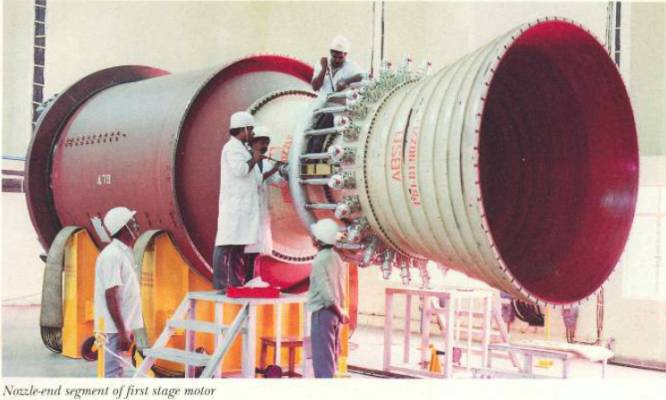 Some variants of the US Titan launcher used a similar TVC system even down to the side-mounted tanks, as discussed in this answer.

The answer already posted is excellent. All I want to add is a follow-up question you might want to ask, and my answer to it.

Q: OK, so those in particular aren't boosters. But would it ever make sense to use lots of tiny boosters instead of one big one?

A: Yes, for two main reasons.

One is the extreme expense of anything involved in space flight, and the huge risk involved in developing anything new. If you have a bunch of things you've used lots of in the past just lying around, it's faster, cheaper, and safer to strap together some of the proven old stuff than try to design a new engine and hope it doesn't explode on its inaugural flight. Similar logic applies to degree of failure. If you have one engine, and it doesn't start, you aren't going to space today; but if you have eight and one doesn't start, you can still be on your way.

Two is the way solid rocket motors work. With a liquid rocket, you can control the thrust during flight by changing the rate and mixture at which you burn propellant, and you can turn it off whenever you like (though some designs can't be turned back on), but that makes them much more complicated than a solid. A solid rocket, however, burns everything inside it and can't be changed or stopped. It can have a variety of thrust profiles --- that is, the shape of the curve of thrust versus time --- built into it in the factory, by choosing the shape of the surface that burns; but once the fuel is shaped, that's the only thrust profile it will ever have. When you look at your array of available boosters, you may discover that the big one will output its thrust at the wrong times, while the smaller ones better fit your plan of how hard to push when.

You also have to keep in mind that an orbit is not a fixed position; it is continuously accelerating and moving very fast (7 or 8 km per second in low orbits, or 'only' 3 km/s in geosynchronous ones), falling and falling forever in a very carefully chosen path which must be maintained without needing to refuel. Achieving the desired orbit requires not just getting to the right place, but getting there with the right velocity, in magnitude and direction, or your mission will fail. If you get to the right place, but are going too slow or too vertical, you may crash back down again; if you are going too fast, you may not come back around for another pass (escape velocity from earth is 11 km/s). This is a big part of why solids are often thought of as boosters, and why upper stages mostly have to be liquid. If you have only solid rockets, and you want to vary the mass of the thing you are launching, or want to vary the orbit it ends up in, then you have to fly a particular kind of inefficient trajectory that intentionally burns up just the right amount of extra fuel in self-cancelling maneuvers that don't make sense unless you understand that solids can't be stopped, so you have to dump excess delta-V somewhere. Lower stages are continuous high thrust with coarse control, just to get you off the ground and into space; upper stages are intermittent low thrust with fine control, to get you from wherever you ended up into the correct orbit you actually want. Rather than use too big an engine and risk overshooting, a group of smaller ones may be able to get you closer to the right answer with less fiddling around at the end.

Not the answer you're looking for? Browse other questions tagged thrust isro booster pslv or ask your own question.

35
Why is there a hole in solid rocket engines?
14
How does a single SRB control attitude?
19
What was the purpose of the small red tank attached to the Titan-Centaur launcher?
7
Why does PSLV use four stages to get to LEO, and why do they alternate solid, liquid, solid, liquid?
6
What benefit do the aerodynamic stabilization “pods” on the PSLV-CA provide?

8
Can Indian PSLV take ISRO to Mars?
8
Why do rockets separate from both its strap-on booster cores simultaneously instead of one at a time? (Delta IV Heavy, Falcon Heavy, Angara)
12
How many 1st stage boosters will SpaceX settle for, for its LEO/GTO fleet?
5
ISRO's PSLV-C37 with 104 satellites - after 56 hours only six TLEs, which factor is greatest challenge?
6
Why will SLS Block I bring less mass to LEO than the STS shuttle system did?
4
Why is ISRO Launch Escape System so SLOW?
3
Can a first stage be a booster?
4
When was the first strap-on booster used in spaceflight?
7
Why “strap-on” boosters, and how do other people say it?
1
What is the purpose of the pairs of cylinders on the interstage of PSLV?