How many time-zone does the ISS cross through during one orbit?

A recent non-answer to an unrelated question stated that the ISS crosses 16 time zones during New Year's Eve, which is obviously incorrect, the actual answer being "around 200".

But this inspired me to a follow-up: How many (minimum, maximum) time-zones does the ISS fly over during one full orbit? According to Wikipedia there are currently 38 time zones across the world, some large, some small. None of them is located entirely at high latitudes, so all can be visited by ISS at some point.

Let's define "one orbit" as the time between crossing one meridian and crossing the same meridian again. I guess that daylight savings time should be excluded for simplicity.

Here are some results of me playing with a map and ground tracks. I took a plot of ISS ground tracks and overlaid it onto the most detailed map of time zones from Wikipedia.

First and foremost, time zones are weird. Even if we take "regular" time zones only and don't look at any of the political decisions, Earth has 25 time zones from UTC+12 to UTC-12. On top of that, there are 13 further differing time zones with times like UTC+12¾ on the Chatham Islands.

None of these zones is placed further North or South than 51° latitude in its entirety, i.e. all 38 of them can be visited by ISS in one orbit or another.

To start off with a curiosity: You can cross the international data line at least 6 times (possibly 8 if we trust the drawing on the map to be precise) during a single orbit: 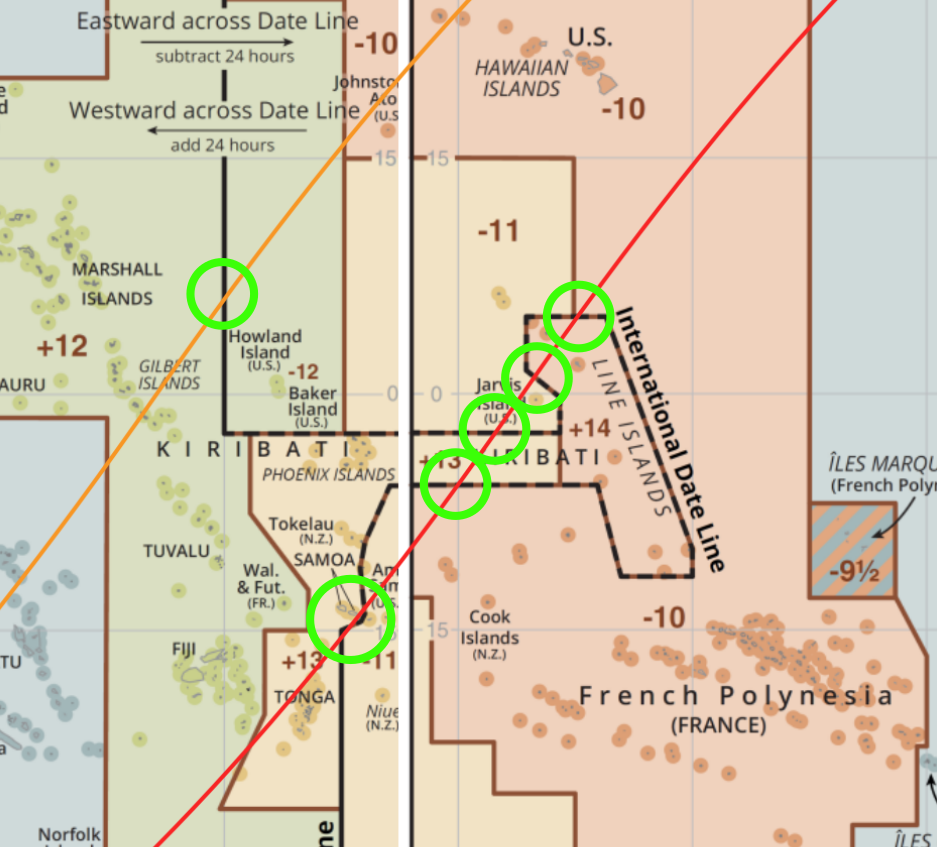 To get a minimum number of time zones to cross, we have to look for possibilities to "skip" the regular ones. E.g. we could skip

Others like UTC+2 can't be skipped by ISS because Ukraine extends further North than the 51° inclined orbit reaches.

For some other time zones the map looks like they could be skipped, but these happen to be over international waters where the default time zone based on 15° segments applies.

Actually it seems possible to skip two of them in the same orbit, totaling to 22 time zones crossed:

The maximum of zones can be visited by including as many of the special time zones as possible, e.g. UTC+5¾ of Nepal or UTC+14 of Kiribati. Judging the exact amount is difficult from the map, because zones around islands are shown larger than they actually are. Anyhow, I was able to find an unambiguous 32 time zone orbit that doesn't make use of islands:

No, you should not define "one orbit" that way. Any orbiting object completes one orbit in the time it takes to go once around the planet in inertial space, irrespective of how fast the meridians of longitude drawn on the planet or other body being orbited are rotating as it does so. Instead, base your notion of one orbit on how often the ISS or other satellite passes through the plane of the equator from south to north (the "ascending node" of the orbit). The higher the altitude of the orbit, the fewer orbits are made during one day.

The ISS orbits at an altitude of about 420 km, so it takes about 93 minutes to make one revolution, during which time the earth has turned about 23 degrees in longitude. Since the ISS, like most other satellites, is going around in the same direction the earth is ("prograde" rotation), it flies through 383 degrees of latitude in each orbit.

This is exactly where it would make sense to discuss an idealized, apolitical, mathematical time zone. There are 360 degrees in a circle and 24 hours in a day, so an idealized timezone is a wedge-shaped section of the planet between two meridians 15 degrees apart. The ISS passes through 25.53 such idealized timezones in each 93-minute orbit.

GPS satellites orbit much higher, so they only go around twice per day, passing through 36 such timezones in each 11 hour, 58 minute orbit. Note that is not 12 hours, because they are orbiting once every sidereal day, not every solar day.

Not the answer you're looking for? Browse other questions tagged iss orbit trivia or ask your own question.

27
What time zone is used on ISS to define a day?
19
Does the orbit of the ISS decay?
12
How many airlocks does the ISS have?
4
Lowest amount of people on the ISS at one time
9
How are the orientations of the ISS' eight independent solar arrays optimized?
3
How many "main" batteries does the ISS have? How many are still nickel-hydrogen?
3
Leaving the ISS orbit