What ever happened to 6Q0B44E - potentially the "artificial satellite (with) the farthest orbit around the Earth"?

It looks as though it's going to be a wonderful read!

On page 452 of Chapter 22 Space Hardware: Mystery Solving I see mention of the object 6Q0B44E. That Wikipedia article has a 7 MB GIF which suggest a chaotic three-body orbit in cis-lunar space. The last frame of that GIF (made from Horizons output with the Moon's orbit included) is shown below.

JPL's Horizons will show a simulated trajectory between 2004-Jan-1 and 2009-Jan-1 and the output says:

Question: What happened? Why are there no observations shown in the Horizons database after it's seven month observation arc ended? Did it escape? Did people loose interest in looking for it or tracking it? It seems like the three-body chaotic orbit would have been quite a fun "science project" to track and to compare to calculations!

It could also be a new answer to What artificial satellite has the farthest orbit around the Earth?

related: Have there been any documented mini-moons since 2006 RH120? 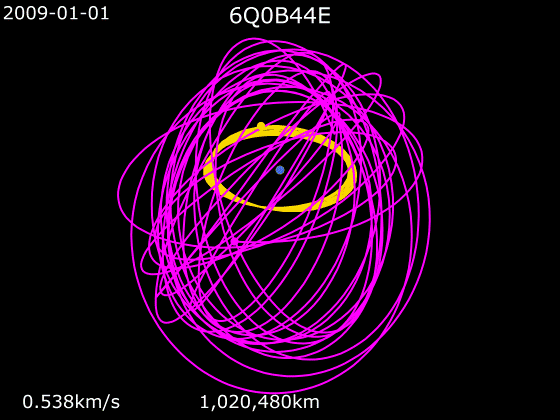 A similar case is currently being provided by XL8D89E, the only currently known object in geocentric orbit with a period of more than a month. This body has been seen multiple times since 2015, but it is identical to 6Q0B44E, an object in a very similar orbit seen more than a decade ago, in 2006-2007. Again, the motion of the object is not modelled well by gravity alone, nor by the addition of a simple radiation pressure force. A more complex model may be capable of fully fitting the available observations of XL8D89E, and ideally link its observed arc with the one for the much older 6Q0B44E, thus ensuring the predictability of the object’s motion for the foreseeable future.

Some additional details are available from Project Pluto "Pseudo-MPEC" for XL8D89E. (Thanks to blobbymcblobby for the reference.)

The wikipedia article 6Q0B44E says it. "6Q0B44E, sometimes abbreviated to B44E, is a small object, probably an item of space debris, that is currently orbiting Earth outside the orbit of the Moon as of November 2018."

19
What artificial satellite has the farthest orbit around the Earth?
9
Have there been any documented mini-moons since 2006 RH120?