A collection of photos in posts by Miles Lumbard there is a page titled Mercury Retro Pack Walk Around Page 1 (spotted here in reference to the thermal zebra stripes) can be found nine images with the caption:

Any questions, comments, or problems, please email me.

These pictures were taken and shared with the web by Miles Lumbard .

Photographed at the Smithsonian's National Air and Space Museum in Washington, D.C.

Below are small cropped sections from photos 1 and 3 showing the heat shield, which looks like some kind of translucent organic resin or perhaps phenolic material.

My understanding is that this is some kind of ablative material; when exposed to high temperature during reentry the surface is constantly "gassifying" producing a layer of gas of organic molecules which are opaque to the thermal infrared light radiated by the hot gas and plasma in the reentry shockwave. The gas absorbs the radiated heat and quickly moves off and is replaced by a fresh supply as the shield continues to generate more to replace it. 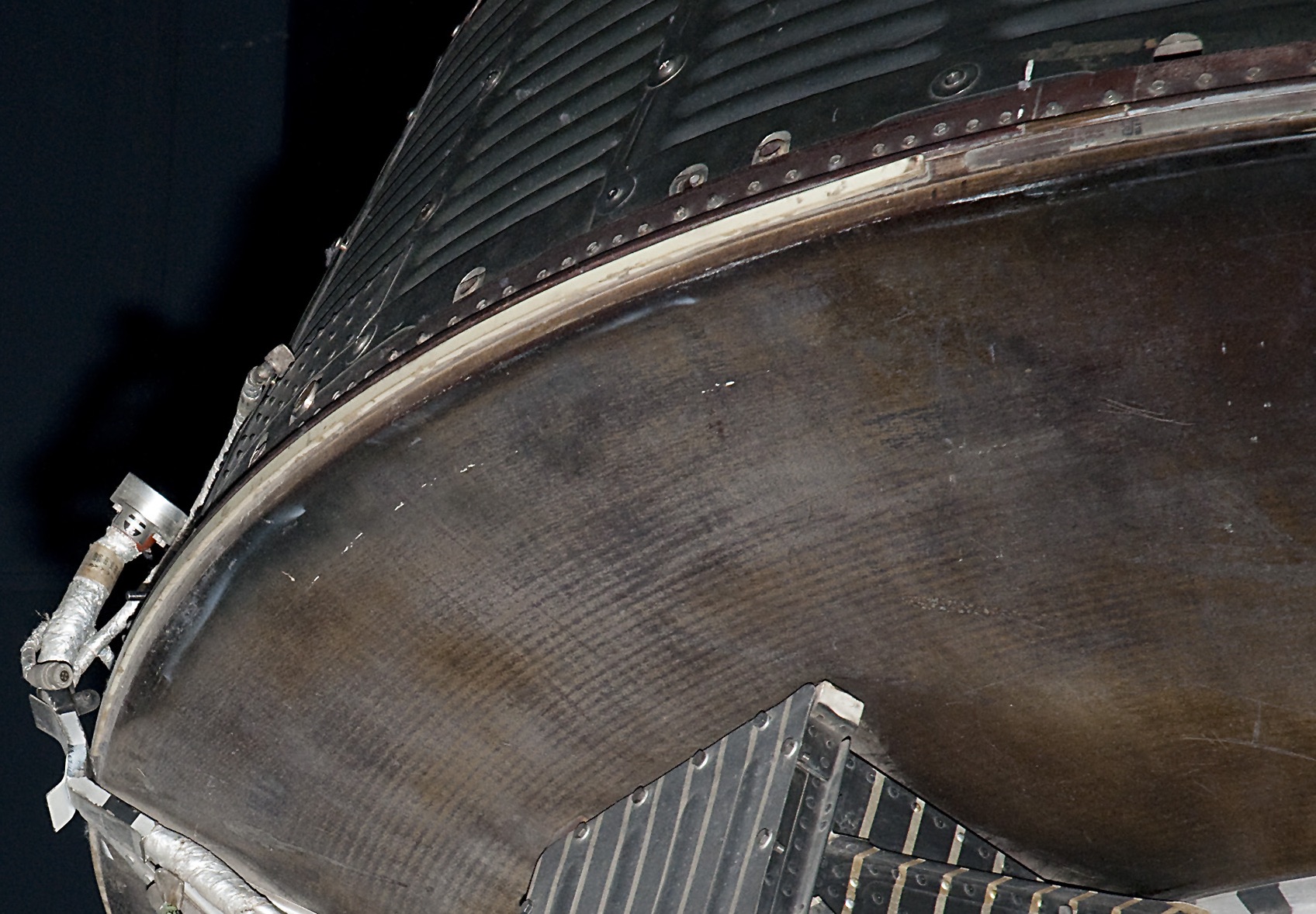 The linked document also contains a section describing the difference made to production shields, with Appendix C providing more detail on the actual construction process. 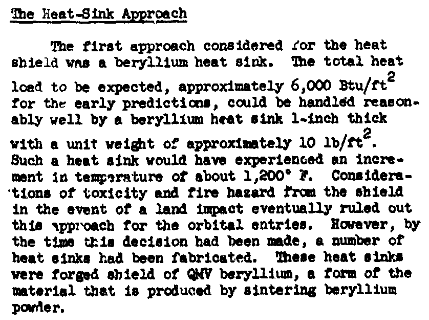 So two manned ballistic flights were done using a heat-sink, not an ablative heat shield.

I found an image of such a heat sink. 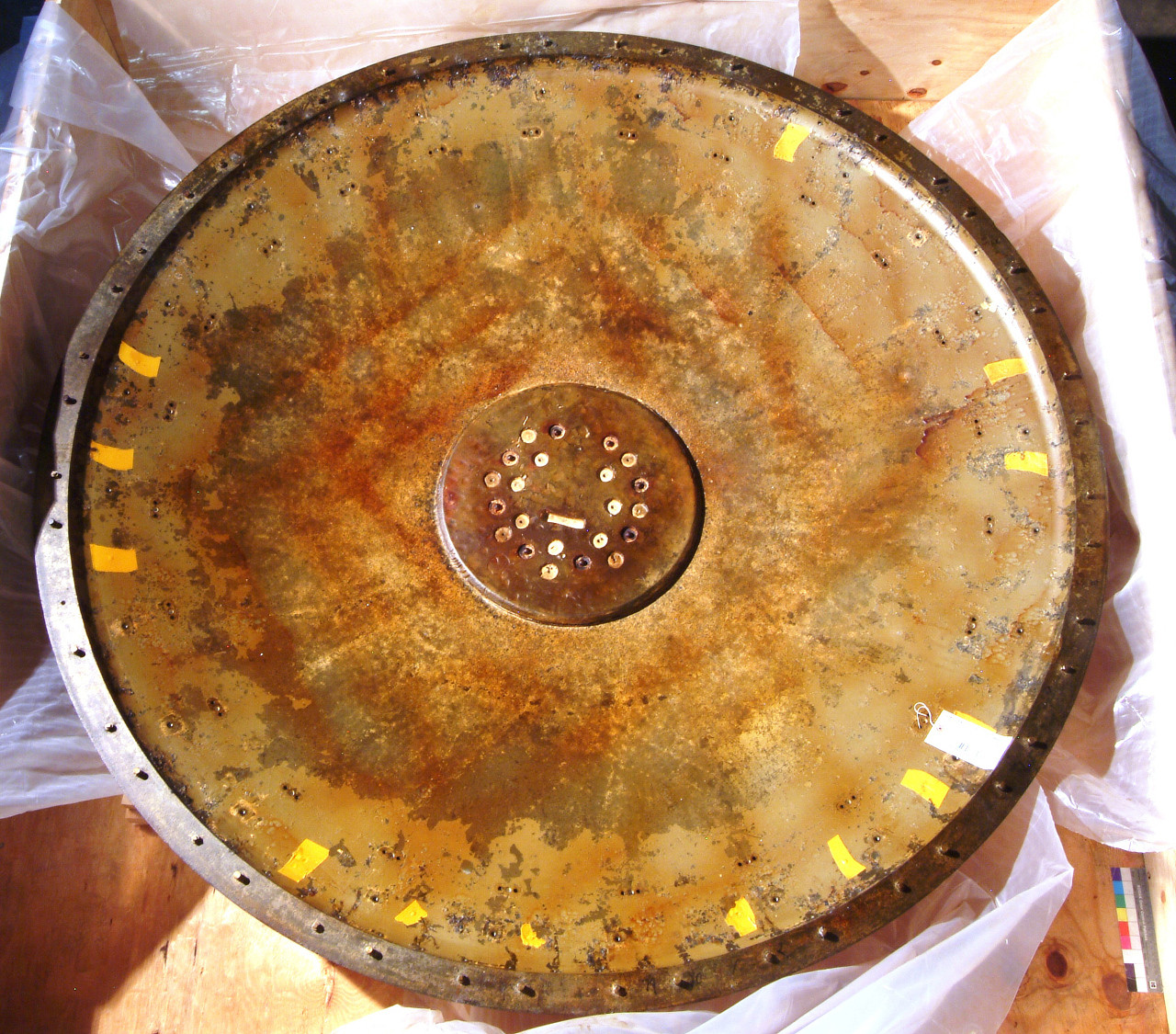 This is a replacement "heat sink" heatshield for the Mercury-Redstone 2 capsule. The original was lost after recovery of the capsule from the ocean and this heatshield did not fly in space. The MR-2 capsule carried Ham, a chimpanzee, on a suborbital flight in January 1961. Heat sink heatshields absorbed the tremendous heat generated during the capsule's reentry and were used only during some early Mercury test flights before they were replaced by ablative heat shields.

Image and Quote from the Smithsonian

Not the answer you're looking for? Browse other questions tagged history materials thermal heat-shield project-mercury or ask your own question.

7
Are black and white stripes any better than uniform gray for thermal control?

10
What is the outside of the Soyuz capsule covered in?
14
What improvements have SpaceX made to their proprietary Phenolic Impregnated Carbon Ablator (PICA-X) heat shield?
6
Why is the Heat Shield of ESA's Solar Orbiter Black in colour?
0
Shuttle silica ceramics black tiles
2
How do Stirling radioisotope generators maintain a temperature differential in a vacuum?
9
Who was the first to successfully implement on practice ablative heat shield?
4
Why were the Little Joes launched from Virginia?