Does a fully fuelled Starship in LEO have 0kg payload to Jupiter?

So I was looking into the payload mass a fully fuelled Centaur V could send to Jupiter and used the formula in presented in this answer to create a C3 graph. For a bit of fun I also looked into the payload capacity of Starship and was surprised to find out that it had 0kg capacity to that orbit; it reaches 0 at 63.37 $km^2/s^2$, well short of the ~82 $km^2/s^2$. The graph is based on the C3 graph presented here. Is my working out incorrect or does a fully fuelled Starship seriously not have the ability to send a payload to Jupiter? This is somewhat pertinent given questions like this.

On a side note, I also did delta-v calculations for it and found that it has plenty of payload to Jupiter; 86 tons. Are the delta-v assumptions from this graphic too optimistic or can delta-v not be used to predict payload mass or is this graph correct and the C3 graph incorrect?

edit: So I also looked into the EUS deep space capabilities and this one confuse me. The engineering parameters come from this document. The lunar payload of the EUS here has greater capacity then what is shown in this C3 graph, which makes sense because EUS when riding on SLS B1B is deployed on a suborbital trajectory and would lose some performance. However once we get to Jupiter it ends up being 2.83 tons, well short of the 8 tons of SLS B1B, which doesn't make sense given that it's performance should be boosted. Is this method of calculating C3 performance just inaccurate? (@uhoh help please)

This is only a partial answer, but there are two major factors that make the performance of the three vehicles not comparable at all.

There are two reasons why Starship is so much worse for missions with a large C3, and both are design features:

First, it's built to land (repeatedly) on planets. This makes it a lot more sturdy than other second stages. The dry-to-wet weight ratio is about 10 for Starship and around 20 for the other two. 90% fuel compared to 95% fuel makes a huge difference: Compared to F9SS it produces 30% less $\Delta v$.

Note that this is not related to the sheer size of the rocket, Starship being almost 20 times heavier than the other two, but only the ratio of fuel to dry weight is relevant.

Both factors together give Centaur a performance that is 40% higher than Starship if they both start fully fueled from LEO. Obviously this is not a fair comparison because only Starship can be refueled, but it gives an impression about the differences between the vehicles. On the other hand, we're discussing the small payload performance limit, which gives the first stage of each launcher the chance to take over a large part of the propulsion needed to get to LEO, i.e. the second stages will be rather full when reaching LEO.

Here's a plot comparing the estimated real performance of a half full F9SS (in yellow) and a refueled Starship (in purple). If we add refueling capability to F9SS we end up with the blue curve. Likewise, if we remove the sturdiness for landing from Starship and make it 50% lighter we end up with the green curve. 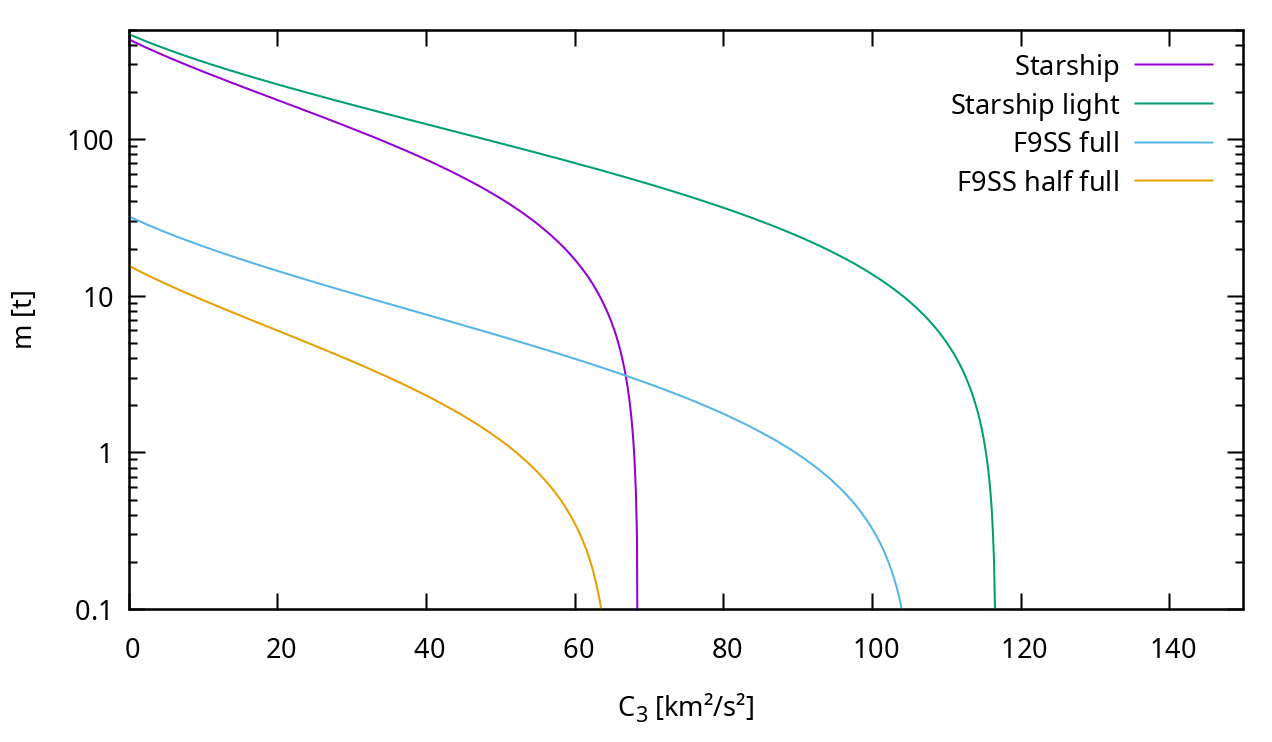 Please note that this plot is only valid for the case of LEO as a starting point, which is not correct. With a light payload the second stages can get to a much higher orbit before refueling and therefore can reach a much higher C3.

Not the answer you're looking for? Browse other questions tagged deep-space spacex-starship delta-v mass-fraction or ask your own question.

7
Generating plot of LV's performance as a function of the C3 parameter
1
"NASA's Europa Clipper has been liberated from the Space Launch System" How would the "physics" of a Starship-based mission differ from SLS?

8
How is "payload to LEO" estimated for a launcher?
14
Why are rocket mass on the launch pad and payload mass to LEO not strongly correlated?
25
How will SpaceX Starship deploy its payload?
19
Why doesn't Starship have four landing legs?
13
Why does the Starship methane header tank have so many holes in it?
7
Why doesn't the BFR/Starship have a launch escape system?
6
How much fuel, (in tons) will a dedicated tanker be able to deliver to a starship in LEO?
3
How does a Starship nose cone/fairing maintain its structural integrity?
4
Does the SpaceX Starship plan to have landing legs?
4
Does Starship reuse actually serve a purpose for Mars, or only LEO/Earth-to-Earth?