Did the Apollo Command module really "skip" within, or off of the atmosphere as a part of its reentry program?

This answer to a question about the Shuttle reentry begins:

but Wikipedia's Boost-glide; Reentry vehicle use is less assertive about the "skippiness" of Apollo's reentry:

The technique was used by the Soviet Zond series of circumlunar spacecraft, which used one skip before landing. In this case a true skip was required in order to allow the spacecraft to reach the higher-latitude landing areas. Zond 6, Zond 7 and Zond 8 made successful skip entries, although Zond 5 did not. The Chang'e 5-T1, which flew mission profiles similar to Zond, also used this technique.

The Apollo Command Module used a skip-like concept to lower the heating loads on the vehicle by extending the re-entry time, but the spacecraft did not leave the atmosphere again and there has been considerable debate whether this makes it a true skip profile. NASA referred to it simply as "lifting entry". A true multi-skip profile was considered as part of the Apollo Skip Guidance concept, but this was not used on any crewed flights. The concept continues to appear on more modern vehicles like the Orion spacecraft, using onboard computers.

On the other hand, if the vehicle enters above the upper boundary (overshoots), it won’t experience enough drag and may literally skip off the atmosphere, back into space. If designers aren’t careful, these competing requirements may lead to a reentry corridor that’s too narrow for the vehicle to steer through!

Which to me seems to invoke "skip" without the necessity of any drag; an elliptical or hyperbolic trajectory can simply loose some velocity while passing through an atmosphere, perhaps as an aerobraking maneuver with or without using lift, but I don't see how that would be called skipping. "Skip" doesn't appear in that Wikipedia article.

(comments) If the IMU fails and they need to have a backup alignment on the Gyro Display Couplers, then they should use stars Vega and Deneb. Aligning to them would represent the following attitude; roll, 078; pitch, 223; yaw, 340. Although they are extending the length of the entry by invoking the skip-out software, they will not be exiting the atmosphere so therefore they should use the part of the EMS scroll that pertains to a non-exit entry. When making a check of the horizon angle 30 minutes prior to Entry Interface, their pitch angle should be 298°. In a conventional entry, P64 is followed by P67. For a skip-out re-entry, P65 and 66 are employed to handle the exit and entry parts of the skip. In this case, because they are extending the re-entry but not actually skipping out, P66 will not be invoked and instead, P65 will lead directly to P67. The crew are also informed that they may not be in a full-lift (heads-down) attitude when they enter P67.]

I don't understand that explanation, but I think that I understand that the capsule's reentry attitude produced both drag to loose energy and lift, and I'm guessing that the lift was employed to (at least) lower the rate of descent into the denser atmosphere until more velocity could be shed in order to reduce peak heating.

I also understand from the Wikipedia article that not all would like to describe this as an actual atmospheric skip, but I don't know if it's because the capsule never left and then reentered the atmosphere, or because it never even had a lift-driven ascent phase.

Question: What exactly was the planned trajectory for the Apollo capsule during reentry? Did the rate of descent flatten to zero? Did it change sign and rise at some point?

"bonus points:" Does "skip" even have a clear definition? Must it be due to lifting force or can any atmospheric trajectory that has a period of rising that follows a period of falling be called a "skipping" trajectory?

Text quoted here is from a presentation by John Burton called Introduction to Apollo Entry Guidance and Flight Performance Sorry about the giant block quote but it all seems relevant. Emphasis mine. Sounds like they defined a "skip" as the vehicle aerodynamic load falling below 0.2 g.

Addressing the part of the question "Did it (the trajectory) change sign and rise at some point?" - yes, as shown in this plot from NASA Technical Note D-6725 APOLLO EXPERIENCE REPORT – MISSION PLANNING FOR APOLLO ENTRY) Points where the trajectory inflects upward are marked by me. 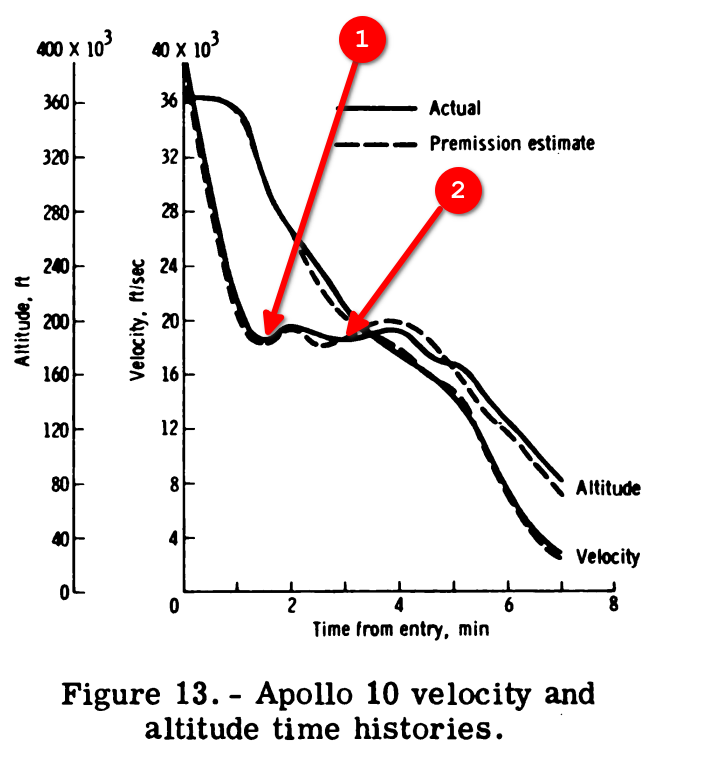 A controlled (or guided) skip entry could be flown to reach landing sites 1800 nm to 2500 nm from EI. During a controlled skip, velocity on the trajectory is below circular velocity to ensure re-entry will occur within the lifetime of the spacecraft life support system and batteries. The sequence of guidance phases for an Apollo skip entry was: Pre-entry, Initial roll, Huntest/Constant drag, Upcontrol, Kepler, and Final Phase. 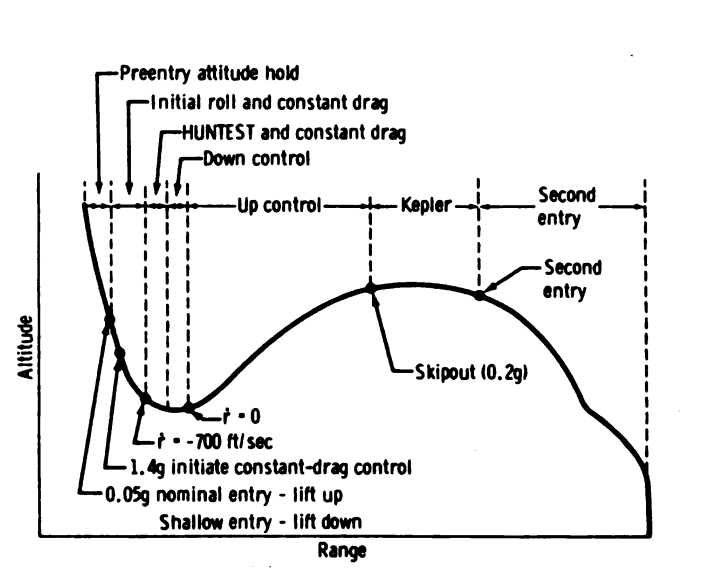 If the Apollo guidance logic determined that a controlled skip was required, a lofted trajectory was computed. The portion of the trajectory during which the vehicle aerodynamic load fell below 0.2 g was called the Kepler or ballistic phase. Active control of roll angle was suspended until the aerodynamic load exceeded 0.2 g once again.

The major advantage of a skip phase was the ability to reach a downrange landing site not attainable using the direct entry approach. Another advantage was the ability to skip out of the atmosphere and radiate thermal energy acquired during the first atmospheric entry. In addition, the capability to fly over inclement weather in the primary landing zone and land in an alternate area with acceptable weather was important.

Some disadvantages of the skip phase include the possibility of large landing dispersions due to atmospheric, aerodynamic, model, and navigation state uncertainties. Also, sensitivities to hardware errors could result in large landing dispersions. Other disadvantages include the possibility of an uncontrolled skip out of the atmosphere, difficulty in crew monitoring of the skip phase, possible incompatibility with backup modes of entry, and potential excessive g-loading during the second atmospheric entry.

During a direct entry, the vehicle remained in the atmosphere for the duration of the entry. The vehicle descended to the point of maximum aerodynamic load, close to where the negative descent rate was arrested. Thereafter, guidance could loft the trajectory to reach a downrange target, but the aerodynamic load would not fall below the 0.2 g level. The trajectory could rise and fall in altitude until the final phase of entry guidance was initiated. The usual sequence of guidance phases of the direct Apollo entry was: Pre- entry, Initial roll, Huntest/Constant drag, and Final Phase.

Since the time duration of a direct entry is shorter than a skip, the integrated heat load is lower. Other advantages include smaller landing dispersions due to atmospheric, aerodynamic, model and navigation state uncertainties. In addition, the system would be less sensitive to hardware errors throughout the direct entry mode. The direct entry mode also provides more capability to monitor the flight trajectory, compatibility with backup modes of entry, and moderate ranging for weather avoidance (used for the Apollo 11 flight). Disadvantages include limited weather avoidance capability, potential excessive g- loading during atmospheric entry, and an inability to fly the CM to long-range landing sites.

However, Apollo 11 flew a lofted trajectory that did not include a skip. During the transearth leg of Apollo 11, unacceptable weather conditions threatened the primary landing area. The vehicle was re-targeted approximately 200 nm downrange to avoid this weather. The “Upcontrol” phase of the guidance was used to loft the trajectory and fly the CM further downrange. However, the aerodynamic load never fell below 0.2 g, therefore, the skip guidance logic was not used.

During entry, the guidance provided a planned skip trajectory (Kepler Phase) resulting in a double-peak heating rate history. The CM was first subjected to a maximum heating rate of 83 Btu/ft 2 /sec followed by a cooling to 19 Btu/ft 2 /sec, and a second peak of 43 Btu/ft 2 /sec. The entry heat load was approximately 20,000 Btu/ft 2 as planned. The landing, approximately 200 nm short of the recovery ship, was determined to be caused by an inaccurate preflight estimate of the trim angle of attack [Hillje]. The flight data showed the trim angle of attack to be higher than predicted in the hypersonic region, which resulted in an 18 percent lower L/D. The lower L/D and steeper than planned entry interface flight path angle were the main contributors to the range short fall [Postlaunch...]. The main parachutes deployed at 23,787 ft altitude and the spacecraft splashed down at 18:49 UT, 93 minutes after liftoff. Splashdown occurred in the Pacific Ocean at 16.11 N, 168.97 E, roughly 430 nm SE of Wake Island and 200nm from target. The capsule was recovered by the aircraft carrier U.S.S. Hornet at 03:17 UT.

Not the answer you're looking for? Browse other questions tagged apollo-program history reentry mission-design or ask your own question.

43
Why didn't the Space Shuttle bounce back into space as many times as possible so as to lose a lot of kinetic energy up there?
3
Would it be possible to avoid the heat-from-friction problem when re-entering the atmosphere by performing (vertical) "U-turns"?

12
Did the Apollo command module have an abort mode?
23
How does skipping off the atmosphere work?
13
How much reentry speed did the Shuttles shed by doing a series of sharp turns?
12
What did Apollo need the crewed Command Module for?
3
Mathematically, what is the argument in favor of skipping reentries?
22
Why can't you just parachute down right from orbit?
18
Is there such thing as plasma (from reentry) creating lift?
9
How do we control a Reentering Capsule in the denser part of the atmosphere?