Are submarine launches horizontal? is a general question and specifies by name two large ICBMs which are likely to need to be launched vertically.

Since the large naval submarines usually come ready-made with torpedo tubes, there are certainly rockets that launch from them that later break the surface and fly in the atmosphere, but the examples I've found are all weapons that target things on or near the surface of the Earth.

Question: Has a rocket launched from a torpedo tube ever reached space? It could be a test or one-time demonstration, it doesn't have to be a production design. 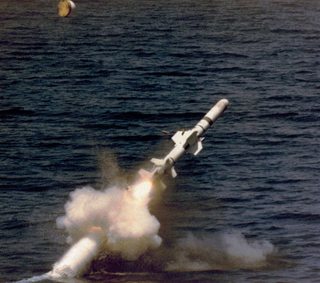 The Exocet SM39 is an old version introduced 1985 for submarines. It used a solid rocket engine, the maximum distance was only 50 km. Wingspan was 1.09 m.

So all these examples of cruise missiles that can come out of torpedo tubes are designed for horizontal short distance sub sonic flight using wings. Two of them are equipped with air breathing turbojets. Mass less than 1000 kg, diameter less than 400 mm, length less than 5 m. Is there any example of an orbital rocket being so small and single stage?

Shtil' is 14.8 meters tall and 1.9 meters in diameter. It weighs about 39.3 tonnes (metric tons) at liftoff, three stages. It can come out of submarine launch tubes.

So a torpedo tube seems to be much too small for an orbital rocket with a small payload.

Not the answer you're looking for? Browse other questions tagged launch history military weapon sea-launch or ask your own question.

8
Has Earth ever sent out a repeating signal into space?
2
Ejection charges on Dnepr Rocket tube?
6
Has SpaceX applied for license to broadcast video from space?
2
Does (or has) the US military launch anything besides weapons and weapons tests into space themselves?
6
Is there, or has there ever been anything remotely like an electron microscope in space?
25
Which has been the most gregarious rocket, launched from the most sites?
35
Has any spacecraft ever been flown manually to orbit?
5
space piracy, has it ever happened?
15
Who proposed detonating gunpowder on the moon to prove a rocket reached it?