How many solar system bodies have "knees" in their atmospheres?

Discussion lead to citing Why does Earth's atmospheric density have a big "knee" around 100 km? Is there a good analytical approximation? who's answer is "monatomic oxygen". For some reason above 100 km O2 tends to split into two single atoms of oxygen and because they are lighter the exponential drop-off of density with altitude slows down.

Apparently this is not happening so much for N2 compared to O2 which suggests that that 1:4:9 monolith that the aliens put in LEO that was supposed to stay there ended up reentering the atmosphere a few billion years ago when the Great Oxidation Event happened, so they had to come back and put a new one on the Moon.

If we had a nitrogen atmosphere without such a pronounced knee the ISS wouldn't have to boost itself nearly so often.

Question: How many solar system bodies have pronounced "knees" in their atmospheres? These could be due to monatomic oxygen or any other atmospheric constituent. I'm just curious if this anatomical-like feature is unique to Earth or if it's been seen elsewhere in the solar system.

From Why does Earth's atmospheric density have a big "knee" around 100 km? Is there a good analytical approximation?: 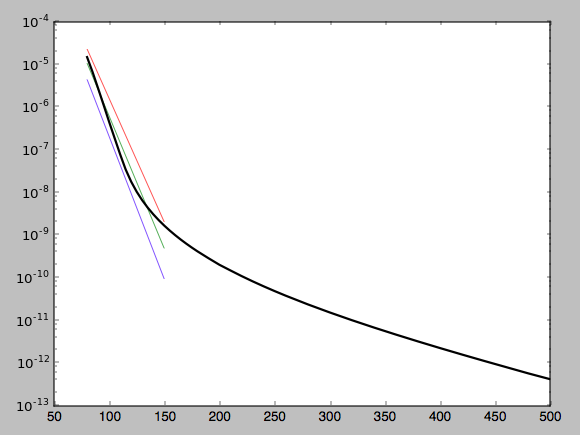 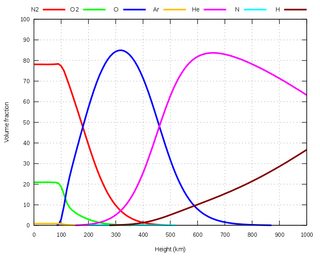 Not the answer you're looking for? Browse other questions tagged reentry atmosphere planetary-science atmospheric-drag solar-system or ask your own question.

8
Why does Earth's atmospheric density have a big "knee" around 100 km? Is there a good analytical approximation?
4
Did the Space Shuttle crew have to worry about the ionosphere? What relevant training or specific briefings did they receive?
3
Would the >100 km "knee" in Earth's atmosphere still be where MFP exceeded scale height if it were pure Ne or Ar?

9
Can you have a rainbow on any bodies in the solar system besides Earth?
5
How do we measure the atmospheres of Solar system planets?
11
Where can I find data for Atmospheric density vs. altitude?
9
How many satellites would be required for Solar System GPS?
8
Why does Earth's atmospheric density have a big "knee" around 100 km? Is there a good analytical approximation?
4
What is the atmospheric composition of Venus at the 34 mile (50 km) altitude of the proposed HAVOC program?
7
Any additional information required for colonising these rocky solar system bodies?
4
Did the Space Shuttle crew have to worry about monatomic oxygen?
3
Would the >100 km "knee" in Earth's atmosphere still be where MFP exceeded scale height if it were pure Ne or Ar?
0
How many planets have had their limbs scanned with radio signals?