Are spacecraft star cameras ever used as scientific instruments for research?

There are quite a lot of spacecraft that have been up there a while and a lot of them have star cameras for attitude determination and for attitude control. Space telescopes (both heavenly and Earth-observational) need to point carefully and these may have especially nice star cameras.

Those integrated years of observation makes them potentially attractive candidates for secondary science observations, though not all of their systems may allow for extraction of scientifically useful images.

Question: With all of those eyes intently trained on the stars, are spacecraft star cameras ever used as scientific instruments for research?

The nasa.gov featured news item NASA’s Juno to Get a Close Look at Jupiter’s Moon Ganymede mentions two cameras whose purpose is to look at stars will be used to count high energy electrons, though this is not using the camera as an imaging device per se (the camera's lens is not used to produce a real image):

Normally, Juno’s Stellar Reference Unit (SRU) navigation camera is tasked with helping keep the Jupiter orbiter on course, but during the flyby it will do double duty. Along with its navigation duties, the camera – which is well shielded against radiation that could otherwise adversely affect it – will gather information on the high-energy radiation environment in the region near Ganymede by collecting a special set of images.

“The signatures from penetrating high-energy particles in Jupiter’s extreme radiation environment appear as dots, squiggles, and streaks in the images – like static on a television screen. We extract these radiation-induced noise signatures from SRU images to obtain diagnostic snapshots of the radiation levels encountered by Juno,” said Heidi Becker, Juno’s radiation monitoring lead at JPL.

Meanwhile, the Advanced Stellar Compass camera, built at the Technical University of Denmark, will count very energetic electrons that penetrate its shielding with a measurement every quarter of a second. 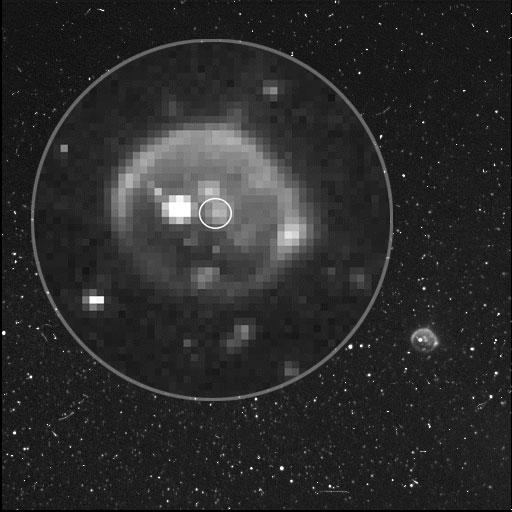 Juno's Radiation Monitoring Investigation collected this image of Jupiter's moon Io with Juno's Stellar Reference Unit (SRU) star camera shortly after Io was eclipsed by Jupiter at 12:40:29 (UTC) Dec. 21, 2018. Io is softly illuminated by moonlight from another of Jupiter's moons, Europa. The brightest feature on Io is suspected to be a penetrating radiation signature. The glow of activity from several of Io's volcanoes is seen, including a plume circled in the image. CREDIT NASA/JPL-Caltech/SwRI 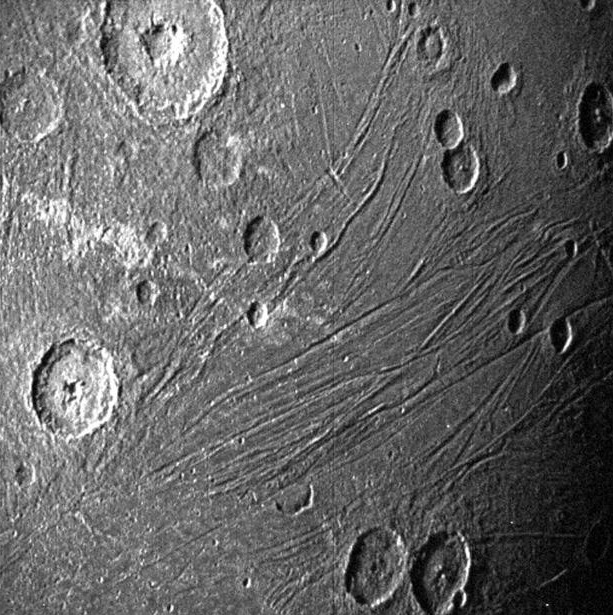 This image of the dark side of Ganymede was taken by Juno's Stellar Reference Unit navigation camera during its June 7 flyby of the moon.

Video linked in this answer to Does Juno's UVS have any chance to spot Europa plumes? showing Juno's Stellar Reference Unit being used to track showers produced by high energy charged particles incident on the camera.

Its main job is to spot the stars, but an ultrasensitive navigation camera on NASA's Juno spacecraft is returning amazing images of Jupiter's rings, auroras, lightning, and even its moonlit dark side.

Scientists discussed the results from the camera alongside other Jupiter revelations during a briefing Dec. 12 at the American Geophysical Union's annual meeting in Washington, D.C. Juno is approaching the halfway point on its primary mission, with its 16th science pass by the planet set for Dec. 21.

That camera is called the Stellar Reference Unit, or SRU for short. According to Heidi Becker, Juno's radiation monitoring investigation lead at NASA's Jet Propulsion Laboratory in California, the camera's "day job" is to cut through interference from the intense radiation surrounding Jupiter to spot the stars, comparing them to a database to figure out Juno's precise location and orientation during its 53-day, elongated orbits of the gas giant. 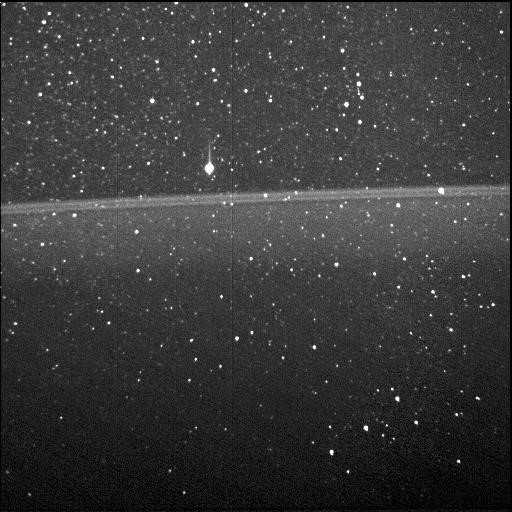 This is the first view ever taken from inside Jupiter's rings, snagged by Juno's Stellar Reference Unit camera during its first science encounter with the planet on Aug. 27, 2016. The three stars of Orion's Belt can be seen in the lower right, and Betelgeuse shines just above the rings. (Image credit: NASA/JPL-Caltech/SwRI) 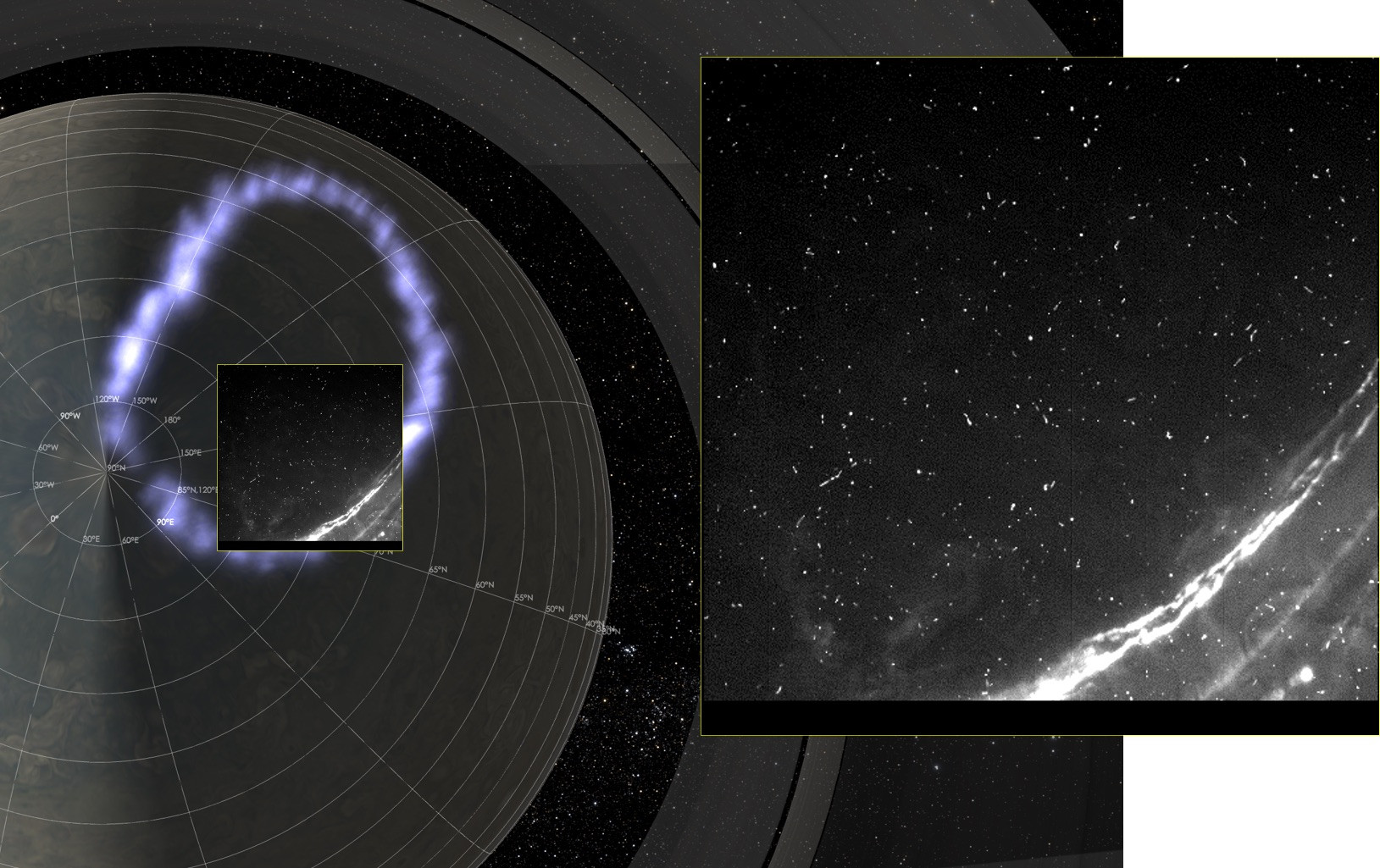 The Stellar Reference Unit camera, which helps Juno navigate during its mission at Jupiter, snapped this close-up view of the northern aurora on the planet's dark side — the closest visible-light view of the phenomenon ever taken. (Image credit: NASA/JPL-Caltech/SwRI)

"This is another first: This is the closest view of Jupiter's aurora that has ever been made by a visible[-light] camera," Becker said. "It's an amazing complement to what Juno is already bringing back in the ultraviolet and in the infrared. And, again, we're seeing amazing structure because of the high resolution of the camera and Juno's close flight to the camera."

This image also reveals another dot of lighting, in the lower right, and the squiggles of high-energy electrons beaming off the planet's poles — "so SRU was doing three kinds of science when it took this picture."

"It's really exciting to see what we can see out of an engineering camera, and we're really erasing all the boundaries between who or what can make a contribution to engineering or science or art," Becker added.

[...]All previous optical observations of Jovian lightning have been limited by camera 36 sensitivity, proximity to Jupiter, and long exposures (~680 ms to 85 s) hence some measurements were likely superimposed flashes reported as one. Here we report optical observations of lightning flashes by Juno’s Stellar Reference Unit with energies of ~105 -108Joules, flash durations as short as 5.4 ms, and inter-flash separations of tens of milliseconds. The observations exposed Jovian flashes with typical terrestrial energies. The flash rate is ~6.1×10-2 flashes/km2/yr, more than an order of magnitude greater than hitherto seen. Several flashes are of such small spatial extent they must originate above the 2 bar level, where there is no liquid water.

note: These two images are from Juno's ultraviolet spectrograph and are of supplementary interest only. 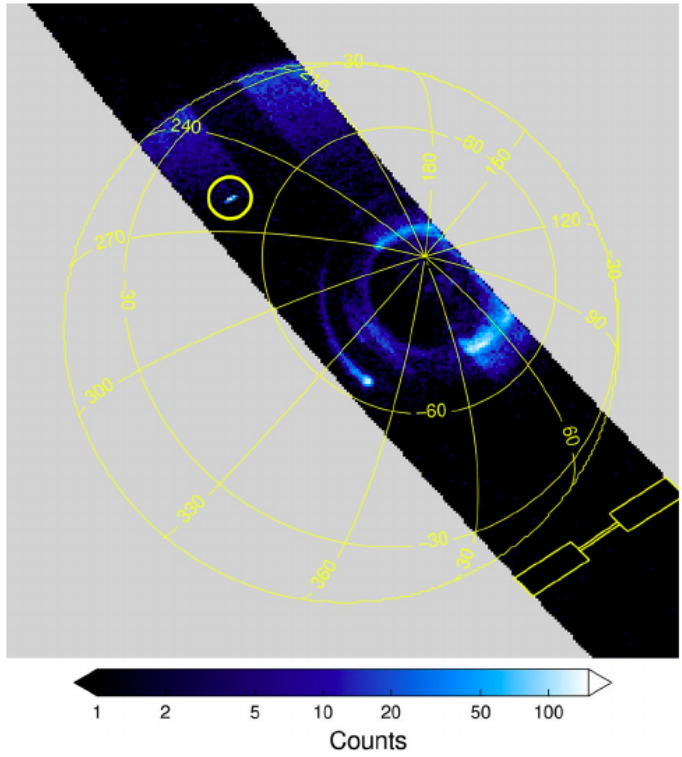 Figure 1. A spatial map of Juno ultraviolet spectrograph measurements during a single spacecraft spin at PJ26 (10 April 2020). The color scale shows the number of photons counts measured. The shape of the instrument slit is shown in yellow in the lower right corner (widths of the both the wide and narrow slits increased by a factor of 5 for clarity). A bright flash is highlighted by the yellow circle. This flash is also shown in Figure 2j 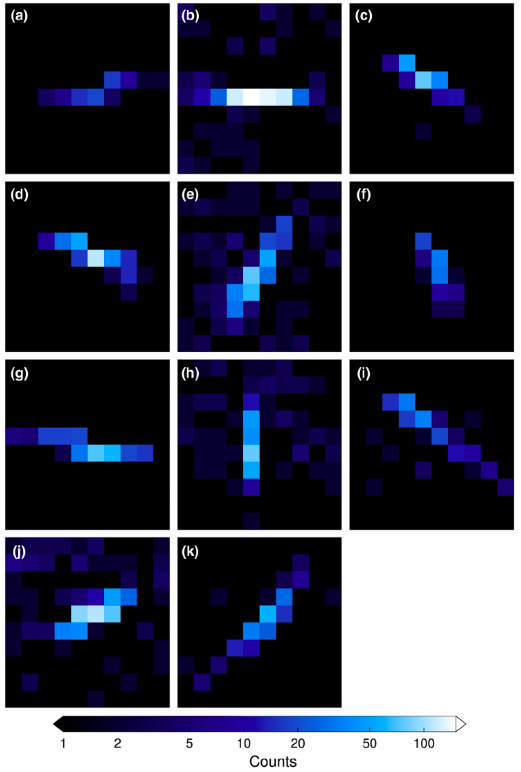 Figure 2. Images of 11 bright flashes observed by Juno ultraviolet spectrograph. The labels relate the images to the bright flashes described in Table 1. The color scale shows the number of photons counts measured. Each image has dimensions 1° × 1° on the sky. Panel (j) shows the same bright flash as Figure 1.

Not the answer you're looking for? Browse other questions tagged imaging space-telescope camera or ask your own question.

12
Interstellar eavesdropping
5
Does Juno's UVS have any chance to spot Europa plumes?

4
Why are CCD cameras still used, not CMOS for live view from the rocket?
2
What causes these cross-shaped artifacts in TESS' first images?
2
How are cameras arranged and used to monitor activities outside the ISS?
2
What are current challenges if any for cameras in space?
3
What were the relative orientations of the Hubble Space Telescope's three star cameras, six rate gyros and four reaction wheels optimized for exactly?
0
How did Japan’s Hayabusa 2 mission "make extensive use of deployable cameras to get scientific imagery"? Did it ever produce a "PR selfie"?