(screeshot to be deleted as soon as MathJax is complete) 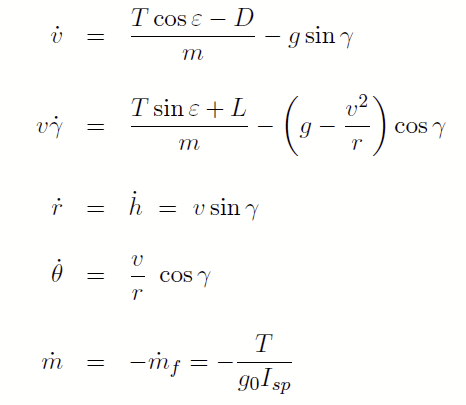 I can do that, but I am wondering if it's a bad idea. I am thinking there would be numerical problems especially at the start of the trajectory, where you are taking the difference of two vectors that are relatively close in magnitude - the velocity of the rocket and that of the atmosphere, both in the inertial frame. Subtracting two big things close in magnitude generally gives you an inaccurate result. Maybe the accuracy is good enough that it doesn't matter, but was curious if anyone had experience trying this.

For the aerodynamic calculations only, you should convert the rocket's position, velocity, etc. from inertial to rotating-surface-relative coordinates before doing the work. This way the atmosphere's velocity is always low -- zero, in fact, if you assume the atmosphere rotates with the Earth instead of modeling winds. The lift and drag calculated in the surface-relative frame will still be valid in the inertial frame.

Immediately after launch, you'll be working with very small values for both rocket and wind speed, so any errors you have will be tiny. If you work with both rocket and wind speed in the inertial frame, you'll be working with two quantities near 400 m/s near liftoff -- not all that large, as Organic Marble notes -- and will lose a little precision, but in practice even that is probably okay -- lift and drag are proportional to the square of airspeed, so they'll be very small near liftoff compared to their peak values.

Not the answer you're looking for? Browse other questions tagged orbital-mechanics simulation or ask your own question.

13
Why did the rendezvous attempt fail on Gemini 4?
8
How to get earth-centered, earth-fixed coordinates from Skyfield?
6
What is this algorithm to calculate orbital state vectors?
5
Simulate celestial body motion on hyperbolic trajectory (2D)
3
How does one calculate the argument of periapsis of an orbit after an arbitrary maneuver?
5
Can I exclude coriolis effects if I express a rocket launch in an inertial reference frame for a rotating earth?