Quite some lateral wobble immediately following Antares Orb-2 liftoff. Is that normal?

During the initial liftoff phase though, I've noticed rather strong lateral movement of the launcher that I don't recall being that pronounced during previous Orbital Sciences Antares launches: 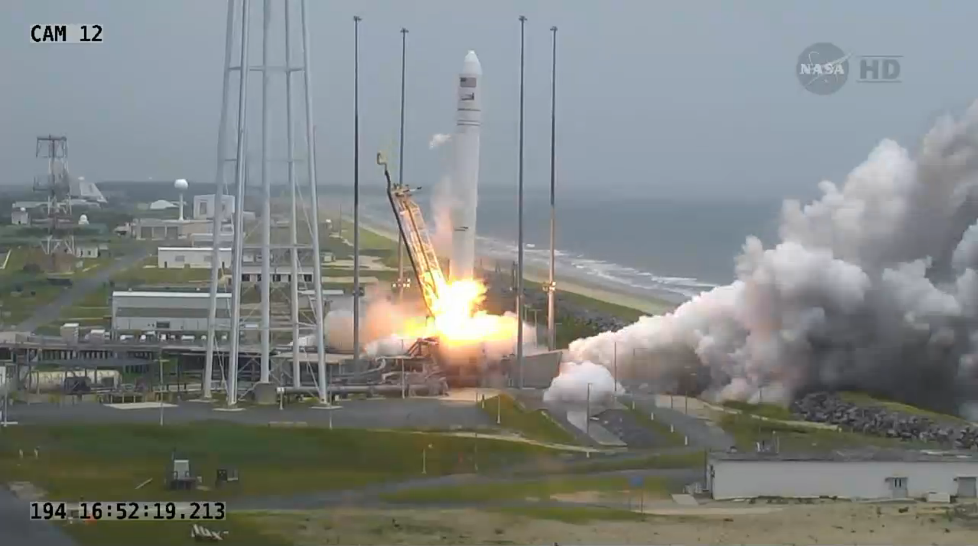 Edit: Here's a YouTube video of the launch (high definition here) for those that missed it, or would like to see the liftoff sequence again. The part I'm asking about is in the first 10-15 seconds of the video.

I do recall "some" such movement from previous launches, but not as profound. If I had to guess, I'd assume some angle is "nominal" and intended for the rocket to clear launch site installations like the umbilical grapple and the rocket stand. But here's the thing, that I believe those lightning towers surrounding the rocket are connected up top with a set of cables, with their inner square being quite a bit tighter than the distance between the four towers. So my question:

Is it "normal" for the Antares to "tilt" at such angle and drift from the stand immediately following ignition and before clearing the launch site, and what is the maximum lateral movement it could tolerate to successfully clear the launchpad?

I asked NASA via Twitter about it hoping they answer it during the Orbital Sciences/Cygnus-2 Post-Launch News Conference, but Stephen Clark from SpaceflightNow.com beat me to it and asked Frank L. Culbertson, Jr., Vice President and General Manager of Orbital's Advanced Programs Group, this very same question over the phone. It can be seen in this video roughly 1 hour 19 minutes into it. Here's a transcript:

Stephen Clark, SpaceflightNow.com: At the launch video, it looks like there's a little bit of a tilt of the vehicle coming off the pad. Is that a normal maneuver or something unexpected?

Frank Culbertson, Orbital Sciences Corp.: You asked about what some of us call "the wiggle of the pad", others call it The Baumgartner Maneuver, but it was a little bit more pronounced today, or maybe we could just see it a bit better.

As the rocket lifts off, it actually moves the tail of the rocket closer to the structure, so that it then flies away from the structure. That's to protect the tail and the surrounding hydraulic equipment and the electrical cables from the blast of being too close to the rocket. It's only a degree or so, but it is sometimes visible, depending on the viewing angle.

Yes, it is a heart-stopper when you see it and you don't expect it, but it was all as it should have been.

This so called Baumgartner Maneuver, named after Paul Baumgartner, Master Engineer at Orbital Sciences, is additionally explained by antonioe in one of the NASASpaceflight.com Forum posts, also regarding Antares:

What you saw MIGHT be the "Baumgartner Maneuver" - an initial pitch AWAY from the TEL makes the TAIL of the rocket actually get CLOSER to the TEL ... but then the resulting (small) lateral acceleration carries the rocket AWAY from it ... this maneuver had to be very carefully designed, a trade between the initial tail movement towards the obstacle which is the inevitable result of the pitch, and the desired effect...

I was told (by Paul B. himself) that the pitch-away and the resulting tail-towards-TEL motion would be so small that they would not be perceptible ... maybe he was not counting on telephoto lenses and HD video (and sharp NASASpaceflight subscribers...)

And therein is described what I believe was the reason for the somewhat more pronounced effect of this maneuver this time around, as captured by the broadcast cameras - their position relative to the launchpad must have been slightly different than during previous Antares launches from Wallops and they captured this Baumgartner Maneuver better.

As for the second part of my question, what is the maximum lateral drift that would still permit the launch vehicle to navigate through the cabling between the four lightning towers, it seems I assumed wrong and the Mid-Atlantic Regional Spaceport Launch Pad 0-A doesn't use any cables between them at all, like e.g. those at the Cape Canaveral Air Force Station Space Launch Complex 40 do. This becomes more apparent by looking closer to some of the photographs of the Launch Pad 0-A, for example these posted on Spaceflight101.com page to Cygnus Orb-2 Mission Updates.

So, judging by the photographs, the maximum tilt of the launch vehicle during liftoff could be several degrees more, and it would still be able to clear all the launchpad installations (mainly TEL or Transporter/Erector/Launcher and the umbilical cabling).

This is speculation - not a complete answer.

The smoke blowing off the pad made me take a gander at http://www.wunderground.com/weather-forecast/US/VA/Wallops_Island.html for today July 13th, 2014 AD

The graph shows the barometer falling between 1213 through 1320 - the time-frame corresponding to the launch. There is a corresponding rise in the wind-speed ; 1km/h from E at 1219 to 6km/h from SE.

I would speculate there may have been a sharper spike than predicted/observed/reported on wunderground.com - enough to cause the observed wobble

Not the answer you're looking for? Browse other questions tagged launch nasa launch-site antares or ask your own question.

8
If Country A's rocket hits an incorrectly declared satellite of Country B, which institution can arbitrate the dispute? Under which international law?