This 700 m/s maneuver that was avoided got me thinking and then CNN's NASA mission will zoom by asteroid before returning sample to Earth said:

"Leaving Bennu's vicinity in May puts us in the 'sweet spot,' when the departure maneuver will consume the least amount of the spacecraft's onboard fuel," said Michael Moreau, OSIRIS-REx deputy project manager at NASA's Goddard Space Flight Center in Greenbelt, Maryland, in a statement.

"Nevertheless, with over 593 miles per hour (265 meters per second) of velocity change, this will be the largest propulsive maneuver conducted by OSIRIS-REx since the approach to Bennu in October 2018."

While OSIRIS-REx's 265 m/s delta-v maneuver seems quite large, they don't state that it's the largest ever, which leads me to wonder which one was.

Question: What is the largest single burn spacecraft delta-v in deep space?

Please exclude 2nd stages and kick stages and consider only the final deep-space spacecraft itself. Is it one of the flying fuel tanks's burn to be captured by a gas giant, or is it a six month uninterrupted "burn" of DAWN's ion engine, or something else entirely?

The winner is Magellan's orbital insertion at Venus at ~2.69 km/s (calculated). However, it is up for interpretation on whether or not you think Magellan's STAR-48B counts as "part of final deep-space spacecraft itself". It did make the 15 month interplanetary journey to Venus, but was jettisoned after orbital insertion.

DAWN is a strong contender with its ion propulsion system; however, it never continuously thrusted more than 2.7 km/s at a time according to this statement from Garner et al. "Ion propulsion: An enabling technology for the Dawn Mission" (2013):

For the first 2.75 years of cruise to Vesta IPS was operated at full power thrusting at seven-day thrusting periods (thrust arcs) with off-times for data playbacks and command uplinks limited to approximately six to nine hours.

In total during cruise to Vesta DAWN contributed more $\Delta V$ than Magellan: 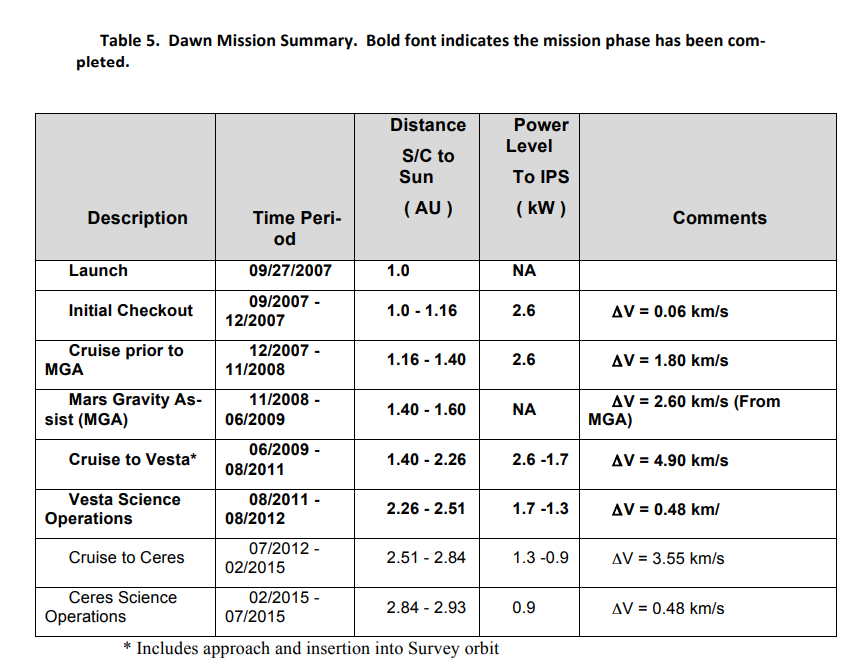 Orbital insertions at outer planets (all 3 of them; Galileo, Cassini, Juno) haven't been record maneuvers because launch/throw mass constraints dictate that they insert into highly elliptical orbits to avoid requiring as huge a propellant load. All had insertion burns of well under 1 km/s.

If Magellan doesn't count then the winner is, surprisingly, Mariner 9 at 1.53 km/s (calculated). Mariner 9 was the first spacecraft to orbit another planet.

Not the answer you're looking for? Browse other questions tagged orbital-mechanics history delta-v record or ask your own question.

14
Flying fuel tanks! Which deep-space spacecraft had the largest fuel mass fraction?
5
Why is NASA proposing an EMEJ (MEGA) trajectory for Europa Clipper instead of EEJ?
1
How long can the dawn probeŌĆśs ion thrusters burn?

10
Delta-v of deep space maneuvers in deep space missions like Voyager or Pioneer
27
What's the largest single object payload ever lifted into space?
3
What is the largest delta-v ever produced in space from mechanically stored energy?
5
What's the largest optical lens put in space?
7
Trivial lower bounds for single point mass delta-v problems?
4
How much delta-v does the Orion spacecraft have?
6
What spacecraft has had the greatest total propulsive delta-v?
6
Largest solar panel (by area) deployed in space? Largest below/at/above GEO?