Are Solid State Hard Drives in space made from radiation-hardened FLASH memory, or do they just use older technology with higher voltage and charge?

Answers to Why is the James Webb Space Telescope's data storage space so small? have got me thinking.

Solid State Hard Drives (SSDs) are usually made from FLASH memory though alternatives like magnetic memory also have their place in space.

The unit cell of FLASH memory is a very well isolated capacitor on which charge is introduced by tunneling at high(ish) voltage.

The charge can stay there for years or centuries potentially, we rely upon this vanishingly-low discharge rate when we put something important on an SSD or USB stick and expect it to stay there indefinitely. We sometimes even casually toss flash drives from spacecraft and assume they'll get to Earth with data intact! 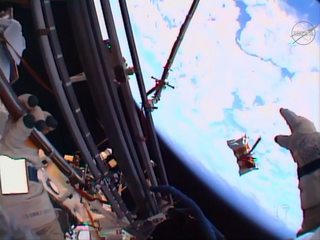 Flash memory gets smaller and denser by making the devices smaller, and as a consequence, the oxide gaps and voltages and amount of charge on each capacitor get smaller as well.

It gets even smaller by going analog sort-of, by storing eight different levels of charge on one capacitor, so that the difference between one value and the next is a small fraction of the total charge.

Ionizing radiation in a space environment will pass through electronic devices and leave trails of charge; electrons separated from their atoms. My concern is that this process can eventually change the amount level in a FLASH memory bit's capacitor enough to change the logical value it is assigned upon readout at some later date.

As SSDs are built larger in storage and smaller in size, stored data integrity may become more susceptible to ionizing radiation in space.

Question: Are Solid State Hard Drives in space made from radiation-hardened FLASH memory? Or do they just use older technology with higher voltage and charge rating that is less susceptible to ionizing radiation? Or is something else done, or is this not actually a problem at all?

32
Why is the James Webb Space Telescope's data storage space so small?
8
What will happen to the Russian messages flash drive?
5
Has magnetic core memory been used beyond the Moon?
5
How does the Perseverance Rover store/process large quanties of images?
1
Magnetic Memory to Mars?

1
Magnetic Memory to Mars?
5
Has magnetic core memory been used beyond the Moon?