Is it possible to throw a baseball so hard it circles the earth above your head?

Assuming the earth had no atmosphere, and you could throw a baseball as fast as you wanted to, and you were standing on the surface of the earth, is it possible to throw the baseball so fast that it circles the earth and flies over your head above the height you threw it at?

But could you throw it even faster so that it passes you above your head?

I think this is not possible, because if you threw it even harder, the orbit would just become elliptical and the ball would still arrive at your head height. Even if you angled it slightly up or down, it would still only arrive back to your at head height. Right?

It's because baseballs are not rockets. They can't circularize their orbits once they have some altitude. Right?

Yes, but only because the Earth rotates. If you throw the ball, you will end up in a slightly different spot. If you were at a high point at the equator and threw the ball due East at higher than orbital velocity, you would rotate by the time the ball came back and it would be slightly over your head, because you have moved to a different spot in the orbit. The lowest point in the orbit, however, would be where you released the ball.

If Earth also didn't rotate, it would return at whatever point you released the ball at. Most people don't throw a ball over their heads, so...

On a perfectly spherical, atmosphere-free Earth, with no obstacles as tall as you, with a uniformly spherical gravitational field, it would be possible; the low point of the orbit would be at the altitude you threw the ball from, a couple of meters above the surface.

No. It would come back to exactly the height* from which you threw it, unless you threw it so hard (i.e., at "escape velocity") that it did not come back at all.

The elliptical trajectories all return to their starting point, but the shape of the ellipse (i.e., it's "eccentricity") and how long it takes to return depends on how hard you throw it.

* Not just exactly the same height, but also, if you're plotting its position in an inertial coordinate system that is at rest with respect to the common barycenter of the baseball and the planet, and if no other forces besides gravity act on it, then it will come back to exactly the same place where it left your hand.

But also note, if the planet is rotating, then it's highly likely that you will no longer be in that place when the ball comes back to it.

you can't throw it so that it lands behind your feet. if it doesn't hit halfway around the world, it will return to your hand, because elipse

A circle is a subset of ellipse, and a circular orbit can (on a theoretical, magical, non-rotating, vacuum Earth) be thrown. A slightly slower orbit might reasonably be thought to hit your knees (to avoid hitting the antipodal soil), but it would no longer be circular but again elliptical, with a greatly shifted major axis, since you would be releasing it at its apogee rather than perigee.
You might also note that you can slightly shift the elliptical axes of this almost circular orbit, by aiming slightly above or below your shoulder at the 'horizon' (minor axis).

In addition to the argument about the earth rotating, it is also possible because you don't release the ball from your head, you release it from your hand. By the rules of 2-body problem orbits, the orbit will always intersect with the release point. This point is in front of you. So in theory one could have an elliptical orbit which is at a higher altitude above your head before intersecting with your hand.

This means you need to throw the ball downward, not horizontal or up. That will cause the ball to be coming down when it completes the orbit. This of course, is a challenge because the earth is going to get in the way of your ball. If it wasn't there, it would be easy to achieve your goal.

As such, I would say you need to climb Mt. Everest, and throw the ball with a slight downward angle. You also should release the ball as high as you possibly can. I don't think this can be done if you release at shoulder height, just due to geometry. To have the path go above your head and then hit shoulder height at the release point would require a very steep angle... meaning you had to throw it downrward more -- and you're more likely to intersect the earth.

Beyond that, it's just a geometry game. You need a pitch that's high enough (near head level) that when you look at the perigee of the orbit, it doesn't intersect the ground.

On the other hand, if we start asking how you manage to accelerate the ball that fast, we might be talking about a long robotic arm. If its long enough, that could make the geometry easier because it permits a shallower angle while still being able to go overhead.

Of course, the easy answer is to throw the ball goofy, holding you hand up above your head and releasing it there.

Newton had about the same idea. He pictured a canon on the top of a mountain, shootig a bullet horizontally with different speeds: 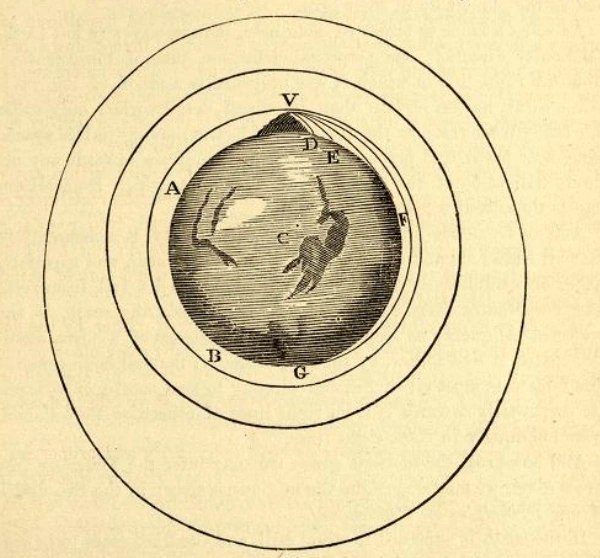 You are incorrect in saying that the ball ends up in an ellips. That is, the circular orbit lies exactly between elliptical, parabolic (escape), or hyperbollic orbit. It can end up on an ellipse but then it maintains its height. For every distance there is a circular orbit. So also for one above your head. Depending on your throwing skills the ball can end up on a circular orbit above your head, or through the windows of the white house, in the cereal bow of Byden.

I edit because I misunderstood the question. It asked if the ball can end up higher above you than the height from which you threw it away.
Say you throw it with such a speed that the orbit is circular. Now throw it again with a tiny higher speed, parallel to the Earth. What will the orbit be? It will be non-circular, that's sure (there is only one circular orbit for the height you throw it fro. So it has to be an elliptical orbit. All elliptical orbits are closed. So there is no way the thrown awsy ball will end up a bit higher than the point you threw it from because for all elliptical orbits a mass must pass the same point after a a full rotation, which is not the case if the point of the ball after one rotation doesn't coincide with the throwing point . You can try other directions but the same holds.

Objects can't spiral. Only if GW's are emitted. In classical mechanics this is not the case. So you might have a chance near a black hole.

So. If you throw the ball horizontally there are these possibilities:

-The ball lands on the Earth. Earth before reaching you. Somehere behind you.

-The ball orbits on an ellips with the Earth in a focus point.

-The ball shows a parabolic orbit and never returns, ending up with zero velocity at infinity.

-The ball's orbit is a pyperbole, ending uo with a non-zero velocity at infinity.

erm, let's rephrase that ... "easy".
(for a rather ludicrously hard version of the word "easy")

Just throw the ball at escape velocity-aLittleBit, so that it not only orbits Earth but reaches apogee of some several tens of thousands of km. Aim so the Moon's gravity slightly pulls this orbit, shifting the perigee up a bit. Done.

The lumpyness of Earth's surface and gravity field will cause less perturbation of the orbit than the more gross gravitation of the Moon, allowing enough predictability to the trajectory.

But why are you throwing stuff around Earth, when you could be the all-star ultimate baseball champion, EVAH!

As long as the ball is thrown at escape velocity (~11 km/s) its curve due to falling under gravity will be the same as the circumference of the earth - this is what a circular orbit is.

SoccoSocco
1
$\endgroup$
5
Add a comment  |
Highly active question. Earn 10 reputation (not counting the association bonus) in order to answer this question. The reputation requirement helps protect this question from spam and non-answer activity.

11
If you throw a baseball from the space station, will it return to you in 90 minutes?

12
What does the BackFlip lunar cycler do in its pass by Earth?
4
How do orbital elements change when force is applied orthogonal to the velocity vector?
10
Oberth is confusing me. Apparent violation of conservation of energy
4
"Pythagorean Three Body Problem" - need some points from an accurate solution for comparison
11
If you throw a baseball from the space station, will it return to you in 90 minutes?
9
Teleporting an object into geosynchronous orbit
1
Would it be possible to grab on to a satellite, and use it to keep yourself in orbit in an emergency situation?
0
Using a sling whirled around above the head, could someone on the moon throw a stone into orbit?