Were the Lunokhod Lunar rovers remote controlled in real time?

How were the Soviet Lunochod rovers during the 1970s controlled from Earth? Did they take images on the fly and a guy with a joystick steared it around to reach targets of opportunity? Well, probably not, but did they take advantage of the near real time radio communication?

Rovers on Mars are given a single batch of commands once a day. So while the roundtrip travel of light delay is no more than 8 to 48 minutes, a rover would be remotely operated at exactly the same pace even if it were on a moon of Neptune 4 light hours away. But the Moon is so close that the 2-3 second delay would be at most irritating until gotten used to.

Here's a lecture by Dr. Jeff Norris at JPL from 12 sep 2013. I really recommend it, a potentially easy solution on a seemingly unfixable problem:

He describes how time delays can be handled by human psychology by simulating and visualizing in real time what would happen if the given commands give the expected results. While he focuses speculative on using this on Mars, eliminating the 2-3 seconds delay on the Moon in a virtual way certainly seems very doable.

You can imagine this was difficult: the driver has to anticipate massively due to the communications delay and the image delay. The cameras had a dead zone right in front of the rover, so the driver would also have to remember previous images (and with 1970s technology, no easy way to recall the previous image on screen).
Each team worked a two-hour stretch before being relieved. 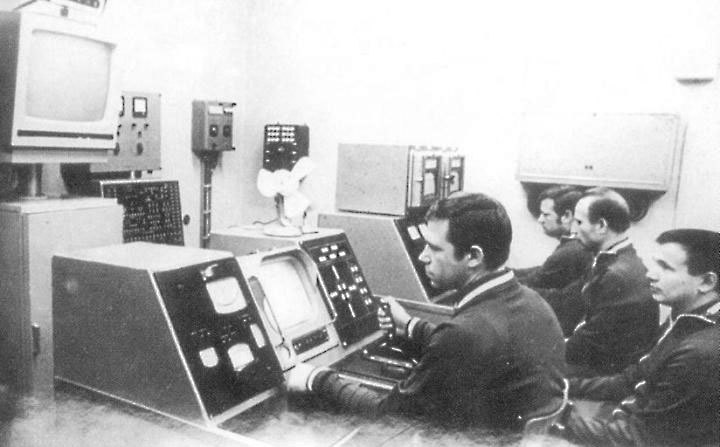 Yup, a guy with a joystick.

This is really an add-on to above, but joined just to mention it and accordingly don't have enough rep to make a comment; I think its important to point out that the low resolution of the Lunokhod B/W cameras (I believe <100 lines, but cant find a reference) combined with large delay between frames meant the first rover had to be brought to a stop for about 3 days around each lunar noon because with the moon being essentially monochrome to begin with, there were not enough shadows to navigate safely with the sun ~overhead.

And the politics of the time cause them to focus on covering distance, which was announced to the press every day, at the expense of stopping to take "high-res" images or do other science.

Video was better with L-2 than L-1 of course due to improvements in technology over time, but it still lead to the loss of the second rover due to misunderstanding the terrain they were driving through causing them to drive into a crater and then covering the solar panels in dust trying to back out, which doomed the mission.

Not the answer you're looking for? Browse other questions tagged the-moon rovers teleoperations lunokhod or ask your own question.

5
Does anyone have pictures of the “lunodrom” that Russia constructed to test the first rover?

28
What happens to defunct lunar and Mars rovers? What technological barriers prevent humanity from creating a perpetual rover?
12
Have there been any recent lunar rovers?
9
How will the Falcon 9 carry the lunar xprize rovers to the moon?
32
Why are there so few lunar rovers?
3
Why were we able to have a more or less real-time conversation with the Moon?
5
Are there any planned non-lunar, non-Mars rovers?
2
Why are the rovers finding the long Lunar night difficult to overcome?