Why did Mars Pathfinder have such a high atmospheric entry velocity?

I was wondering what the highest atmospheric entry velocity of any lander was at Mars, for direct-entry landers (as opposed to those released from an orbiter), the atmospheric entry velocity tends to range from 5.6 km/s to 5.8 km/s, this is the case for landers such as Mars 3, Spirit, Opportunity and Curiosity and this is the relative velocity to be expected for a Hohmann transfer from Earth to Mars.

On the other hand, for Pathfinder I've found reference to the atmospheric entry velocity being 7.5 km/s or even as high as 7.65 km/s, this is partly explained by pathfinder entering retrograde so the rotation of Mars is adding to the relative velocity instead of subtracting from it for a prograde entry, but this should only account for a difference of around 0.4 km/s, meaning that Pathfinder was still going more than 1 km/s faster relative to Mars than any other lander.

Initially I thought that the numbers for Pathfinder I had found might be wrong, but there are numerous references to a high atmospheric entry velocity, the most authoritative value I could find is 7.479 km/s from a paper by NASA/JPL based on an after the fact analysis of the mission: 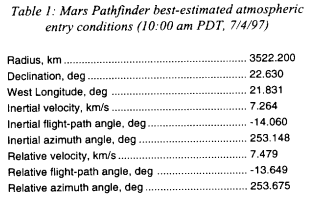 Based on my rudimentary understanding of interplanetary transfers, I would assume the high entry velocity is due to a slightly "off window" launch resulting in a sub-optimal encounter with Mars compared to a Hohmann transfer, however I could find little information about the launch or what might have made it unusual.

From my experience launch and arrival characteristics (velocities) are not strongly correlated for a given launch window, though I don't know why.

You may have heard of 'Pork Chop Plots' to describe (launch) C3 requirements (among other information) for an interplanetary transfer. Here is one I made for a project to send a lander to Venus: 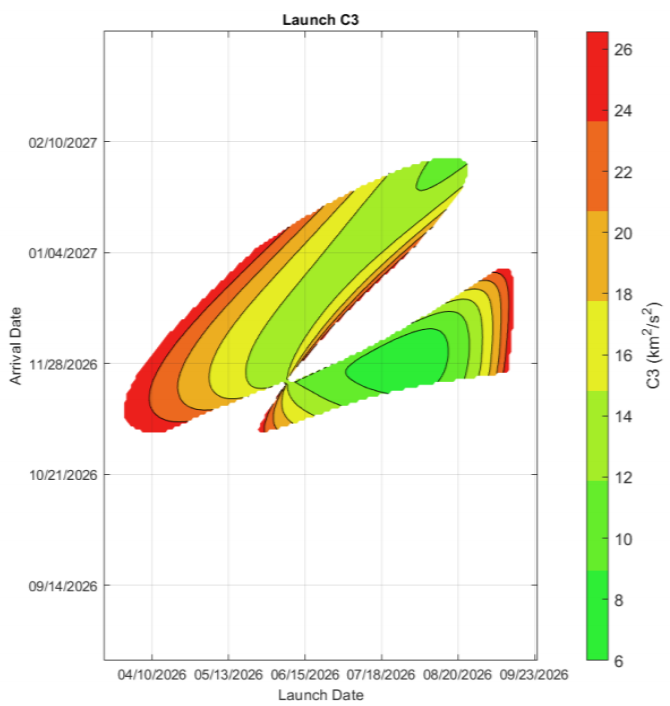 In compliment to determining launch C3 requirements you can also determine arrival characteristics: 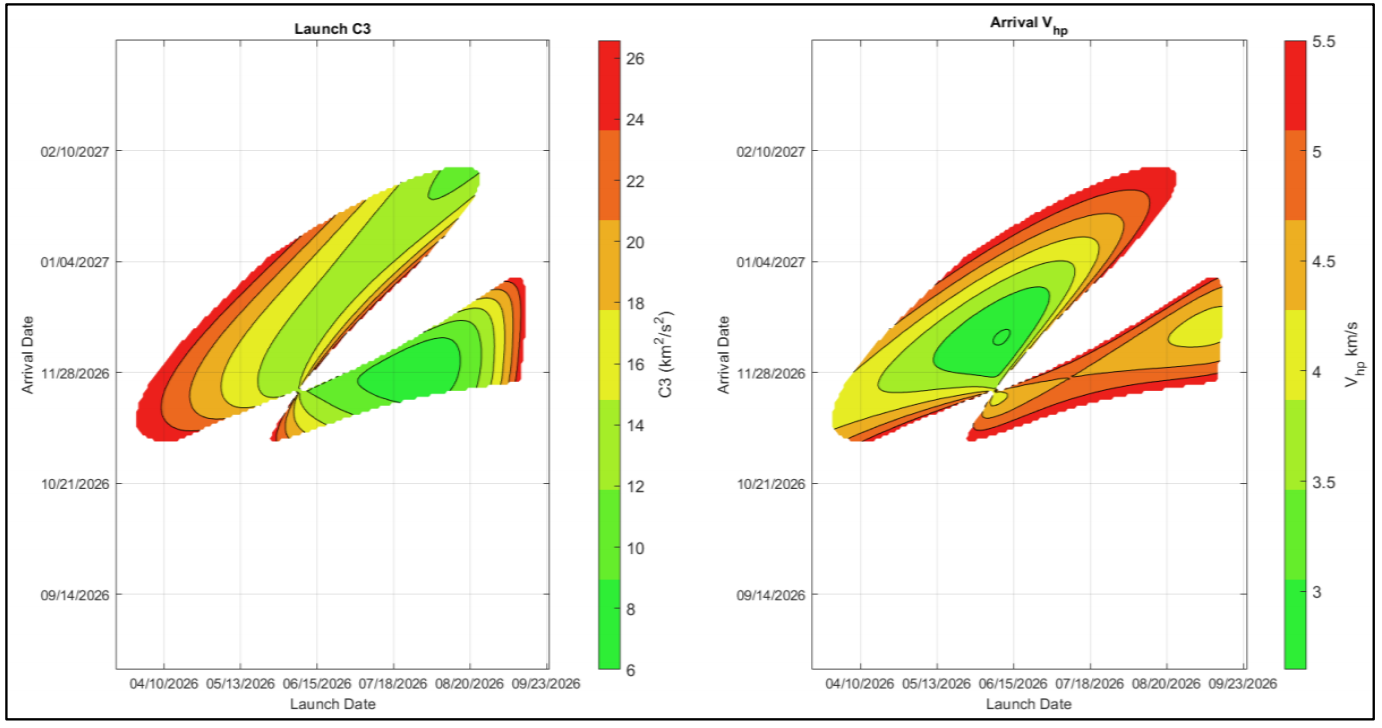 As is seen, the local minimum (in green) launch and arrival energies for a given time window do not necessarily match up. It should be noted that what is shown on the right hand arrival side is not entry velocity but hyperbolic excess velocity or the square root of C3, but this can easily be used to find entry velocity and is analogous to it (bigger value = higher entry velocity).

My best guess is that the need for launch vehicle performance (launch C3, left hand side) outweighed the need for a low energy arrival (entry velocity [analog], right hand side) and the ideal launch C3 coincided with a less than ideal arrival velocity for Mars Pathfinder. (Similar to what's shown in the image)

This is supported by the launch mass of 890 kg (NASA Pathfinder fact sheet) being very close to performance limit of its Delta II 7925 launcher (Delta II payload planners guide): 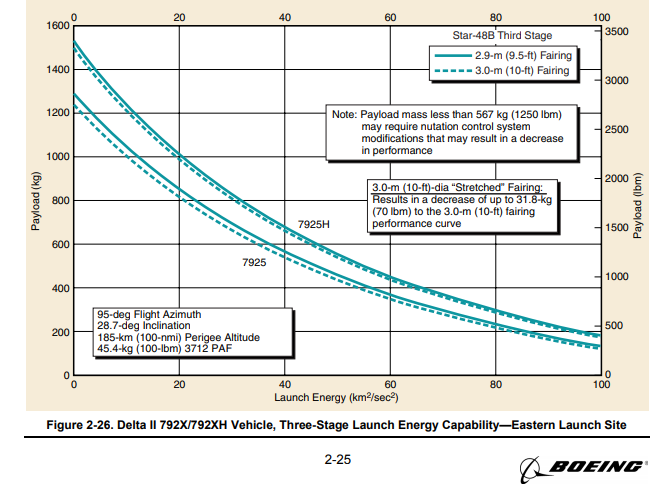 The fact sheet even mentions that it needed "a payload assist module", basically an extra stage to give it more oomph to get to Mars, so they really needed that ideal launch C3.

This alludes to an interesting paradigm shift in mission designer's thinking on launch vehicles. Classically, the launch vehicle has been the biggest cost component of a mission so many efforts were made to reduce the need for a larger more expensive launch vehicle. Nowadays launch vehicles are so powerful and 'cheap' that different concerns can be addressed with an off-nominal launch C3 requirement.

As a real world example, consider that the Mars Insight mission choose to take a C3 and launch vehicle performance penalty to launch from California instead of from Florida for a more efficient east coast launch. I don't think this had any real justification other than to let the California folk witness an interplanetary launch as the spacecraft was being shipped from Denver, CO anyways according to Wikipedia.

Not the answer you're looking for? Browse other questions tagged mars reentry pathfinder or ask your own question.

27
Why was InSight planned to launch from Vandenberg?
5
How much delta-v could be saved with a Hohmann-like transfer orbit to the aphelion of Mercury 's orbit instead of its perihelion?
3
First interplanetary launch from California! How far from Earth will InSight be when it separates from the Centaur 2nd stage?

31
Why not travel to Mars in 2 months?
8
For an EML-1 to Mars transfer orbit, would flying to the right or left of Earth be preferable?
38
What uses would the Aldrin-Cycler have?
11
Mars Orbit Upon Intercept
8
Difference in atmospheric entry for Earth and Mars
5
Is Mid-Air Deployment of the Mars Helicopter Feasible?
2
Is a ballistic blimp entry possible on this way?
5
Mars and back, staying only a few days
18
What if a Space Shuttle entered the atmosphere of Venus?
8
Would it be feasible to decelerate a crewed vehicle from ~25 km/s only using the atmosphere of Mars (in the context of an "express transit")?