Does the Juno spacecraft have an "open signal, by design"?

Everybody listens to everybody else's spacecraft's transmissions all the time in fact: Hijacked space data, notable instances of recovering images or other goodies from someone else's space mission? and there wouldn't be data in JPL's Horizons for some spacecraft if not for amateur trackers listening to the probes on the way to mars, decoding them and sharing the state vectors they contained (yes!) with the world (see this answer to Will the Emirate Mars Mission, Tianwen-1 and Mars 2020 Mission get closer to each other or spread out on their way to Mars?)

While the Chinese team successfully acquired signals from Juno and determined its orbit through subtle Doppler shift measurements, these actions went under the radar.

In response to a request from SpaceNews for comment on the test and if coordination has taken place, NASA Jet Propulsion Laboratory spokesman David C. Agle stated that the agency was not engaged in the activity.

Brian Weeden, director of program planning at the Secure World Foundation in Washington, told SpaceNews that the tests will be helpful, but don’t pose any threat.

“This is like a ham radio operator trying to tune into the most distant signal they can to test out the sensitivity of their equipment. Juno is broadcasting its carrier signal back toward the Earth and it’s an open signal, by design. Anyone, even hobbyists, who happen to have a powerful enough antenna can pick it up.

Now if Juno's signal was performing a secretly coded frequency hopping over a very large range of frequencies, or doing secretly spaced extremely wide band but short time-domain bursts so that it would be hard to "pick up" if you didn't know in advance where to look, it couldn't be tracked by DSN with range-rate and VLBI ΔDOR techniques. How do we track the exact location of the spacecraft which is millions or billions of miles away from us? So the spacecraft transmitting a continuous signal that any powerful antenna and a receiver could "pick up" is not really optional or by design; it's got to be that way.

Question: So I'm wondering if what "open signal, by design" really refers to is the modulation and encoding of the information within Juno's signals that is open?

It seems to me they made it as open as they could and still have it work, but that's probably not quite open enough to gather the signal on your own without some significant effort. The best source I've found on the signal itself is Juno Telecommunications (2012), with "Detecting Juno's ‘Heartbeat’" (2020) as runner-up, and Juno Raw Data (Level 0) Gravity Science Instrument Archive Volume Software Interface Specification as a distant third. There's also "The Juno Gravity Science Instrument" (2017), but I couldn't access anything past the abstract.

There are two signals from Juno, one at 8.4 GHz (X band) and one at 32.08 GHz (Ka band), which is considerably higher than the portion of Ka used for commercial satellite downlinks (17 to 21 GHz). The X band carrier is the primary mission link, which is used to send telemetry (BPSK modulated at 280 or 25 kHz, rate 1/6 turbo encoded under good conditions, as seen in the image below, or Reed Solomon interleaved depth 1 concatenated with (7,1/2) convolutional at as little as 10 bits per second), and data from all but one of the many science instruments. Jupiter is really far away, and Juno is solar-powered, so sometimes (this is planned to coincide with main engine burns, which implies to me that most of the antennas or the solar arrays get pointed the wrong way) the usual downlink modulation, as simple as it is, is too complicated for their 70-meter dishes to receive accurately, so they switch to a mode which does very slow FSK over 512 tones spaced by 40 Hz.

The Ka band transmitter duplicates what the X is doing, which is how the last science instrument works: they are measuring the higher order terms in Jupiter's gravity field by examining the variation in the gravitational Doppler shift applied to the signal. They send the same thing at two different frequencies in order to use the small differences between them to remove other effect sources, such as the Earth's atmosphere, from the science data. Every bit that lands, as the raw output of the phase-locked loop that runs in NASA's Deep Space Network receiving stations, and various further stages of processing them (for example, the camera images are 12-to-8-bit companded onboard, which needs reversing), are freely available to the whole world as soon as they can get them up on the web site.

It is in theory possible for a private citizen to duplicate all this effort, but even the retired microwave comms engineers I know don't own satellite dishes bigger than their house (they left those at work when they retired), and you can get all the data much more easily by FTP, so I don't know why anyone would bother to receive it directly on their own, except to brag that they'd done so. 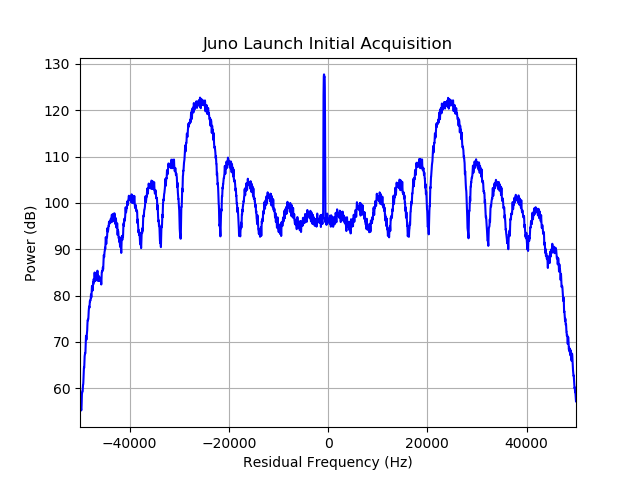 Not the answer you're looking for? Browse other questions tagged nasa radio-communication tracking data-transmission juno or ask your own question.

7
Hijacked space data, notable instances of recovering images or other goodies from someone else's space mission?
6
How do we track the exact location of the spacecraft which is millions or billions of miles away from us?
4
Alternatives to the X-Band
3
Will the Emirate Mars Mission, Tianwen-1 and Mars 2020 Mission get closer to each other or spread out on their way to Mars?
2
How, and How Well will Juno measure the effects of frame dragging? (GR effect due to Jupiter's mass & rotation)
2
Have any deep-space spacecraft supported same-band turnaround of Earth-based doppler measurements?
1
What is the highest non-optical frequency used or tested for use in deep space communication?

8
Does Juno use MPPT?
16
Resilience to data transmission errors of the Juno spacecraft
18
Why does NASA's Juno spacecraft only have a one year primary mission?
7
Why does the Juno spacecraft flyby Earth on the way to Jupiter?
4
Will there be joint observations from earth and the Juno spacecraft when it reaches Jupiter?
20
How long does it take for a signal to travel between Earth, and Juno at Jupiter?
54
Why wasn't an RTG used on the Juno spacecraft?
6
China, UAE and US all sending missions to Mars in 2020 (Summer of L̶o̶v̶e Mars); how far apart are their frequencies?
1
Just how raw is the rawest signal data that the Deep Space Network routinely records for safety reasons?