Are launch windows to Mars avoided if they result in landings during dust storm season?

This comment suggests that orbit before descent to Mars' surface allows a mission to delay the landing if the weather conditions are bad. I think that Tianwen-1 will be the first to put a lander rover on Mars from Mars orbit, but as @JohnHoltz points out in a comment below Viking 1 and 2 landers were deployed from Mars orbit.

From time to time Mars can have huge dust storms, with a good fraction of the planet's surface invisible from space due to the amount of particles blowing in the wind.

Question: Do these global dust storms have a particular "season" for happening, and are years where the launch window would result in landings during dust storm season avoided? 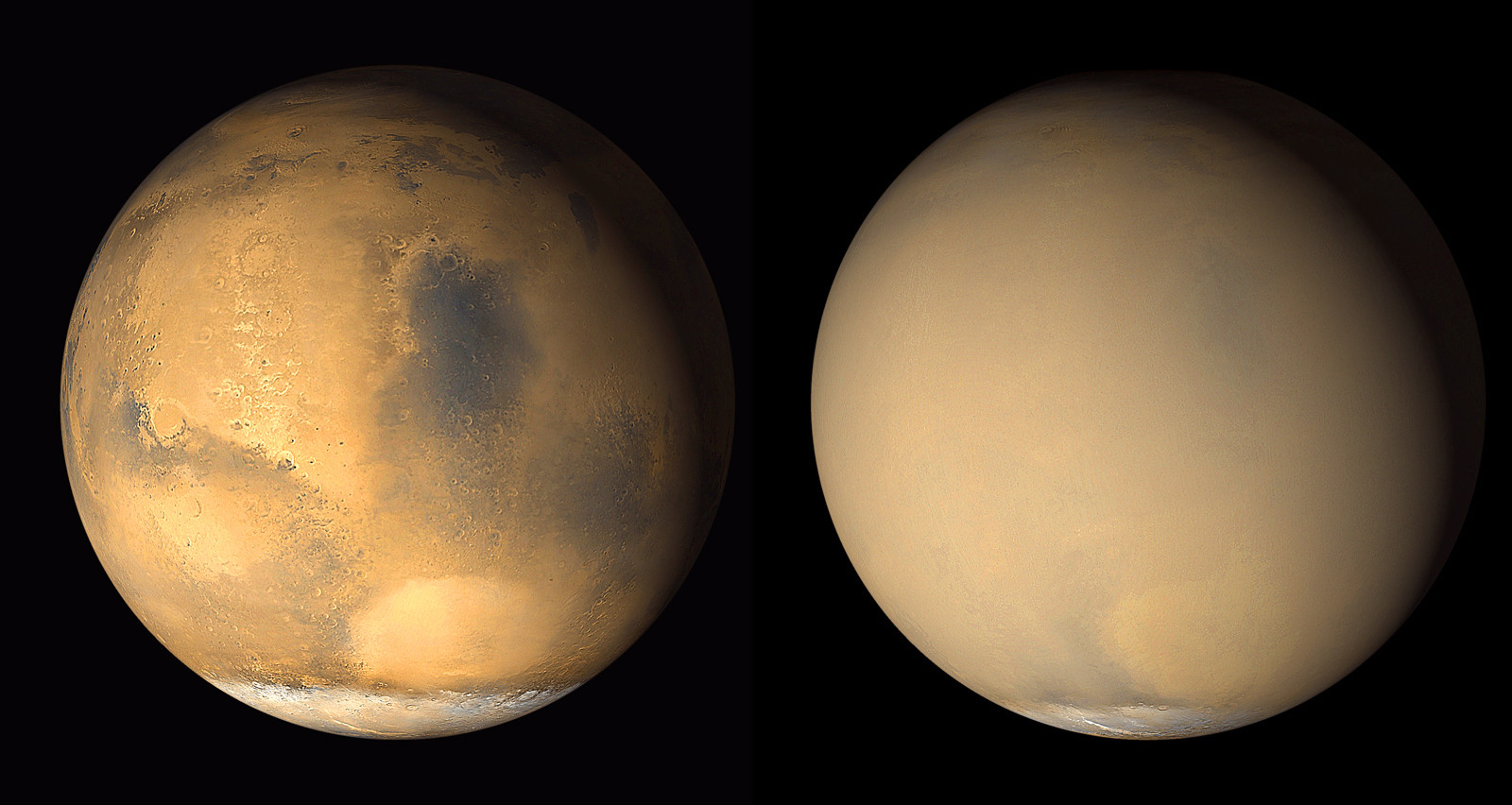 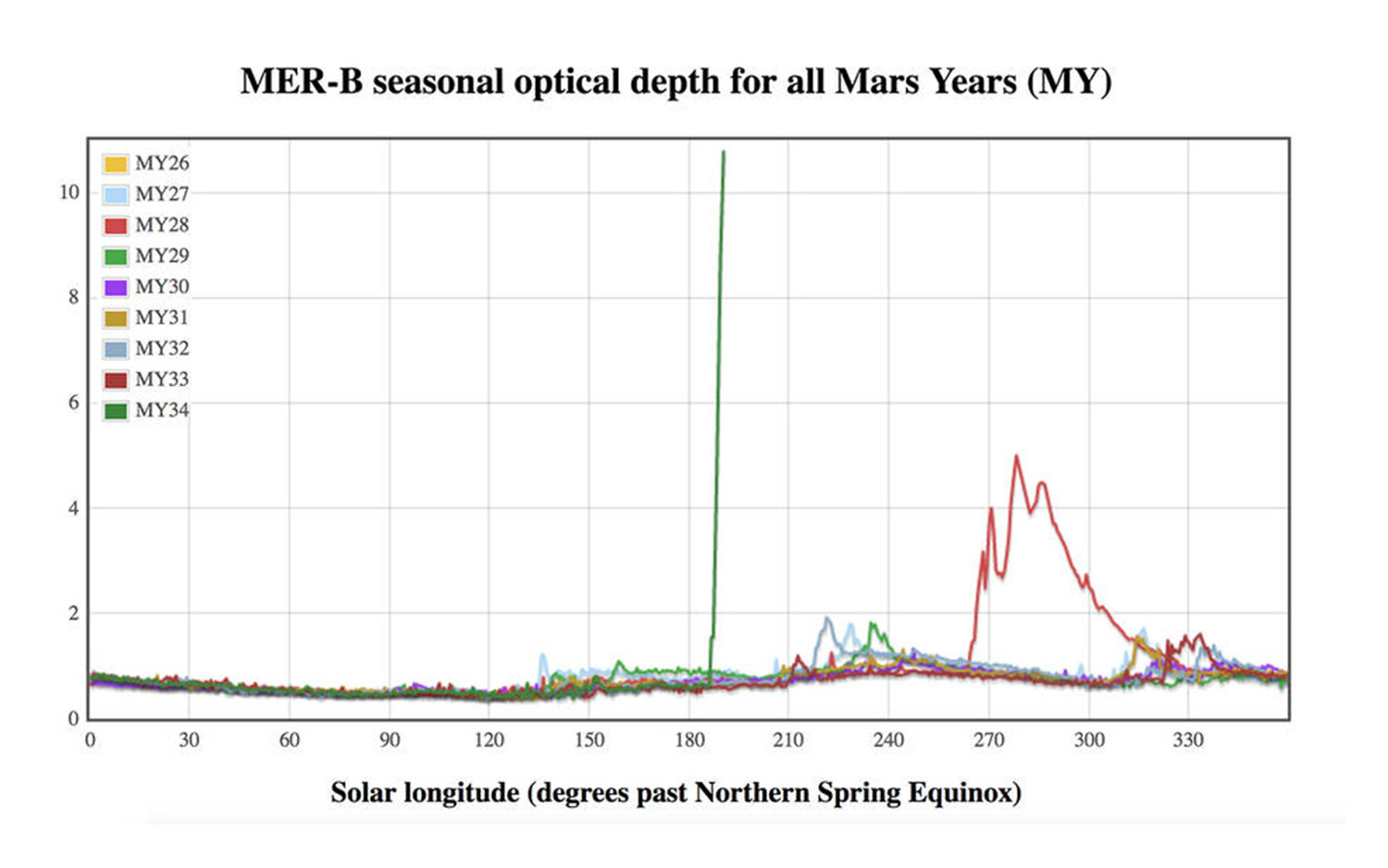 Piqueux et al (2015)'s Enumeration of Mars years and seasons since the beginning of telescopic exploration (found in the Planetary Society's Mars' Calendar) shows that Martian Year 33 (MY33) stared on 2015-06-18 on Earth.

Are launch windows to Mars avoided if they result in landings during dust storm season?

It's pretty well known that the gusts of wind on Mars are relatively harmless to a person standing on Mars (one of the big things the movie The Martian got wrong). Even though winds on Mars could reach up to 130 km/h, the atmosphere is very thin and thus does not result in a huge amount of force. However, this is mostly a bad thing for descending spacecraft as it can offset the final landing location.

Here is a wonderful source from the ESA that talks specifically about spacecraft descending to the surface during dust storms on Mars. This source specifically talks about the ExoMars Schiaparelli lander in 2016.

Once it was decided to launch ExoMars toward the Red Planet during the 2016 launch window, the laws of physics determined that the spacecraft would arrive at Mars in October, during the northern autumn – usually a period of significant dust storm activity.

The direct answer to your question, Are launch windows to Mars avoided if they result in landings during dust storm season? is ultimately no because the Schiaparelli lander attempted a landing in October even though there was a significant risk of a dust storm during landing. There is also the added benefit of more science and a better understanding of the Martian atmosphere by attempting to land during a dust storm, and gather data about the atmosphere during the descent.

However, the ESA did think of putting the spacecraft into orbit before they released Schiaparelli.

"We considered going into Martian orbit before Schiaparelli was released, but we eventually decided to save fuel and mass by choosing to release it from a hyperbolic arrival trajectory for a ballistic entry,"

Slight modifications had to be done as a result from the dust.

One problem we looked at was erosion of the thermal protection material on the front heat shield, due to high speed impacts by dust particles during the entry phase. Dedicated wind tunnel tests with a dust-loaded flow allowed us to derive a dust erosion model that we used when we designed the heat shield. As a result, we increased the thickness of the ablative thermal protection material by 3 to 4 mm.

Any dust storm would not have seriously damaged any of the other hardware. The parachute was shown to work against the dust, and radio communications were not a concern.

"Studies were made on the parachute materials to ensure that it would not be affected by the dust particles. The simulations verified that the parachute strength is adequate for the predicted changing atmospheric densities. (. . .) After various analyses, the mission team concluded that atmospheric dust would have little effect on Schiaparelli's radio communications, although the altitude and velocity measurements made by the radar during the descent would be slightly affected by a small attenuation of its return signals.

So to summarize: Dust storms are definitely taken into account when planning a Martian landing, but it never cancelled a launch in a once in a two year launch window as seen from the European ExoMars mission.

Not the answer you're looking for? Browse other questions tagged mars landing mission-design weather dust-storm or ask your own question.

41
Why did multiple nations decide to launch Mars projects at exactly the same time?
13
Will Perseverance be captured into Mars orbit before descent or would it be a direct descent into the atmosphere?
14
Opportunity's last tau was 10.8; what does that mean and how is tau defined and measured?
13
Do Mars rovers protect optical windows during dust storms? Do they "avert their eyes" or do they just "grin and bear it"?
4
How long would astronauts' footprints on Mars persist?
5
Why would InSight's arrival date at Mars be fixed, and independent of the launch date?
7
How could the landing date of Perseverance Rover be fixed irrespective of 26 days launch window?
4
Alternative to GPS navigation for vertical landing, especially on other planets
4
Have any systems on any Mars rovers failed (even partially) as a result of a dust storm? (besides loss of solar power)
5
Why are the gaps in MRO global images of mars so irregular and sometimes filled in?
See more linked questions

15
How does the Curiosity rover survive dust storms on Mars?
8
What are the known historic global and regional dust storms on Mars?
20
Curiosity is still dirty! How will the ExoMARS Rover keep its solar panels dust-free and collecting sufficient power?
5
Why are the gaps in MRO global images of mars so irregular and sometimes filled in?
4
Have any systems on any Mars rovers failed (even partially) as a result of a dust storm? (besides loss of solar power)
11
Is there any chance that Opportunity might still recover from the dust storm?
8
Are there methods of lightning detection on Mars?
4
How would Ingenuity handle Martian Storm and dust devils?
4
Why is 90 sols a standard mission duration for robotic spacecraft on the surface of Mars?