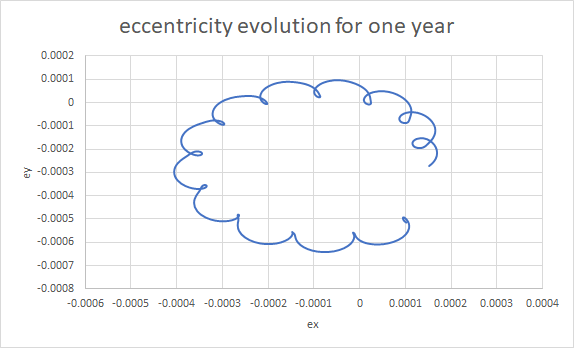 This is relatively straight-forward but the OP needs to determine/find out mission requirements to start with. It looks like a homework problem so I will leave you to fill in some gaps yourself (plus, in retrospect, its not that great an explanation!).

NB assuming the unlabelled plot is that of eccentricity vector then the eccentricity magnitude is simply the distance from the origin to the line. Clearly the magnitude varies from more or less circular (i.e. at the origin) to about 0.0005 or 0.0006 (by eye).

The size of this circle comes from the satellite shape plus any regularly applied control. If the satellite is left uncontrolled this circle's radius is a characteristic of the area to mass ratio and reflectivity. (This isn't any kind of quote, I just wanted to give the whole point more emphasis)

It would help to know whether this previous year has already had eccentricity control or not. Lets assume the last year of progression has occurred with the satellite doing no eccentricity control of its own and that the longitude manoeuvres have been arranged to have no influence on eccentricity (actually rather a contrived situation but hey no). In that case the satellite will continue to do a similar circular pattern each year, with some scope for the big "curly circle" to drift around from year to year. Basically each January it will be at the same point on the circle even though the circle as a whole is mobile.

Have a look at the eccentricity evolution over two or three years in order to see what is typical for a few objects that are either:

a) some controlled geostationary satellites and

b) some uncontrolled geo debris

What is the mission target eccentricity? This will depend upon:

If one were able to reset this pattern so that instead of being lopsided it is a circle centred on 0,0 then its clear it will have a through-year magnitude of 0.00025 or 0.0003. This would already be typical of a controlled commercial communications satellite. You might want it tighter but its ok. This is where it is important to know if that past year was already controlled.

If the previous circle was obtained without manoeuvres and you are happy with the circle radius then you will just need to reset this circle once a year the same way.

If the existing circle was achieved with manoeuvres then without manoeuvres the natural circle will be larger. You will need to regularly constrain the new circle to the radius value you want. You can achieve this the same way as for step 1. Just envisage where you want the circle to be and look up the dates from the old circle so that you can transpose the position around the circle from the old one to the desired one.

Not the answer you're looking for? Browse other questions tagged orbital-maneuver geostationary or ask your own question.

3
How does the “eccentricity-inclination vector separation” technique work for colocated GEO satellites?

9
At which point would two GSO/GEO satellites with similar orbital elements be closest to each other?
8
Which orbital maneuver is currently regarded as the most viable for a human mission to mars?
2
Satellite Remaining Life
5
Determining GEO Orbital Slot from TLE
5
Inclination maneuvers for GEO satellites
2
North-South Satellite Manuever
5
Station Keeping East-West Maneuver
4
Get dates when a satellite has performed maneuver from historical TLE data (python)?