Do exploration spacecraft enter Mars atmosphere against Mars rotation, or on the same direction?

I can't find information on which side of mars do probes usually enter.

I suppose that probes do not enter perpendicular to the surface. They are usually represented as entering somewhat tangentially to the surface, and in the same direction as Mars rotation (that would reduce relative speed).

But I do wonder how it is done in reality.

There is always a benefit to entering a planet's atmosphere with matching rotation.
In the case of Earth, the difference is a rather huge 920m/s effective airspeed between reentering prograde or retrograde.

With Mars the effect is smaller but still strong, at some 485m/s difference.

Even on the Moon it makes a difference, but so small as to be almost ignored. Merely 9m/s. For the Moon, orbital parameters and communication lines greatly outweigh direction of approach.

There is no law that says each probe must take benefit from this effect, and indeed for some probes heading to the polar regions the effect is completely not relevant. But as a rule of thumb, yes. A Mars lander will always enter its atmosphere prograde to planetary rotation.

Space craft will tend to enter orbit counter clockwise as viewed from the northern hemisphere. This is due to the fact that most objects in the solar system orbit and rotate this way with the exceptions of Venus, Uranus and a few asteroids. Moving in the direction of rotation will therefore reduce the required velocity loss where as entering orbit clockwise would increase it.

This is not a definitive rule however, it is entirely possible to enter clockwise if the heat shield is able to withstand the additional velocity loss or even across the poles into a polar orbit with an intermediate velocity change if required and this has advantages from a survey perspective as the entire planet can be viewed from directly above at some point in the orbit.

Answers to What aspects of reentry heating 'scale as the 8th power'? including my unnecessarily downvoted answer there explain that radiative heating from the hot plasma to the spacecraft are an extremely strong function of relative velocity between the spacecraft and the atmosphere, which rotates with the rest of the planet.

A 10% difference in reentry speed could double the radiative heating load on a spacecraft entering Mars' atmosphere ($1.1^8=2.14$).

and the atmosphere's rotational velocity at that altitude is about 241 m/s, so the ratio of radiative heating prograde versus retrograde would be

and that's a big difference!

Radiative heating is a huge problem and so ablative heat shields continuously vaporize, producing a layer of gas which is somewhat opaque to the thermal infrared light radiated by the plasma so that much of it never reaches the spacecraft, but nothing is 100% effective so you'd still like to keep heating to a minimum by entering the atmosphere at the lowest possible relative velocity.

Note that like the Space Shuttle, the SpaceX Starship planned to land on Mars will use ceramic tiles and not an ablative heat shield, so the outside surfaces of the tiles will be directly exposed to full radiative heating.

The tiles will (hopefully) have high reflectivity for thermal infrared, and low thermal conductivity so that the thermal loading on the ship's structure behind the tiles is low. It will also use aerodynamic fins to somewhat reduce its rate of descent so that it can dump more velocity before reaching denser parts of the atmosphere.

Still, with no ablative heat shield to block radiative heating, it will certainly benefit from the reduced relative velocity of entering with Mars' atmosphere's rotation rather than against it. 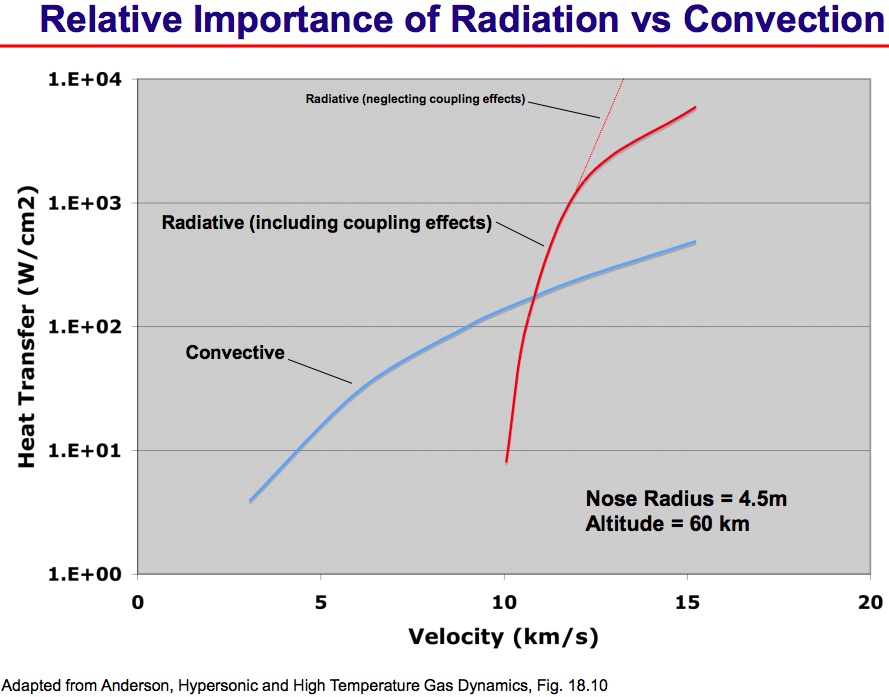 16
What aspects of reentry heating 'scale as the 8th power'?
10
When things land on Mars what fraction of their velocity do they remove propulsively?
8
Difference in atmospheric entry for Earth and Mars
6
How much does the rotation of the Earth affect re-entry and could we go against it?
4
Has there ever been an attempt or serious consideration for spacecraft to land on Mars without an ablative-type heat shield?

11
Theoretical: How might we land on a planet/moon that has an orbit going in the reverse direction of Earth?
6
After a trans-Mars transfer, what is the direction of the rotation of the orbit around Mars?
5
What does Specific power [W/kg] of a Solar Array exactly mean?
6
Will SpaceX vehicles orbit Mars before they enter the atmosphere?
14
Why were Spirit and Opportunity separate launches?
4
Are there any at least somewhat authoritative estimates of how long it will be before people will land on Mars and setting up camp?
18
If the Earth spun clockwise, how would that affect Space Exploration?
2
History of investigation of lunar and Martian surface gravity
6
Why did Mars Pathfinder have such a high atmospheric entry velocity?