The question in meta Is the mission-design tag description wrong? Should the trajectory-design tag be somehow nixed? needs some attention, so I thought I'd turn to our "panel of experts" here in Space SE to get to the bottom of what the term "mission design" is taken to mean by its various members.

If so, or anything even close, from those contexts what would knowledgeable people infer to be an approximate definition and/or scope of "mission design"? What all is it seen to encompass?

Right now our mission-design tag wiki excerpt is probably under-scoped, and the full Wiki is hard for me to understand, but those are topics to be discussed at the linked meta question. I've placed an answer there as well but I'm no expert in the field so I'm grasping as straws.

Yes, there are people whose sole job is "mission design." They design the trajectory that a spacecraft should follow to fulfill its mission and all of the maneuvers needed for that to happen. Some companies specialize in mission design consulting, like Space Exploration Engineering, Advanced Space LLC, or the X Team from JPL (although the latter are purely on a short-term consulting and advising role).

Typically, the mission designers will work with the initial funders of a mission to understand the end-goal of the mission (e.g. "fly over this part of the Earth every 3 days" or "orbit Mars such that we can map it with this precision within these latitude ranges"). From there, they'll work out what is the most appropriate final orbit the spacecraft should be in.

Then, they find the set of transfer orbits which lead to that final mission orbit (also called the station orbit). This involves placement of the maneuvers throughout the transfer trajectory. This leads to a "delta-v" budget, which the sum of velocity changes needed to reach the final orbit. This budget is important for the systems engineering team which will use it to scale the thrusters and select the propellant(s) for this mission. If it's a low-thrust mission, then the full design is done with that in mind (the control laws and trajectory optimization is quite different).

Once the thrusters are selected, the manufacturer will provide some thrust firing errors, e.g. "instead of being on for two minutes exactly, this thrust may be on for only 1min58 or up to 2min02." This information is communicated back to the mission designers who will run Monte Carlo analyses to determine the minimum and maximum fuel use to be expected. This may lead to a re-optimization of the trajectory.

There will be several iterations of this design process throughout the building of the mission as the destination orbits are changed (for objective alterations or for regulatory purposes enforced by the International Telecommunications Union).

Once the spacecraft is launched, the navigation team will try to accurately pinpoint of the position of the spacecraft after it has been deployed by the rocket. From that information ("launch errors"), the mission designers will recompute the time and thrust profiles of each burn in order to meet the mission objectives.

For the shuttle program this work was called "flight design". 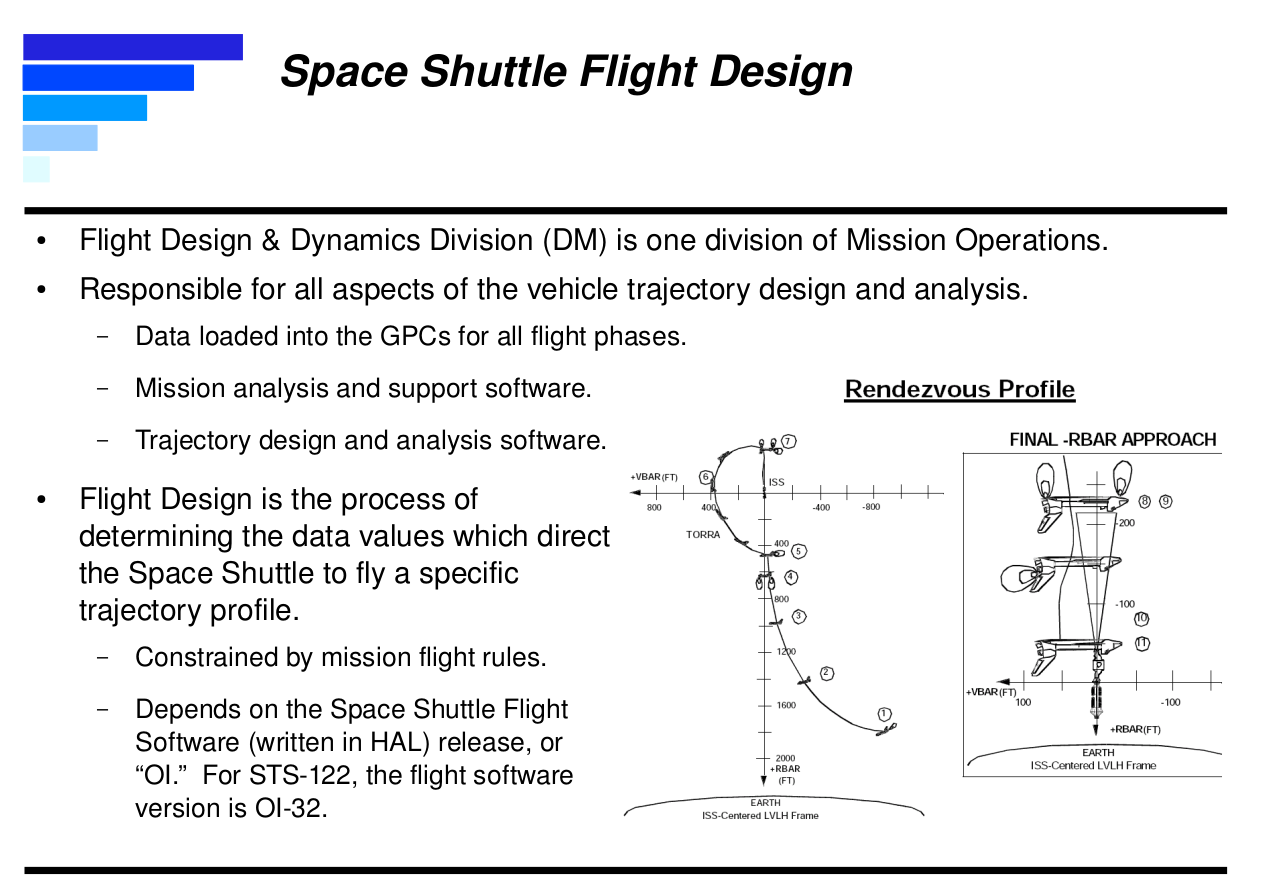 The source presentation contains an excellent overview of the topic.

The answer to all your bulleted questions was "yes" for shuttle as long as you change the word "mission" to "flight". The "handbook" was many volumes.

I think this term varies by organisation. In my expereience it is a multidisciplinary topic.

Whilst a key part of mission analysis is how to get to and around the orbit, as large an effort has to be put into:

Mission analysis and its subsequent design is an activity that involves systems engineers and subsystem engineers as well as astrodynamics and manoeuvre planning.

Mission design can be used for the trajectory designers, working iteratively with various other teams to come up with a feasible mission.

Trajectory design and navigation can also be termed flight dynamics, and then mission design can include flight dynamics but also can be a systems role, helping interface between many teams to design a mission that meets requirements/objectives - science (or whoever is deciding the mission objectives), spacecraft systems, nav, mission and science operations. Each mission/NASA center handles it differently and it depends how the management is structured.

For a Mission Design Handbook, one of the go-to intro books that gives lots of details of all the subsystems that go into mission design is: The New SMAD (Space Mission Analysis and Design). There's also an oldie but goodie called Spacecraft Mission Design by Charles Brown.

13
What is the least energetic trajectory design to send uncrewed supplies to Mars?
12
What is a reference mission?
2
Satellite mission design/performance requirements to attitude/orbit control design specifications
1
What exactly is an F-mission?
20
How well would Max Faget's April 1, 1969 design for the Space Shuttle have actually worked? What would have been the major problems?
1
What is "trade space" in the context of libration orbit mission design? (used in trade analysis, launch window analysis and trade study)