I've included an image depicting how exhaust energy from a rocket launch can be recouped by turning it into a large scale pressure cooker by the use of some kind of platform=sabot (thanks @SolomonsSlow). Could this work? And more importantly, would it save a worthwhile amount of energy/fuel in, e.g., a Falcon 9 launch? 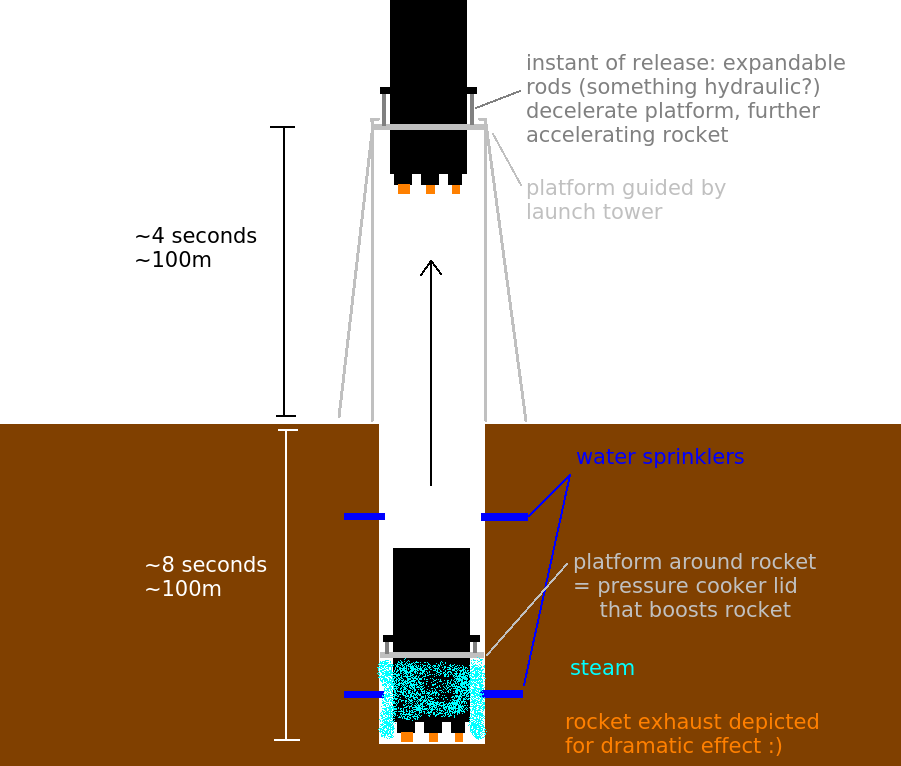 The timings are based on a Falcon 9 starlink launch. I assume engines are not throttled up at launch, but since the total burn time of stage 1 is 170s, this might save a ballpark ~3% of fuel, assuming you obtain the same speed after 12s=200m but with the boosters working at a utopian 200% efficiency. Unfortunately, I don't know enough about rocket launches to do a meaningful calculation.

Also, one could easily devise other ways of jump-starting a rocket in a rocket fuel-independent manner (e.g., dump flywheel energy into a railgun-like propulsion mechanism) that further accelerate the rocket. Why aren't people doing this? Are such endeavours simply not efficient enough to pursue?

Your launch method would destroy an unmodified rocket by the heat and pressure of the exhaust. The water sprinklers would reduce the heat a little, but not the pressure.

The effect would be very, very tiny. The rocket has to reach a hight of 400 km and a speed of 8 km/s. If 100 m height is done in 8 seconds, the mean speed is only 12.5 m/s, a little more than a thousandth of the needed 8000 m/s. A thousandth of speed is equivalent to a millionth of energy.

It is like trying to speed up a race car (with running engine) by push-start for the very first meters.

would it save a worthwhile amount of energy/fuel in, e.g., a Falcon 9 launch?

As it stands? no. You'd need a whole new first stage capable of surviving the heat and pressure of launch (hands up now, who likes the idea of flame-grilled tanks of liquid and possibly rather cold rocket fuel?) as well as engines that can operate efficiently in a very hot and high pressure environment.

More importantly, you'd need to build a whole new set of launch facilities, cobble together some prototypes, blow a bunch of them up, get some working, then sell launch capacity at a discount to encourage people to use your unproven and risky new launcher, etc.

In that regard, whether or not it saves a few percent of fuel is rather counterbalanced by the enormous up-front cost and risk. It isn't a great trade-off.

Also, one could easily devise other ways of jump-starting a rocket in a rocket fuel-independent manner (e.g., dump flywheel energy into a railgun-like propulsion mechanism) that further accelerate the rocket. Why aren't people doing this? Are such endeavours simply not efficient enough to pursue?

There are already air-launched rockets of various colours and flavours... the first one that comes to mind that's used to put actual useful payloads into orbit is the Pegasus. There are more famous suborbital things like SpaceShipOne, of course, and also the likes of the ASM-135 anti-satellite missile, which was never used.

Ground-based launch assist systems seem to be perpetually academic exercises, but maybe one day we'll get some kind of maglev first stage. The MagLifter idea popped up in 1994. Non-maglev test tracks also exist.

For something that is a little bit like what you're thinking of though, you can look for a popular but fortunately little used style of rocket: the submarine launched ballistic missile.

To quote from the Titan II launch process described here:

TRIDENT missiles are launched from the submarine by a steam generator system. A small, fixed solid-grain gas generator is ignited and its exhaust directed through cooling water into the base of the launch tube. The missile is ejected from the tube, through the water, and to the surface. At that point, the missile's first-stage rocket motor ignites and sends the missile on its way

Note that the gas generator isn't part of the rocket itself; that saves a bit of mass and additional staging complexity.

Not the answer you're looking for? Browse other questions tagged launch propulsion design-alternative launch-site launch-system or ask your own question.

9
What benefits can be gained from launching below ground?
3
Why aren't rockets launched in movement?
3
Why don't silo-launched Minuteman missiles incinerate themselves at launch?