Why did NASA intentionally crash-land the Curiosity and Perseverance sky cranes on Mars?

The sky cranes for both the Curiosity and Perseverance landing systems were both intentionally crashed into Mars. According to this answer regarding intentional crash-landing of spacecraft in general, several reasons are postulated, such as that this is to avoid a landing, which would damage the Martian surface (but this is exactly what the Curiosity's sky crane did in this image of the crash site and debris field). Is there a source that would explain the specific rationale for intentionally crash-landing the sky cranes?

tl;dr: With technology, anything can potentially go wrong at any moment. Simplify and minimize wherever possible. Keep your eye on the prize.

As soon as the "cord is cut" the crane represents an imminent threat to the \$2.75 billion rover in several ways. It's hydrazine monopropellant engines have hot, nasty, reactive, horrible exhaust due to incomplete combustion components traveling at high velocity could burn, damage and contaminate the rover and its science packages, putting the entire mission at risk.

It could even collide with the rover.

To minimize risk to the mission, as soon as the cord is cut it is essential to put as much distance between the two as possible as quickly as possible. Since the rover can not "run away!" the sky crane must do it. Any delay would be irresponsible.

But why crash? Why not land gently?

The amount of propellant that would remain after the rover was released was unpredictable, there may have been terrain awareness very late in the landing, and as fuel goes low an engine might cut out at any moment.

So maximum "run away!" acceleration is used so make best use of whatever remaining propellant there might be and no matter how soon it runs out or worse still; some engines cut out, others don't, and the craft is now an uncontrolled flaming chemical projectile.

From this high ground-speed escape trajectory (that landed 400 meters away) a soft landing will be a lot more difficult. Chances are low and... for what reason? After all the landers and rovers that have scoured mars for decades, what is it exactly that this flaming high-velocity exhaust-spitting monster is going to contribute to science??

Instead, the plan was to keep it simple.

With technology, anything can potentially go wrong at any moment. Simplify and minimize wherever possible. Keep your eye on the prize. All's well that ends well, etc.

How did Curiosity turn out?

After 3,000 days on Mars traveling over 24,000 meters and taking tens of thousands of images, countless laser zappings and rock drillings, nobody wonders what the sky crane could have added. From this answer to Where does MSL end and Curiosity begin?: 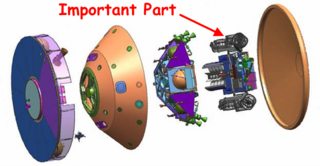 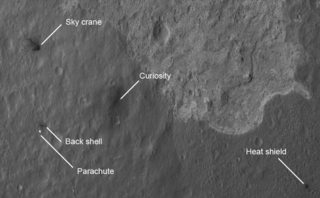 The novel solution the MSL team has developed is what they refer to as a “sky crane.” After reducing its speed through a combination of atmospheric friction, parachute, and retrorockets, a descent stage with Curiosity hanging from it in a bridle of nylon tethers will use its thrusters to essentially hover as it lowers the rover to the surface— “a way of landing without landing,” in the words of Steven Sell, who is responsible for verification of the EDL system. After touchdown, the bridle will be cut and a 6-second burn will ensure the descent stage crashes some 400 meters away. (NASA)

“Landing without landing” is the key word here. A large part of the Sky Crane’s purpose is to prevent damage to the Martian surface, which airbags/retroboosters would inevitably cause. Once it lands the rover, it flies away as far possible before running out of fuel and crashing. Attempting to land the crane or weighing it down with additional instruments would make this far more difficult, and potentially jeopardize the actual mission, i.e. the rover.

I presume NASA just wants to focus on the rover; give it as perfect a landing and exploration environment as possible. Adding to the Sky Crane honestly wouldn’t be of much scientific help to justify the risk and additional cost it would require.

What was going to on Mars was only the rover, all the remaining parts were "support garbage" to be disposed. Sycrane/descent stage does not even have a flight computer: it was driven by rover brain! After umbilical cut, a very simple logic onboard DS was activated: "fly up for some seconds, then turn." Engine is not even controlled, it just burns and burns until fuel finishes.

You can find a first hint into NAIF SPICE kernels of type "FK", the ones describing the reference frames: both for MSL and MARS2020 they use the rover as a reference for all other "pieces":

NASA use "ASCII arts" in FK spice kernels, I translated it in something more modern.

Noe: there are two frames for rover: one for cruise/landing (M2020_ROVER), one for roving over surface (M2020_ROVER_MECH). 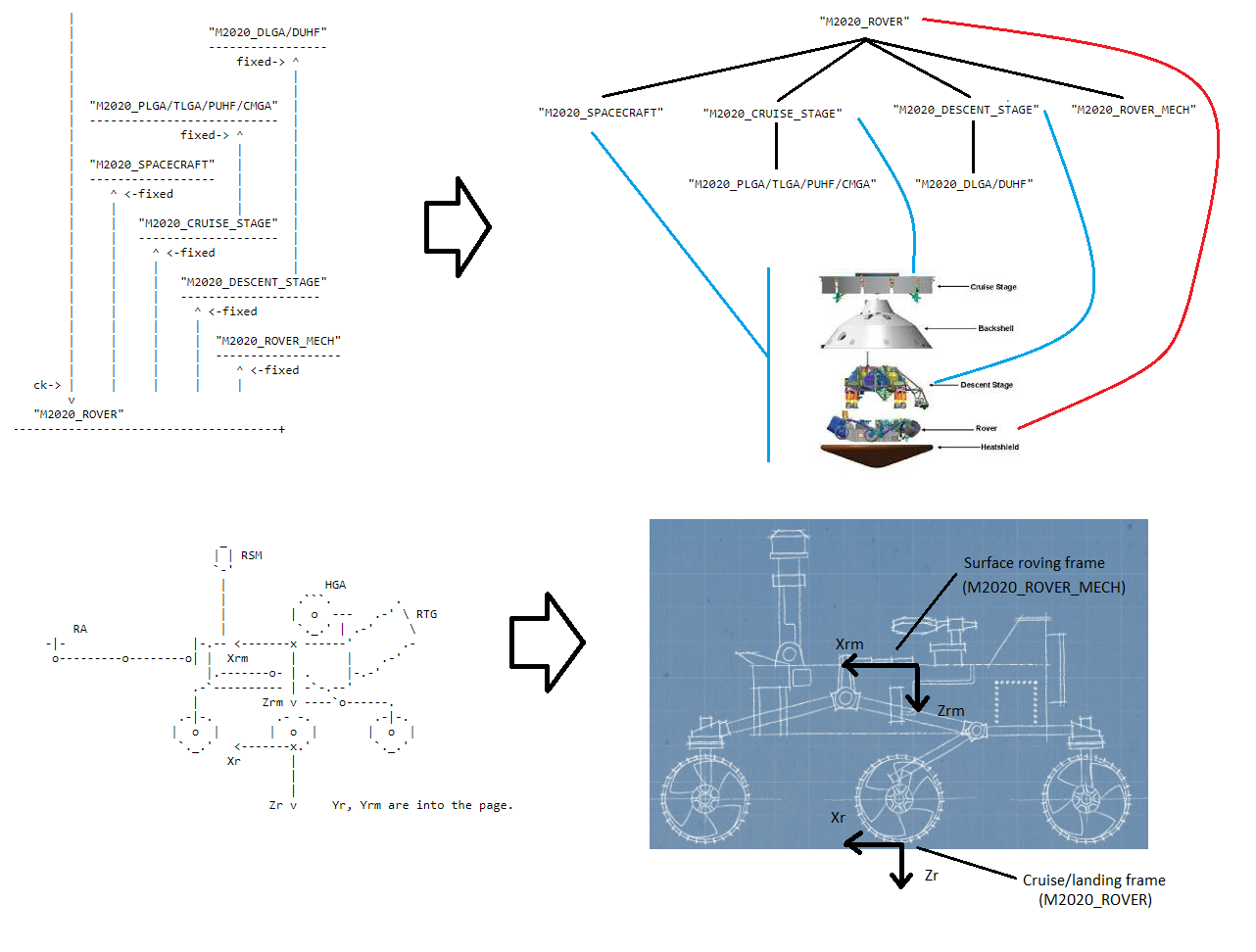 But the real key to understand is this diagram (source): 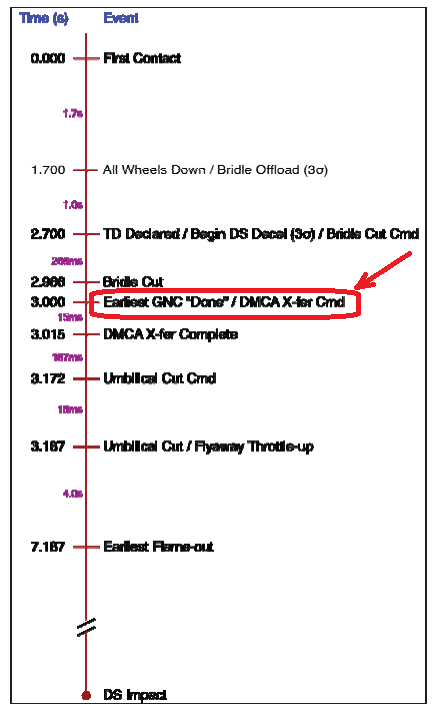 A few milliseconds after bridles are cut, GNC ends its operations, because rover has definitely landed, hence GNC has "done" (its job): it's now time to transfer ("X-fer") descent stage control from rover to descent stage itself (DMCA).

Once touchdown is declared, the DS [=Descent Stage = Skycrane] halts vertical motion and the triple bridles are cut. The BUD [Bridle Umbilical Device] has built-in retraction springs to retract the now free bridles away from the Rover top deck. At this point, control is transferred to the Flyaway Controller on the DS [=DMCA] and the command to cut the umbilical is issued.

Once the flyaway controller on the DS assumes control, it first holds the current altitude for 187 msec to allow sufficient time for the umbilical to be cut. After the requisite hold time, the MLEs [=Mars Lander Engines] throttle up and the DS ascends vertically for a predetermined amount of time. Then, the DS begins to execute a turn to approximately 45° pitch. The DS holds this attitude with the MLEs at 100% until the fuel depletes. The hold, ascent, and turn take place within 2 seconds, and the remaining time is variable depending on the amount of fuel remaining. The DS will then ballistically fall to the surface at a distance of at least 150 m from the Rover.

Note: the umbilical is not cut immediately together with bridles, because it is used, after rover commands bridles cut, to transfer control to skycrane.

Note: in MARS2020, unlike MSL, the umbilical is not "cut" but ripped off by skycrane while ascending.

Not the answer you're looking for? Browse other questions tagged mars curiosity perseverance landing-gear skycrane or ask your own question.

24
What problems led to the use of the Sky Crane system used by Curiosity?
13
Did the Curiosity and Perseverance rover brains do the driving from Earth to Mars?
7
Why didn't NASA use the "Sky Crane" method for landing the InSight mission on Mars?
7
What were the Curiosity sky-crane’s descent engines?
5
Curiosity's powered descent stage test
6
What propulsion system would not pollute the surface when landing on a pristine celestial body?
3
Where does MSL end and Curiosity begin?
0
Could the flyaway of the Curiosity/Perseverance skycrane be aimed in a particular direction?
2
Did the Mars 2020 Mission do any science that wasn't done by Perseverance proper?