Why did MRO have to "both pitch upward and roll hard to the left" to point exactly at Perseverance during the entry, descent and landing phase?

The HiRise camera on the Mars Reconnaissance Orbiter snapped a beautiful photo of Perseverance falling through the Martian atmosphere hanging from its parachute.

This photo can be found here on the University of Arizona's HiRISE page.

This answer explains that the HiRise camera is a push broom type; it scans a 1D-like sensor across a long swath of Mars, like older photocopy machines and fax machines. I suppose this means it couldn't shoot a sequence of shots.

HiRISE was approximately 435 miles (700 kilometers) from Perseverance and traveling at about 6750 mile per hour (3 kilometers per second) at the time the image was taken. The extreme distance and high speeds of the two spacecraft were challenging conditions that required precise timing and for Mars Reconnaissance Orbiter to both pitch upward and roll hard to the left so that Perseverance was viewable by HiRISE at just the right moment.

Question: Why exactly did MRO have to "both pitch upward and roll hard to the left" to point exactly at Perseverance during the entry, descent and landing phase? What does that even mean?

Since the target object is tall and skinny, did it somehow have to maneuver to "pushbroom" horizontally so that the scan was across their short direction rather than bottom-to-top? 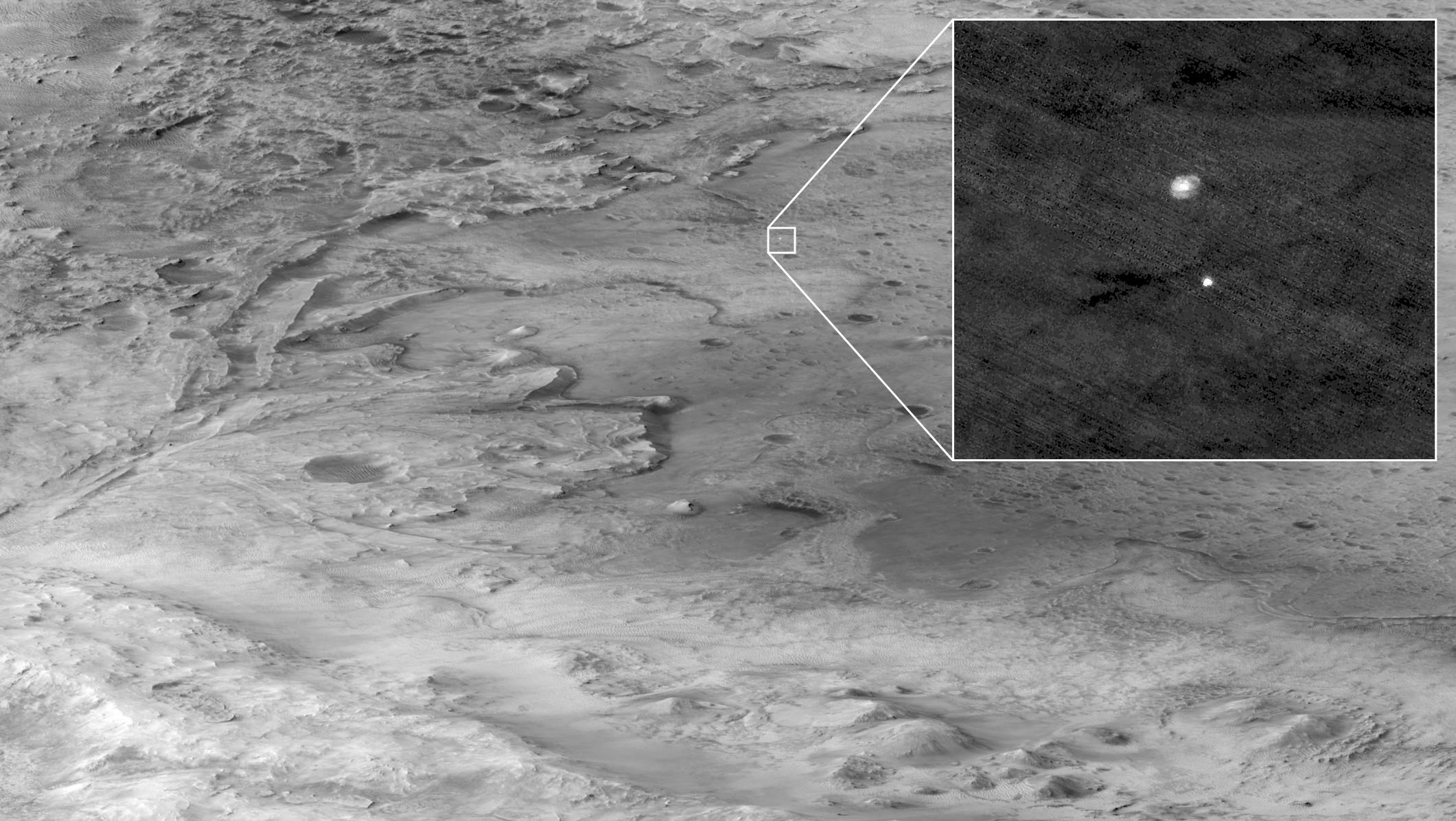 Why exactly did MRO have to "both pitch upward and roll hard to the left" to point exactly at Perseverance during the entry, descent and landing phase?

Perseverance was not directly underneath MRO at the time the images were taken. Perseverence was instead forward of and to the left of MRO's ground track. The fairly standard meaning of yaw, pitch, and roll for an orbiting spacecraft are

Yaw is the last thing one wants to do with a nominally down-looking push broom camera. Think of sweeping the leaves from your sidewalk with a push broom. Yaw (in spacecraft convention) is the equivalent of turning the broom sideways. Instead of sweeping a half meter swath of the sidewalk you're sweeping a swatch that's a few centimeters wide.

The HiRISE instrument has a very narrow field of view. This is where roll becomes important. If the camera is to see some object (dynamic or static) that is not directly underneath the satellite's path, the satellite will have to roll to bring that object into the camera's field of view.

A year plus later and with the enormous benefit of reconstructed data (SPICE kernels), the exact maneuvers of the spacecraft can be visualized.

The high gain antenna (HGA) must maintain Earth pointing as for Mars 2020 (unlike MSL) MRO is the "primary telecom link from atmospheric entry to rover landing" [1]. MRO & MAVEN are the primary links, but MRO achieves near real-time transmission in a "pseudo bent pipe" mode. MAVEN records open loop and relays back to Earth sometime later.

MRO's nominal attitude & spacecraft fixed reference frame is +X in direction of flight, +Z "down" (also the view direction for HiRISE), +Y completes the right hand cross product. The HiRISE CCDs scan in the X direction. This is taken from MRO's latest frames kernel (fk) & HiRISE instrument kernel (ik). Here is an animation I cooked up showing this nominal attitude just prior to Mars 2020's EDL:

It's tough to see the blue +Z line as it essentially overlaps the grey nadir line in MRO's nominal attitude. Both the solar arrays and the HGA on MRO have an inner and outer gimbal to maintain their own pointing (towards the Sun & Earth) distinct from the spacecraft bus attitude. These gimbals mean that any "off-nominal" MRO orientation during the EDL event is (almost certainly) solely for the purpose of taking the picture (including any potential momentum management schemes before/after the picture).

Contrary to at least my assumptions, MRO is out of nominal attitude for nearly half of its orbit and orienting for the HiRISE observation takes several minutes:

Here are two plots of the orientation angles during the sequence: 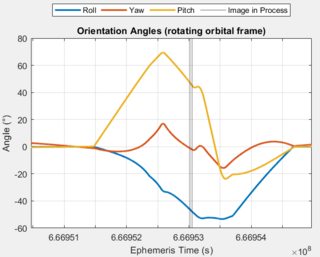 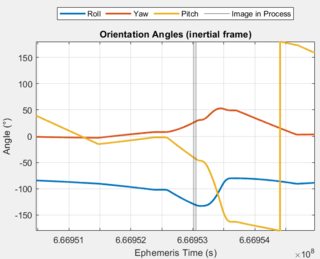 In the rotating frame, left, the nominal attitude is seen as yaw, pitch, roll angles of ~0. We see MRO pitch up, roll left (negative roll), and yaw right (positive yaw). The spacecraft "over pitches" and actually pitches down during imaging, though still "up" from nominal attitude. During the imaging, the spacecraft brings the yaw angle back to near zero, as @DavidHammen explains is important.

I will point out though that Mars 2020 is actually ahead and to the right of MRO when the image is taken as seen in this wider view animation:

The prior plots show some motion during the imaging, which can be seen in the image itself. These artifacts of the spacecraft's maneuvering in the full image can be seen at the start (bottom) of the image:

See the "squiggliness" on the right edge.

Interestingly, the Perseverance rover (and descent stage) are almost not in the zoomed in image. In the full size image (18048 px by 62300 px!), the backshell and parachute are located at ~64% of the vertical (scan/pushbroom) dimension. This means that the backshell and parachute are "imaged" approximately 64% of the way through the observation timewise. When Mars 2020's inertial velocity is plotted over the observation period: 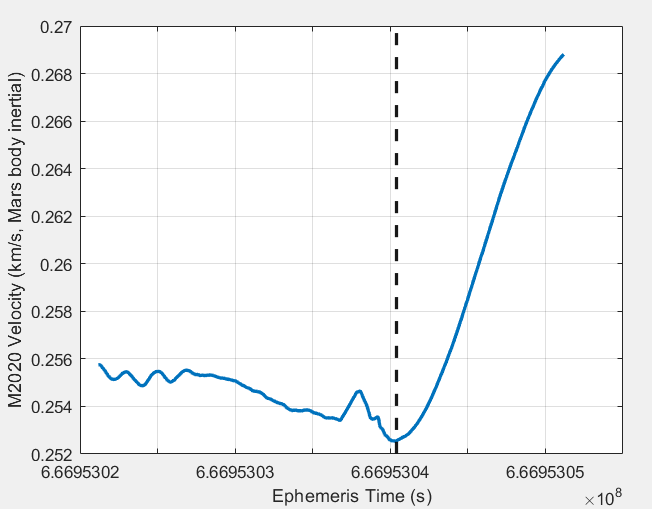 We see that the vehicle is imaged almost exactly when the descent stage and rover separate from the backshell (see the smooth increase in velocity).

Though it would be cool to see a free flying Perseverance, I can't see anything that looks like a descent stage in the full resolution image: 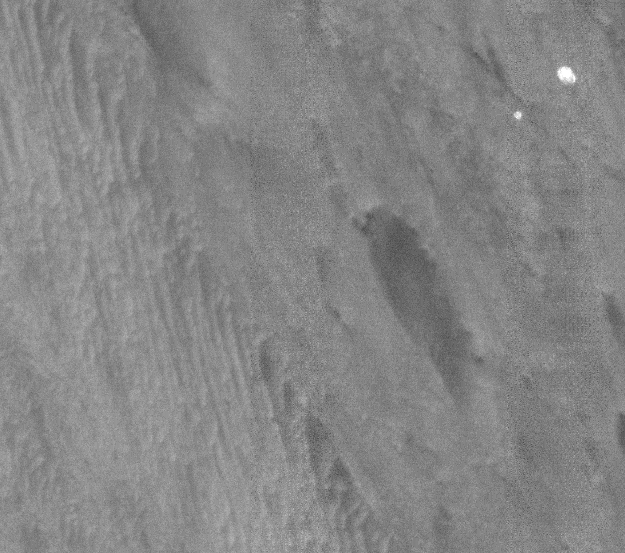 27
Why won't NASA show any computer screens?
15
Is the "Mars blue dune" actually blue? And what makes it so?
3
Can HiRISE see Perseverance?
3
New to GMAT. Where do I start to build an orrery?