Why did multiple nations decide to launch Mars projects at exactly the same time?

There seem to be multiple Mars projects all happening at around the same time:

No. The Laws of Physics and the random fluctuations that created our solar system simply work out that way that every ~26 months Earth and Mars in just the right relative positions in their orbits that it costs the least propellant to reach Mars.

There is a single point in time where it is optimal to launch. The more you deviate from this point in time, either by launching earlier or by launching later, the more propellant you waste and the less useful payload mass to Mars you have.

In practical terms, it turns out that there is a window of a few weeks every 26 months where our most powerful, most expensive rockets have barely enough power to send a useful payload mass to Mars. (Don't forget: the Perseverance rover alone is the size of an SUV and weighs over a ton!) In fact, Mars 2020 was delayed by a couple of days, and they actually had to change the launch profile a bit to be able to make it.

Since the first and correct answer blames it on unnamed "laws of Physics", I'll try to name some names:

Nicolaus Copernicus, Isaac Newton, Johannes Kepler and the like give us basics for orbital mechanics and the nature of the solar system: Earth and Mars roughly orbit the Sun in roughly coplanar roughly circular orbits.

Walter Hohmann "was influenced in part by the German science fiction author Kurd Lasswitz and his 1897 book Two Planets" and gave us the Hohmann transfer orbit which for situations like Earth-to-Mars-like transfers is an elliptical orbit touching Earth's orbit at its perihelion (closest pass to the sun) and Mars' orbit at its aphelion (farthest pass from the Sun). 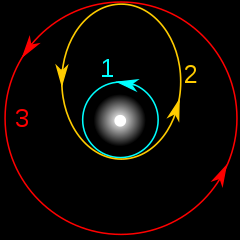 But Earth and Mars have to be there at those times!

So timing is important.

For two periodic functions like the motion of two circular Kelperian oribts with periods $T_<$ and $T_>$ (indicates the shorter and longer periods) and assuming they orbit in the same direction, the period that they line up in some configuration with respect to each other but ignoring the stars is called the Synodic period

note: Every synodic period the planets relationship to each other repeats, but if you were to plot their positions on paper, the Hohmann transfer points would be in different places, they'd move by 0.14 of a complete circle from one to the next.

The other answers have already addressed the logistics reasons for why three separate countries had such similarly scheduled missions, but that still leaves the question of why they all chose this transfer window. However, if we check Wikipedia's list of missions to Mars, it looks like there's been a mission or two most transfer windows since the early 90s. In fact, there were even another three missions from separate countries (USA, Russia, and China) as recently as 2011, though two of those failed. So it's probably coincidence, and the increasing level of global technology that lead to this conjunction.

What they said, and an increase in a number of factors:

The Hope, Emirates Mars Mission is a good example that encompasses all of the above points, that also goes beyond nationalism and economics, with it's Arabic name al-Amal, intended to send a "message of optimism to millions of young Arabs".

The projects don't have the same time scales. They didn't all start in the same year, and the small launch windows, spaced at just over two years apart, all combines to make the odds higher, that in any given window, there will likely be one or more probes heading towards mars. In my life-time, most of those windows were not used. Barring a world war or other world economy crippling disaster, over the next few decades, the rate will likely increase.

17
Are launch windows to Mars avoided if they result in landings during dust storm season?
5
Why would InSight's arrival date at Mars be fixed, and independent of the launch date?
7
How could the landing date of Perseverance Rover be fixed irrespective of 26 days launch window?
4
Why is 90 sols a standard mission duration for robotic spacecraft on the surface of Mars?
1
Did/do the current Mars missions coordinate?

7
How could the landing date of Perseverance Rover be fixed irrespective of 26 days launch window?
5
Could Tianwen-1, Hope, or Mars 2020 image one another en route to Mars?
7
How will NASA set Perseverance to enter the atmosphere of Mars at the right location after traveling 7 months in space?
11
Is there independent evidence that China landed a robot on Mars in May 2021?
5
What are these details on (renderings of) the Zhurong rover's wheels?
2
Why is it so cold in the nighttime (-130 C at 25.1 degree North) at the location where the Chinese rover landed on Mars?
6
What's been going on with the Emirates Mars Mission after it got to Mars?
1
At what Mars-time did Perseverance land?