Why first 2 images of Perseverance (rover) are in black and white?

Why first 2 images of Perseverance (rover) are in black and white? 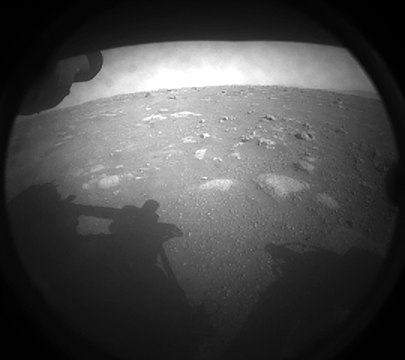 I truly disappointed later I was thrilled after seeing the picture of view of the rover Perseverance from the skycrane during landing.

A color image would need three times the data and transmission time. The time needed for two black and white images is too short for a single color image.

When everything works well after landing and when all status checks are done there is plenty of time for some color images.

Persevance was traveling from Earth to Mars for about six months, a delay of six hours is only less than 0.137 % of the journey.

This might be surprising, but practically all digital camera sensors are monochromatic (black and white). They only measure light intensity (basically, the number of photons that hit each pixel during an exposure), not wavelength at all. How, then, do digital cameras themselves produce color photos? By putting colored filters in front of the sensor pixels and then doing some math. There are two basic approaches:

Put a colored filter in front of the sensor the lens. Take an exposure. Replace the filter with another, of a different color, and take another exposure. Repeat for as many colors as you want. What you have now is several exposures that are still monochrome, but each represents the intensity of a different wavelength range in the original scene! Thus, in an exposure taken through a, say, blue filter, bright bluish parts of the scene would look bright, but even bright red parts would appear dark. Based on that information, you can then reconstruct the original colors of the scene and combine the separate exposures into a final color photo.

To reproduce a scene "as a human would see it", usually three filters are used: red, green, and blue, roughly matching the three types of receptors in the human eye. Each lets through a fairly wide, partially overlapping wavelength range, to maximize information recorded and, again, emulating the human eye. However, in scientific imaging, including astronomy, it is very often the case that you want to use more specialized filters. These are built to pass specific narrower wavelength ranges, including ones in the infrared or ultraviolet region outside human vision, because of what they can tell us about the source of the light, and also to filter out unwanted ambient light that would just make the results noisier.

You can also choose to use a clear filter, that is, no filter at all, when you're not especially interested in colors and monochrome output suffices. This has the advantage that part of the incoming light is not absorbed by a color filter, which is especially useful when you're photographing in very dim light, or very dim celestial objects, and every photon counts.

This approach is used in basically all of the billions of consumer (and even professional) digital cameras that now exist. Because switching filters and taking several exposures is not exactly fast, and requires moving parts, normal digital cameras have only one fixed filter in front of the sensor. But that filter, usually called Bayer filter after its developer, consists of a mosaic of colors in a specific regular pattern, so that each sensor pixel is behind either a red, green, or a blue filter.

Because each pixel only records the value of one color channel, the final color values must then be interpolated based on values of the neighboring pixels. This loss of color (chroma) resolution is typically not a big deal, because to a human eye the resolution of brightness changes (luma) is much more important. However, with a fixed filter array you lose some flexibility and low light capability.

Many digital cameras allow recording so-called RAW images, which, as the name implies, contain raw data directly from the sensor, with no processing applied. In particular, color interpolation is not yet done, so RAW images are monochrome and, if rendered in a non-interpolated form, contain a distinct checkered pattern because each pixel represents the intensity of a different color channel than its neighbors.

So, how does all of this pertain to Perseverance? She, like her predecessor, is equipped with more than a dozen different cameras. The very first photos downlinked were taken by one of the HazCams, a set of four pairs of cameras that in normal operation are used to detect and avoid obstacles while roving. The HazCams of previous rovers were plain monochrome devices, not color-capable at all, because in space simple is better than complex, and not having a color filter simpler than having one.

However, on Perseverance for the first time, the HazCams are actually color imagers, and utilize Method 2, aka a Bayer filter, to take color photos, just like most Earthbound digital cameras. I'm not sure exactly why, but color vision is probably useful for the rover's autonomous navigation software, specifically feature recognition. You can actually see the trademark Bayer pattern in the published raw images taken by Perseverance's HazCams if you zoom in a bit!

And now we're finally getting to your question: Why were the first downlinked images black and white? In Curiosity's case eight years ago, the answer was simple: because its HazCams are not even capable of color. But as we just learned, Perseverance's are! I believe the landing team just programmed the landing software to take some quick'n'dirty photos, with no color processing and a low resolution in order to transmit as quickly as possible and provide a visual confirmation of a successful landing.

A color image would take up a lot of memory and transmission time.

I assume that the engineers wanted to see if everything was fine so they just took a quick pic.

The first two pictures, from the front left and rear right hazard cameras, are intended primarily to give Mission Control an overview of the rover's situation. The science cameras are all still packaged for flight. They'll be uncovered only once it's determined that it's safe to do so.

Not the answer you're looking for? Browse other questions tagged perseverance or ask your own question.