I remember seeing that Voyager 1 is currently in interstellar space and will continue to move indefinitely. I however could not find the reference of where (in the vicinity) Voyager 1 is now. Is it close to some star or is it just traversing empty space and not close to anything?

Voyager 1 and 2 are still in the "neighborhood" of our solar system and very close to our Sun compared to any other star. They are roughly three times farther from the Sun than Neptune and Pluto and so already past the Kuiper belt where New Horizons is currently traveling.

As the diagram below shows, the Voyagers have passed the boundary where the Sun's pushes back on the interstellar plasma, but still much closer than the proposed Oort cloud of objects that are thought to orbit the Sun as left-overs from the solar system formation.

The difference is velocity; slow objects can still orbit the Sun at 100 or 1000 or 10,000 or 100,000 AU as long as they are slow enough to be trapped by its gravity. The Voyagers have more than escape velocity and so will continue to move away indefinitely. See this answer for more about that.

From How well can Voyager 1 separate Earth signals from Solar noise these days?:

Voyager 1: Departed the ecliptic plane right after Saturn going "north", and is shown in magenta going "up, above" the ecliptic.

Voyager 2 After Saturn remained within the ecliptic plane in order to pass by Uranus and Neptune, at which point it "went south1", and is shown in mustard yellow going "down, below" the ecliptic.

Since this is 2021 now you can add a few more millimeters to the ends of the trajectories.

Caution: This is a log scale so each number is a ten times bigger than the last one.

Voyager 1 at 100 AU is in "interstellar space" as far as the Sun's effect, but there are still believed to be primordial stuff orbiting the Sun as far as 10,000 AU and the next stars aren't until about 300,000 AU. 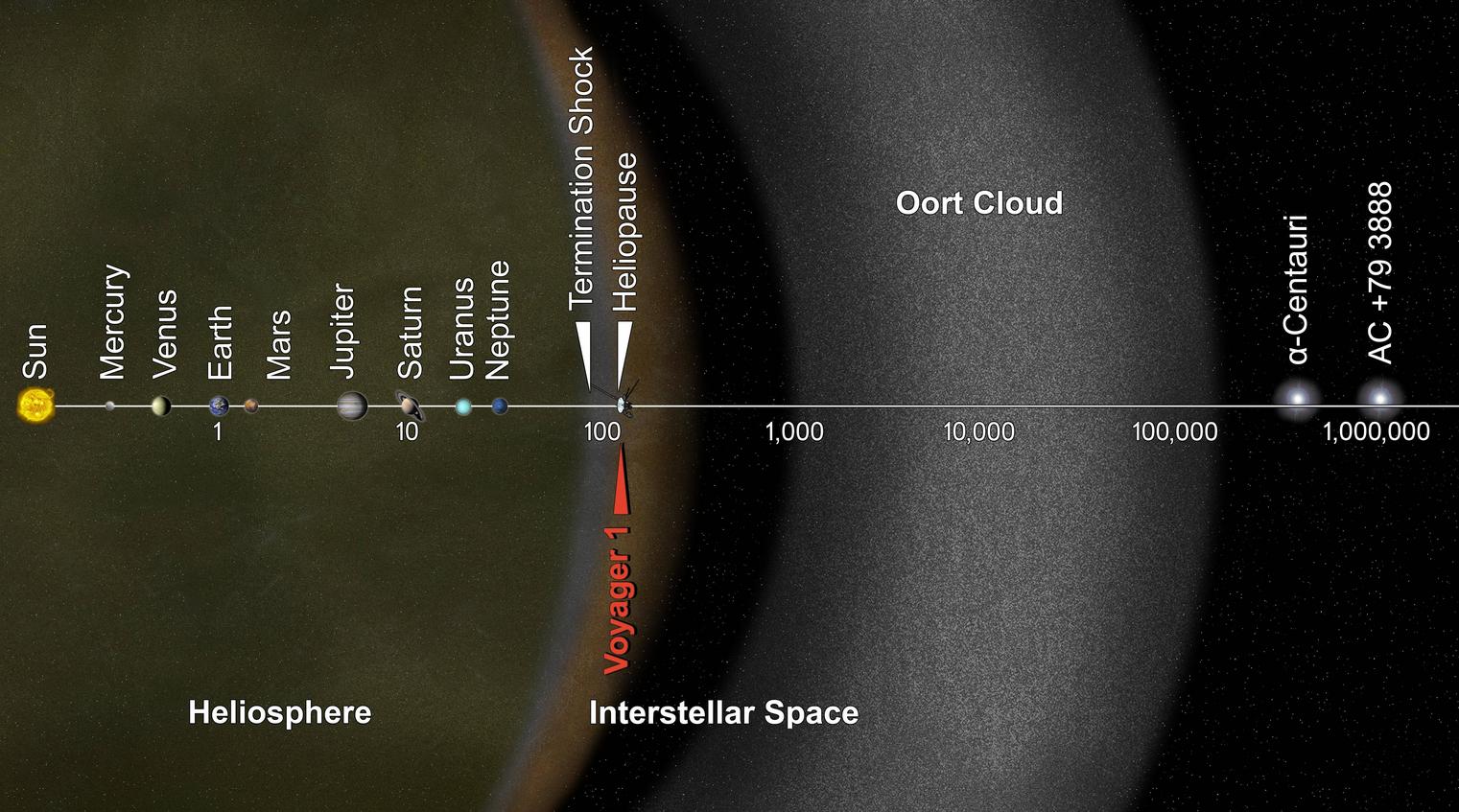 Not the answer you're looking for? Browse other questions tagged interstellar-travel voyager or ask your own question.

29
Could one of the interstellar probes discover Planet IX by accident?
49
Why did Voyager 2 receive a gravitational slowdown (as opposed to a slingshot) at Neptune?
37
Where are Pioneer 10, 11 and the Voyagers ultimately headed?
25
Why did Voyager 2's velocity drop far below escape velocity before the first gravity assist?
24
How well can Voyager 1 separate Earth signals from Solar noise these days?
6
Why is Voyager 1 faster than all other space probes?
12
What is the first non-solar-system object Voyager 1 will run into?
7
What if the Voyagers had remained within the plane of the ecliptic?
3
Could space probe Voyager 1 or 2 reach Alpha Centauri?
2
Did Corporal or other rockets launched from White Sands land in Mexico? If so, how often?
See more linked questions

7
Maybe I can't really reach the speed of light, but how close could I get?
19
Can we use interstellar hydrogen as a fuel for interstellar travel?
1
Why aren't deep-space probes launched from space?
24
How well can Voyager 1 separate Earth signals from Solar noise these days?
22
Can Voyager 1 or 2, theoretically, return to earth if given instructions before their electronic instruments shut down in 2025?
43
Would we be able to detect an extraterrestrial "Voyager" if it came near us?
22
Why was Canberra able to listen to Voyager 2 but not talk to it?
29
Could one of the interstellar probes discover Planet IX by accident?