Could the Soviets have gotten to the moon using multiple Soyuz rockets?

Saturn V's payload was 140 tons, about 20 times that of Soyuz. The Soviets did not have a functioning rocket with similar characteristics. But couldn't they launch 20 Soyuz rockets, assemble the vehicle in orbit from 20 parts and proceed to the moon from there?

To build a translunar stage of around 80 tons from the 7 ton payloads that could be launched on the Soyuz booster would require extensive assembly work to be done by astronauts in orbit, which was beyond the experience of either the US or the USSR in the 1960s.

Before settling on the single large Saturn V and lunar orbit rendezvous, the US contemplated using two or three smaller boosters such as the Saturn C-3 (never built, but intended to put around 45 tons into LEO), which would launch the Apollo spacecraft, a transfer stage, and a tanker into LEO, and fuel the transfer stage in orbit. That would require docking and fuel transfer, but no mechanical assembly.

Assembling a transfer stage from Soyuz-sized (~7 ton) components would be a much more complex undertaking. The USSR's chief designer Korolev did consider it in early 1961, but the launches of the individual components would have to occur in rapid succession in order for the entire complex to be assembled before the components ran out of consumables. This would increase both fixed costs, constructing more launch pads and control centers, and ongoing costs, with multiple concurrent launch campaigns. Furthermore, constructing a large lunar transfer stage from small modules would be less mass-efficient, requiring more structural dead weight -- multiple small fuel tanks would have to be plumbed together, for instance.

Korolev quickly turned to designing the single-launch N1 booster, nearly as powerful as the Saturn V. It managed a few unsuccessful test flights, but fell to budget cuts after the US won the race to the moon.

After 1961, it's clear that the USSR wasn't giving a multiple-launch solution any serious consideration. Assembling a spacecraft in orbit would require extensive extra-vehicular-activity (EVA) work on the part of astronauts, which the US learned was surprisingly difficult during Project Gemini. The USSR did achieve the first spacewalk in 1965 with Voskhod 2, but that was done mainly for show, and they didn't perform another EVA until Soyuz 4 and 5 in 1969. In addition to the first US spacewalk on Gemini IV in 1965, the last four Gemini flights in 1966 (Gemini IX-A, Gemini X, Gemini XI, and Gemini XII) focused on learning how to move and work on spacewalks.

No. The possibility of using the Universal rocket was considered. 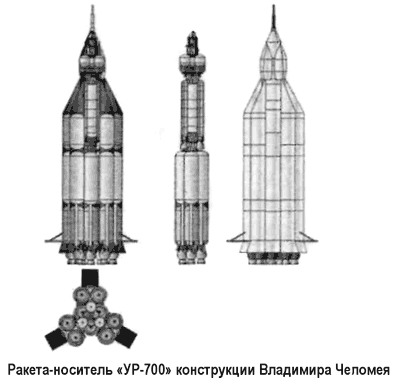 "Could" is very open ended. In-flight refueling is something that NASA has not pursued heretofore (lest it impact other rocket development). It would have to be worked out. Sergei Korolev proposed launching components to be assembled in orbit. Getting everything assembled would also have to be worked out (but seems feasible given Gemini 11). It seems feasible in the sense of physically possible, but keep in mind the internal factor of developing the N-1 rocket (see NASA above) and the external factor of racing with the Americans. Considering this, almost anything might change could to could-not. I think Kerbel space program has been used to demonstrate feasibility.

Not the answer you're looking for? Browse other questions tagged the-moon history saturn-v soyuz-launcher orbital-assembly or ask your own question.

44
Why was Venus rather than Mars targeted for the first interplanetary landings?

14
Why are Soyuz rockets painted with different colors?
13
How much mass could the Saturn V rockets have landed on the Moon if nothing was coming back?
3
What proportion of a space craft soft-landing on the Moon would be payload?
30
Why weren't Saturn V and the Soviet N-1 Moon rockets made larger in order to simplify Lunar missions?
4
Could the Soyuz/Progress supply and crew a space station in Lunar orbit?
18
Was LC39A built with a rocket much larger than the Saturn V in mind?
5
Which existing or near future rockets will be able to get to the Moon?
33
How did the U.S.S.R manage to rotate the N-1 from horizontal to vertical?
4
How many times were things crashed into the Moon “for science” (seismic events)?