Did mission control track Perseverance in real time during its landing?

I have read that the signal that is transmitted from the rover near Mars to Earth could be delayed for over 5-10 minutes.

But NASA's tweet says they are tracking everything in real time. How is this possible? Or are they celebrating it late, i.e. the rover already landed but they cheer 10 minutes later?

No, when the announcer says "touchdown confirmed" and they all cheer the rover has landed a bit under 12 minutes ago.

At that time Mars was about 210,000,000 km away from Earth. Light has a velocity of about 300,000 km/s in a vacuum. So it takes 700 seconds or about 12 minutes to reach Earth. When they talk about "current velocity" they mean "current" as received on Earth, but it's really 12 minutes old. This is why the landing is referred to as Seven Minutes of Terror because atmospheric entry to touchdown takes about seven minutes and there is nothing we can do about it from Earth.

The high definition video you see was received much later, limited by the available bandwidth, and spliced together with the real audio.

"Did mission control track Perseverance in real-time during it's landing?"

No, the landing is performed autonomously using Terrain-Relative Navigation.

The transmission delay from Mars to Earth involves:

That not only makes the path length longer than the distance to Mars but slightly varying too. A fraction of a second is plenty of time to crash, real-time decisions must be made locally.

"In fine matching, up to 150 small patches from each descent image are matched to the fine map. These matches are input as measurements to an Extended Kalman Filter (EKF) that estimates LVS position, velocity, attitude and IMU biases.[1]".
...
"The LVS must operate correctly for all possible EDL conditions. These include vertical velocities between 65 and 115 m/s (Note: 115 * 60 * 60 = 414 km/h) and horizontal velocities up to 70 m/s. Attitude rates can be as high as 50˚/s and off nadir angles up to 45˚. The impact of terrain is bounded by the terrain properties within a coarse landmark footprint of 1500m x 1500m. Within this footprint, the mean slope of a best fit plane can be up to 15˚ and the standard deviation of the elevation residual from this plane (terrain relief) can be as high as 150m.".
...
"... illumination variations will introduce differences between the map image and the descent image that must be dealt with robustly during landmark matching.".
...
"Processing hundreds of landmarks in less than 10 seconds cannot be done on a standard flight processor, so the LVS has a dedicated Vision Compute Element (VCE). The VCE interfaces to both rover compute elements through 1553 interfaces.".

"When the LVS detects it has passed its initialization altitude it begins to send LVS computed state at 8Hz. Just before back shell separation the last valid LVS estimate is used by the EDL/GNC flight software to compute a landing target that avoids hazards and the back shell."

As shown on page 11, there can be many errors both in the testing and qualifications stages and in actual use; a maximum error of 40m is permissible:

As shown in Table 2, the RSS of these LVS error budget contributions is 17.3m compared to a 28.2m allocation. This agrees well with the LVS Field Test results also shown in the table. As LVSS increases in fidelity more error sources will come into play. Given that the allocation and CBE are much less than the 40m requirement, there is plenty of room for the error to grow.". 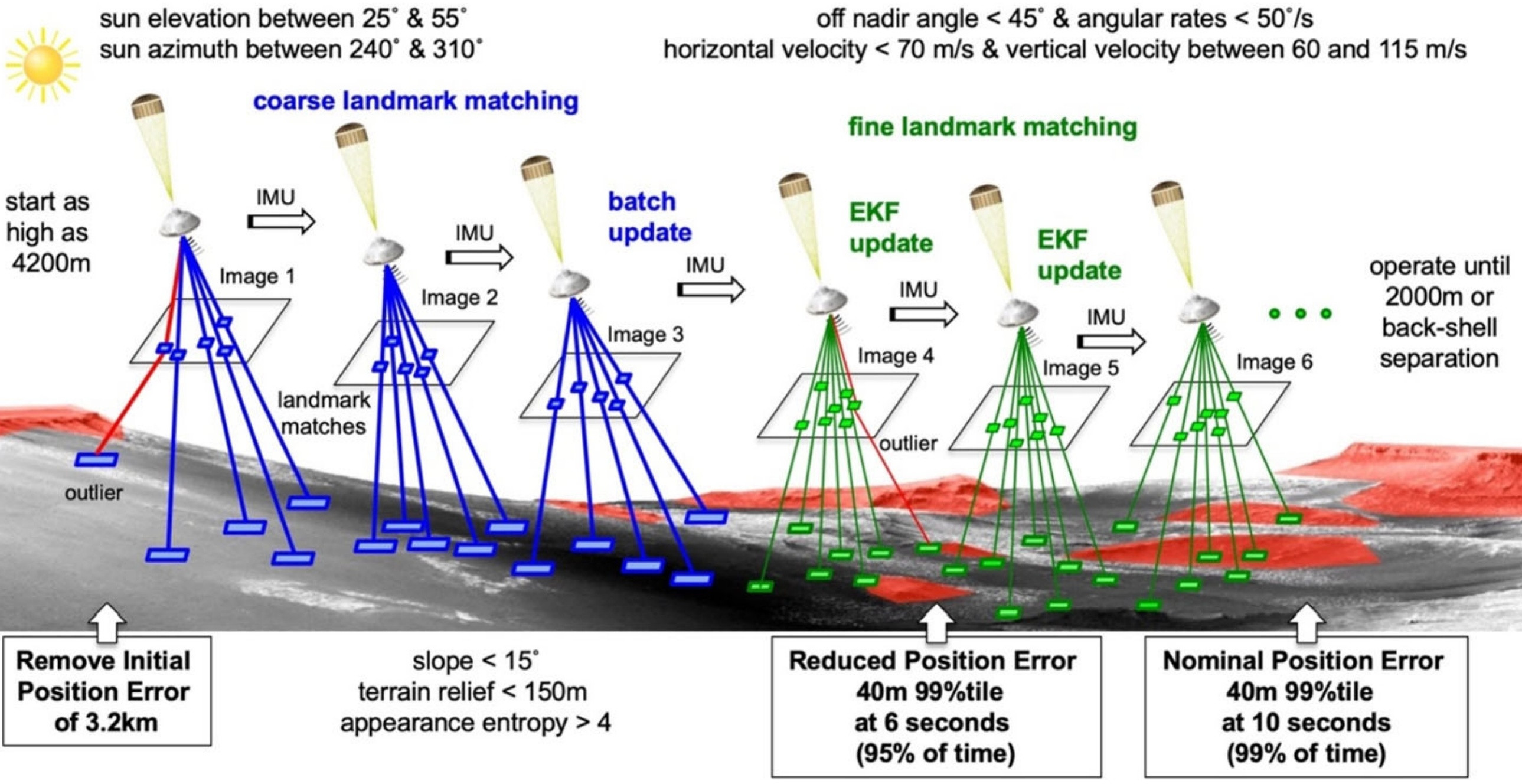 "Fig. 10 LCAM images are used by LVS to match features against a basemap. These feature matches are sent to an Extended Kalman Filter (EKF) that estimates the vehicle position. The vehicle attitude is propagated by an Inertial Measurement Unit (IMU). For details on the LVS see Johnson et al. 2017. Figure from Johnson et al. 2017".

The landing area is compared to previously prepared maps and the exact location is chosen autonomously in real time, by the lander.

Not the answer you're looking for? Browse other questions tagged nasa perseverance or ask your own question.

17
Why do certain times of day have more launches than others?
9
What's the current timeline for NASA's Mars orbiter laser communications?
18
Were all the switches on the Command Module and LM control panels used during a mission?
1
What will the US send to Mars as mentioned in this statement to the press?
2
What is the name of the new NEO searching telescope “heavily based on” NEOCam?
3
How did images taken by Perseverance's landing stage reach Earth despite its crash landing?
3
Why does the Perseverance Rover do sample caching?