How were Perseverance's cables "cut" after touching down?

In the NASA conference today regarding Perseverance's successful landing on Mars, they talked about how you can see the cable that held the rover in this picture below (I circled the cable).

I'm wondering: it looks to me like the cable was cut - if so, how did they cut it? And why would they choose to physically cut the cable rather than using some other mechanism that simply disconnects it (I'm sure they have a good reason, I'm just curious)? 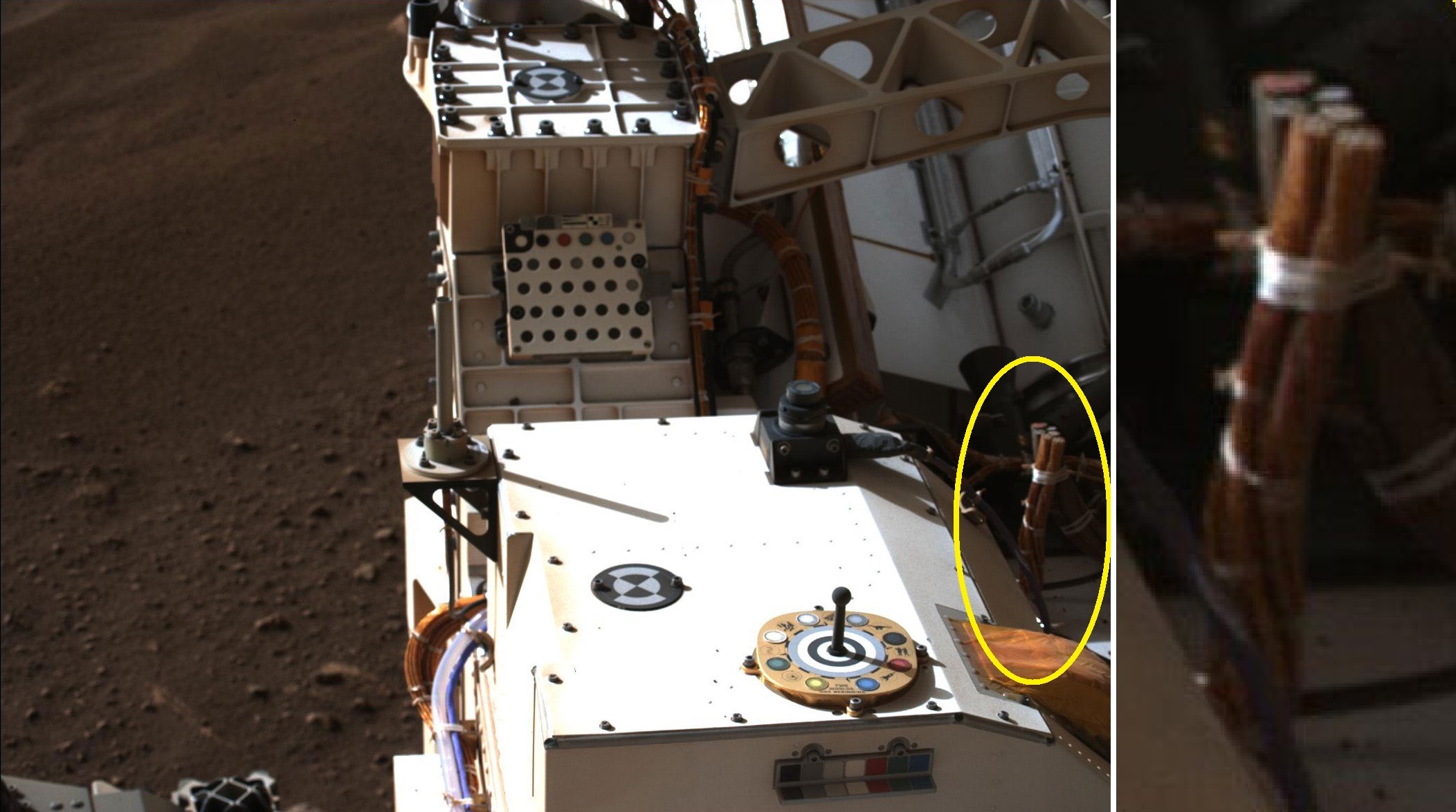 All cables, conductive or otherwise, were severed using pyro-cutters. These devices drive a sharp wedge through a cable using force of a small explosion.

But alas! The bundle of cables in question was actually not cut on touchdown, but during rover/descent stage separation. Cutters that were set off to confirm landing are actually still attached to the rover and will be visible in pictures! 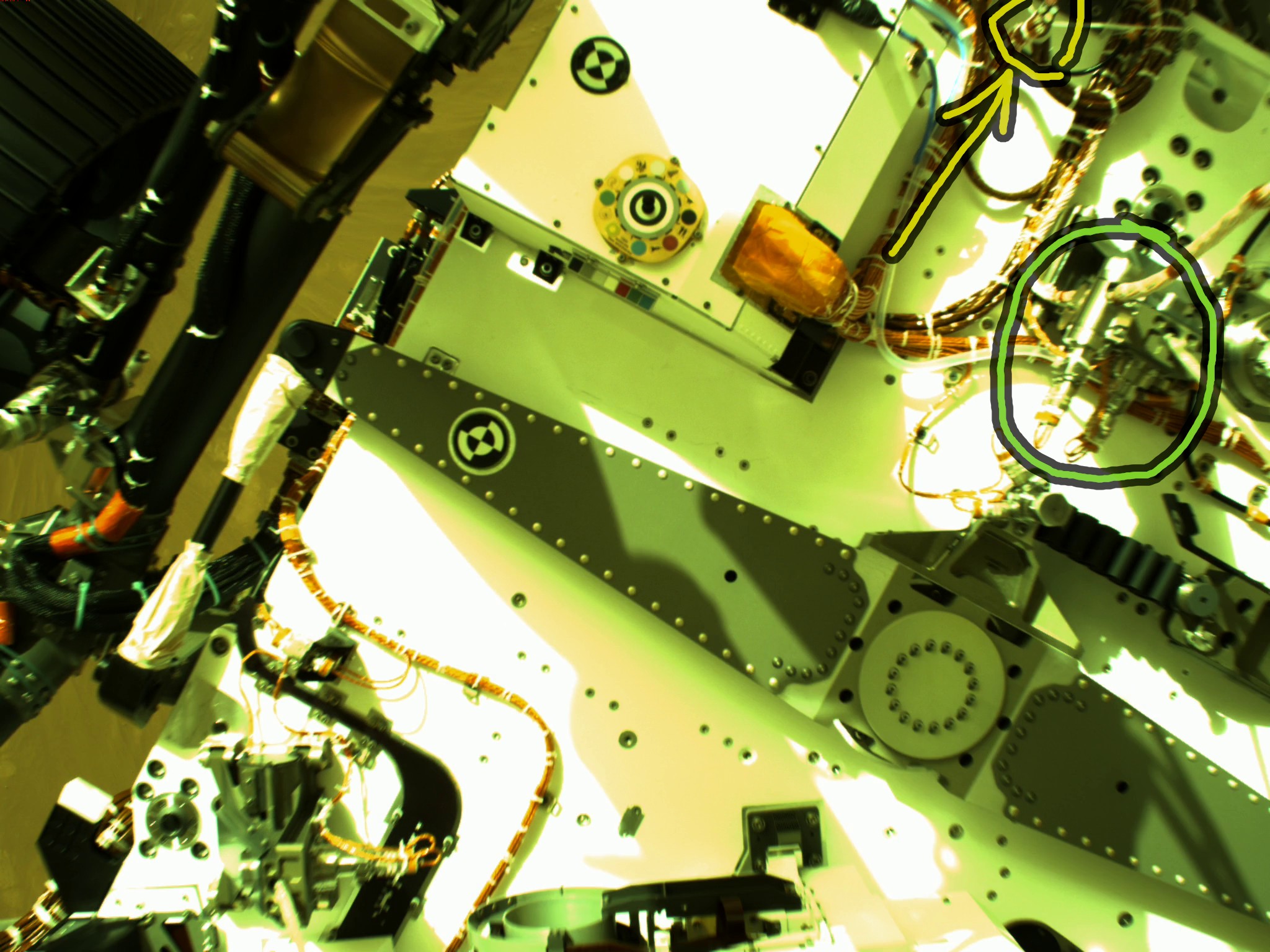 Here we can see the bundle already severed, but the rover is still in the air. Outlined in green is pair of cutters that are yet to fire to sever supporting cable and final data umbilical. 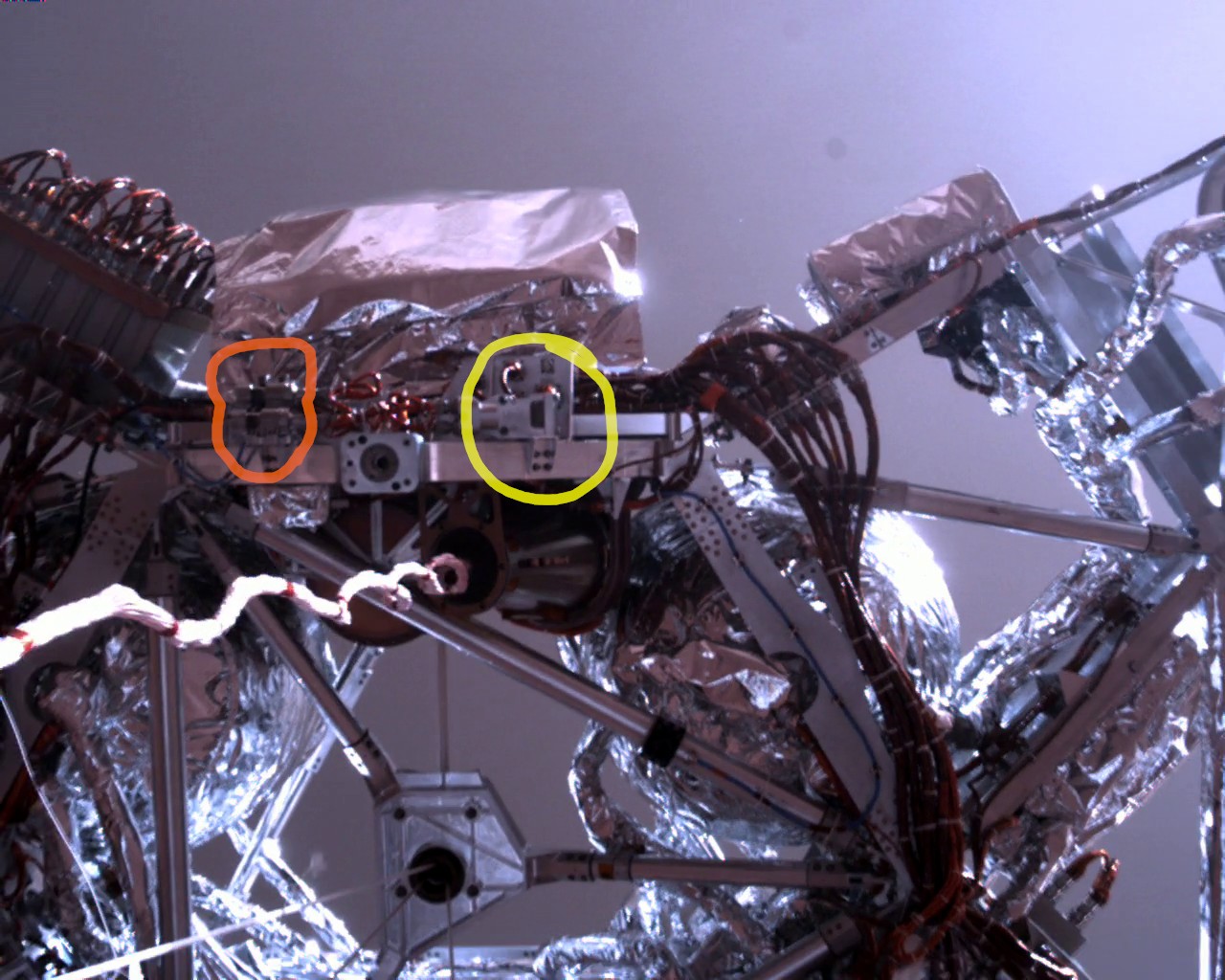 Looking upwards at around the same time we can almost make out the cutters that did the job on this one, outlined in yellow to match. Outlined in orange is another pair of probable cutters. 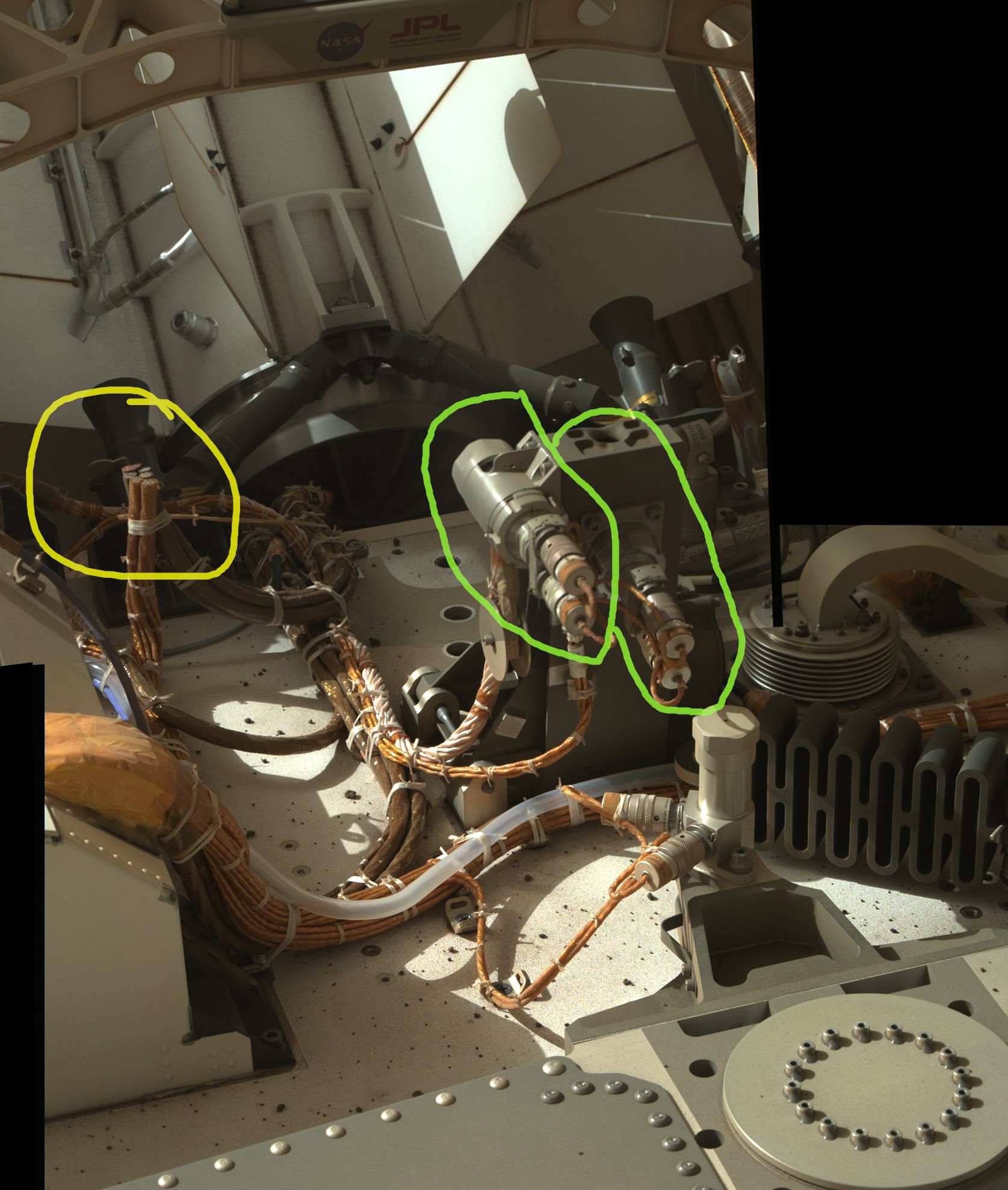 There are also other great closeup pictures of cutters still remaining on Perseverance available through NASA's raw image tool.

I believe the mechanism is this pyro-cutter, photographed by Emily Lakdawalla here. Specifically, I think they were manufactured by PacSci EMC, since they brag about it in this Facebook post. If you'd like to buy one, they sell them here.

There's a description of the cutters used by MSL (Curiosity) here with some nice pictures of it in action on page 12.

According to the official NASA press release, pyrotechnic guillotines were used:

The footage ends with Perseverance’s aluminum wheels making contact with the surface at 1.61 mph (2.6 kilometers per hour), and then pyrotechnically fired blades sever the cables connecting it to the still-hovering descent stage. The descent stage then climbs and accelerates away in the preplanned flyaway maneuver.

That is not the same thing as an explosive bolt.

Perseverance's umbilical data cable and bridles were cut by exploding bolts. This is the same method that Curiosity used.

Exploding bolts are very commonly used in space missions. This is for several reasons. First, the fasteners must be strong enough to hold the pieces together throughout all of the vibrations and motion a spacecraft must endure as it launches. There must be absolutely no chance of them separating, otherwise vital components could break. However, they must also be able to release at precisely the right time, and very quickly at that.

An exploding bolt is extremely simple, and has a very low chance of failure. Since NASA has been using these for decades, they know how to use them very well. And NASA likes using technology they already know how to use. Could they have made a fancy mechanism to properly disconnect the cables? Probably. But the more complicated the mechanism, the more likely it is to fail. And it's not like they are going to use those cables later.

This video does a very good job of explaining how explosive bolts (Hold Down Release Mechanisms) work on spacecraft (though it's not the one I remember seeing).

Edit: From the comments and other answers, I see that the communications cable was cut with an explosive guillotine. I'm going to leave this answer up, though, as it provides insight into how the other cables were cut.

Not the answer you're looking for? Browse other questions tagged mars landing rovers perseverance or ask your own question.

10
What is all this about? (photo of several small cup-like structures on top of Perseverance)
6
Separation of the stages of Saturn V by pyrotechnics, what about electrical and mechanical connections?
6
Premature detonation of explosive bolts when landing on hot Venus?
1
Does Perseverance have a gnomon on it?
3
When the Mars 2020 and Mars Science Laboratory missions were in deep space, what antennas did they have available to communicate with Earth?

57
Curiosity: Why did they "reinvent the wheel" instead of using pressure tires?
12
How will SpaceX tie down a landed stage on the ASDS barge after landing?
15
How did the spirit rover land right way up after bouncing
3
How did images taken by Perseverance's landing stage reach Earth despite its crash landing?
3
Why does the Perseverance Rover do sample caching?
3
What's causing this stippling effect in photos from Perseverance's down-look camera?
0
How cold do Curiosity's & Perseverance's appendages get at night with all those sensitive cameras and lasers?