How did the Perseverance rover land on Mars with the retro rockets apparently stopped?

Is there an explanation for the absence of any sign that would demonstrate the eight retro rockets in the image below were really working? It seems that no gas was getting out of the nozzles. 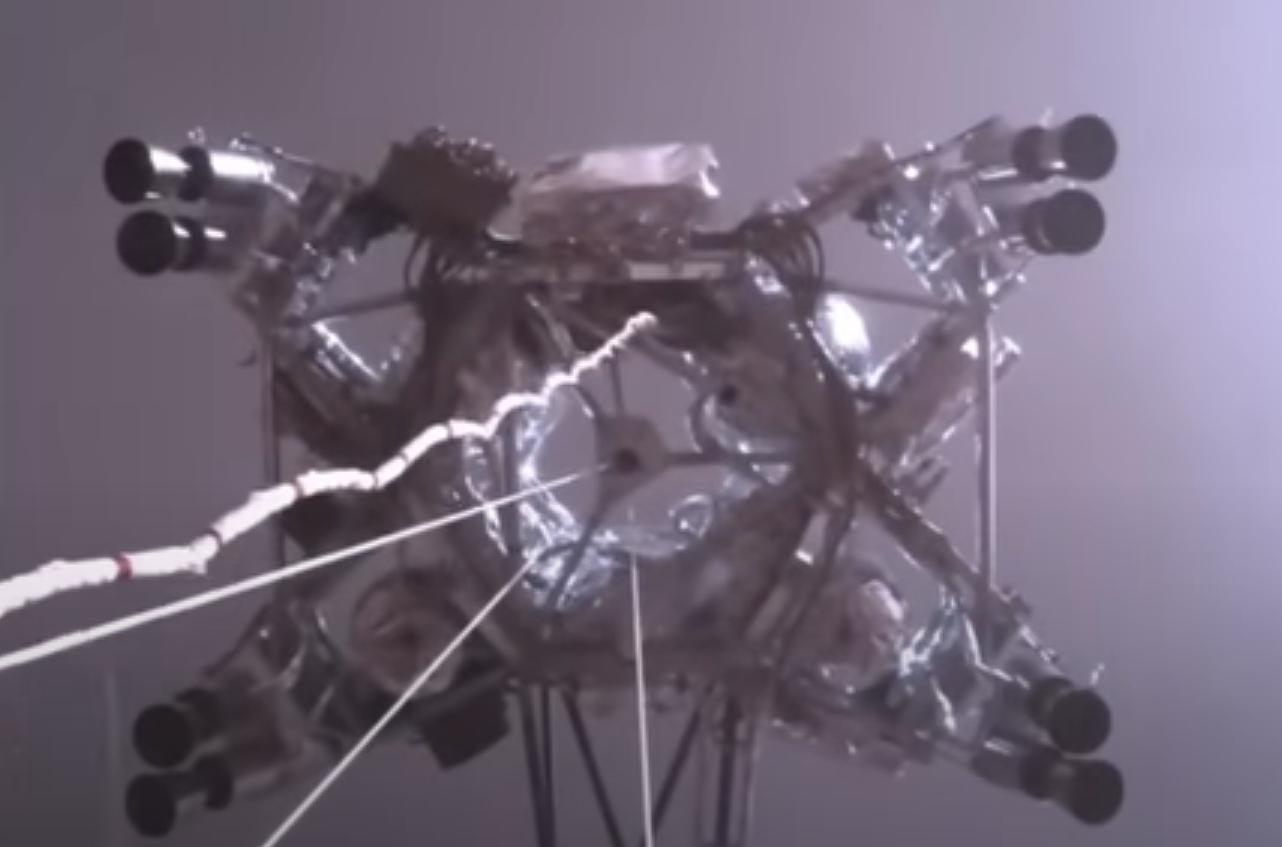 The sky crane of Perseverance rover with the engines apparently stopped

If you watch the coverage on YouTube, they explain hydrazine rockets burn clear. This is supported by the dust flying everywhere when it gets closer to the ground.​

It would be rather surprising if the exhaust from these engines was visible. The engines use hydrazine ($\mathrm{N_2 H_4}$) monopropellant, and the reactions involved (catalysed by iridium) are

We also know, from this paper (that copy wants you to pay for it, but there is a free copy here), that the exit temperature for MSL (aka Curiosity, same landing system presumably slightly lower thrust though), is about $217\,\mathrm{K}$. That's $-56^{\circ}\mathrm{C}$. If you put your hand in the plume you're going to freeze (and probably have all the skin removed from it since the exit velocity is extremely supersonic). In fact I think that the plume temperature is lower than the ambient temperature at the time of landing.

The reason it's cold is some combination of the last, endothermic, reaction, and the adiabatic expansion of the gases as they leave the engine, I think.

So we can put all of this together:

(1) The reactions take place in the presence of an iridium catalyst, which is inside the engines. This means in particular that all of the exothermic reactions are taking place inside the engine (and presumably a lot of the heat produces is then going to drive the endothermic reactions). And, indeed, parts of the engines get very hot and you can see this. The exhaust products are not still reacting because they're not near the catalyst any more.

(2) The reaction products are colourless gases. There's no soot or other awful crud from partial combustion as you get with, say, kerosene rocket engines. There may be some small amount of crud which has come from the inside of the engine, but if the engines are working well this will be a tiny amount of material.

(3) The exhaust plume is cold: tens of degrees below the freezing point of water.

So what you are looking at is a plume of colourless gases at a temperature somewhat below ambient. And, not surprisingly, you can't see it.

In fact, I'd expect that the best chance of seeing the plumes would be to see any residual ammonia and hydrazine condensing in them. I presume that the engines burn cleanly enough that not enough of these is getting into the plume to be visible.

One interesting thing is that I would expect that, on Earth, plumes from these engines probably would be visible. I'd expect this because a plume of very cold gas would rapidly mix with the air, and a lot of water vapour in the air would condense out in the now-much-colder mixture. So you'd get 'vapour trails' – plumes of, not water vapour, but an aerosol condensed from water vapour, or in other words fog. This doesn't happen on Mars because the atmosphere is extremely dry compared to Earth's.

As a note: this question is clearly at least tangentially related to yet another 'we didn't go to x' conspiracy theory. How likely does it seem that, if people were to stage such an imagined conspiracy, they would forget to put the nice bright rocket plumes on their faked footage? Because, to me, it seems not likely at all.

If you look very closely at the video you'll find that the top-right engine is glowing red inside because, while hydrazine burns clear, the engine chamber is still 1000 °C hot.

This has been explained also by Scott Manley on Youtube where you can see the footage:

You can compare with the footage of the Apollo lunar module ascent stage departure: the engine produces no visible flame

Indeed! Here is a screenshot from the Smithsonian National Air and Space Museum video "Apollo 17 Liftoff from Moon - December 14, 1972", found in How did NASA get the video camera on the Moon to track the LM ascent stage, considering the substantial delay? See also the excellent answers to Exit film of moon landing departure and this version of the video found in Gizmodo's How NASA Captured This Iconic Footage Of Apollo 17 Leaving The Moon 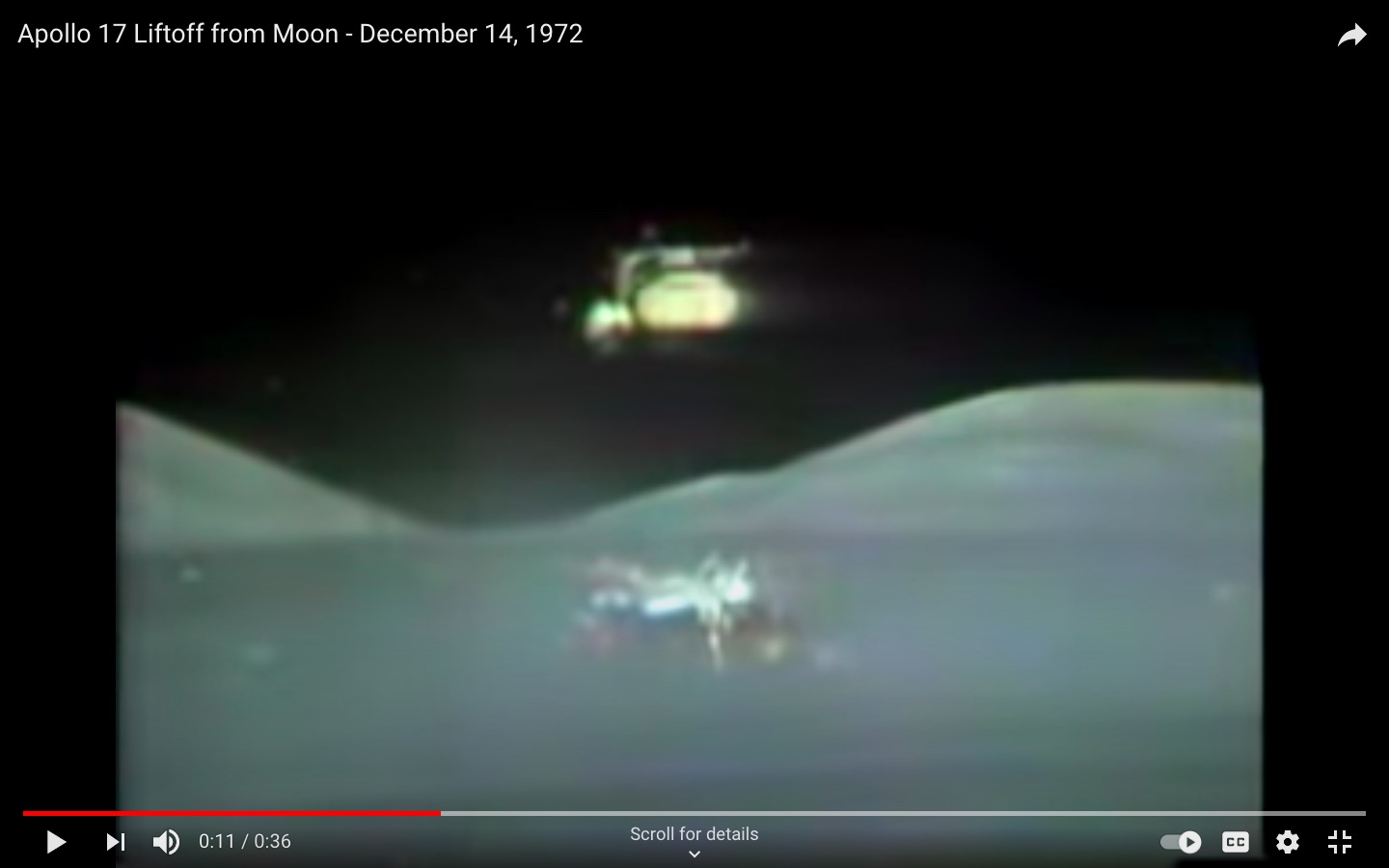 3
Perseverance landing and the skycrane
57
How do we know the Apollo Moon landings are real?
20
How did NASA get the video camera on the Moon to track the LM ascent stage, considering the substantial delay?
9
Exit film of moon landing departure
17
How did NASA's Deep Space Network encode and broadcast music to Opportunity?
-7
Why did the communication cable of the Perseverance rover make an angle so great with the other three cables?
7
What were the Curiosity sky-crane’s descent engines?

32
Who took the Curiosity rover's self-portrait photo from the surface of Mars?
7
What kind of rocket will ESA(?) launch from Mars? Who will build it?
9
How long could the Mars helicopter Ingenuity keep up with the Perseverance rover if it wanted to?
5
Why did NASA intentionally crash-land the Curiosity and Perseverance sky cranes on Mars?
2
What were Mars 2's conical aerodynamic braking shield and "gunpowder" engines?
2
Why did Perseverance have cameras to record the sky crane operations?
11
Why did NASA release Perseverance (rover) videos with a stop motion effect?
8
Why is there a black donut in Perseverance's SkyCam? Is it always used to block the Sun? (sky cameras on Earth don't) How does it work?