The Mars parachute opened against a black sky on Earth but a blue-magenta sky on Mars during Perseverance landing. How is it possible? [closed]

Ask Question
Asked 1 month ago
Active 1 month ago
Viewed 417 times
-3
$\begingroup$
Closed. This question is off-topic. It is not currently accepting answers.

I have discovered two images (see below) and I do not find an explanation for the different color of the sky as seen from below the parachute just starting to deploy. The video with the test performed on Earth says that the altitude was chosen in such a way as to simulate the conditions on Mars. 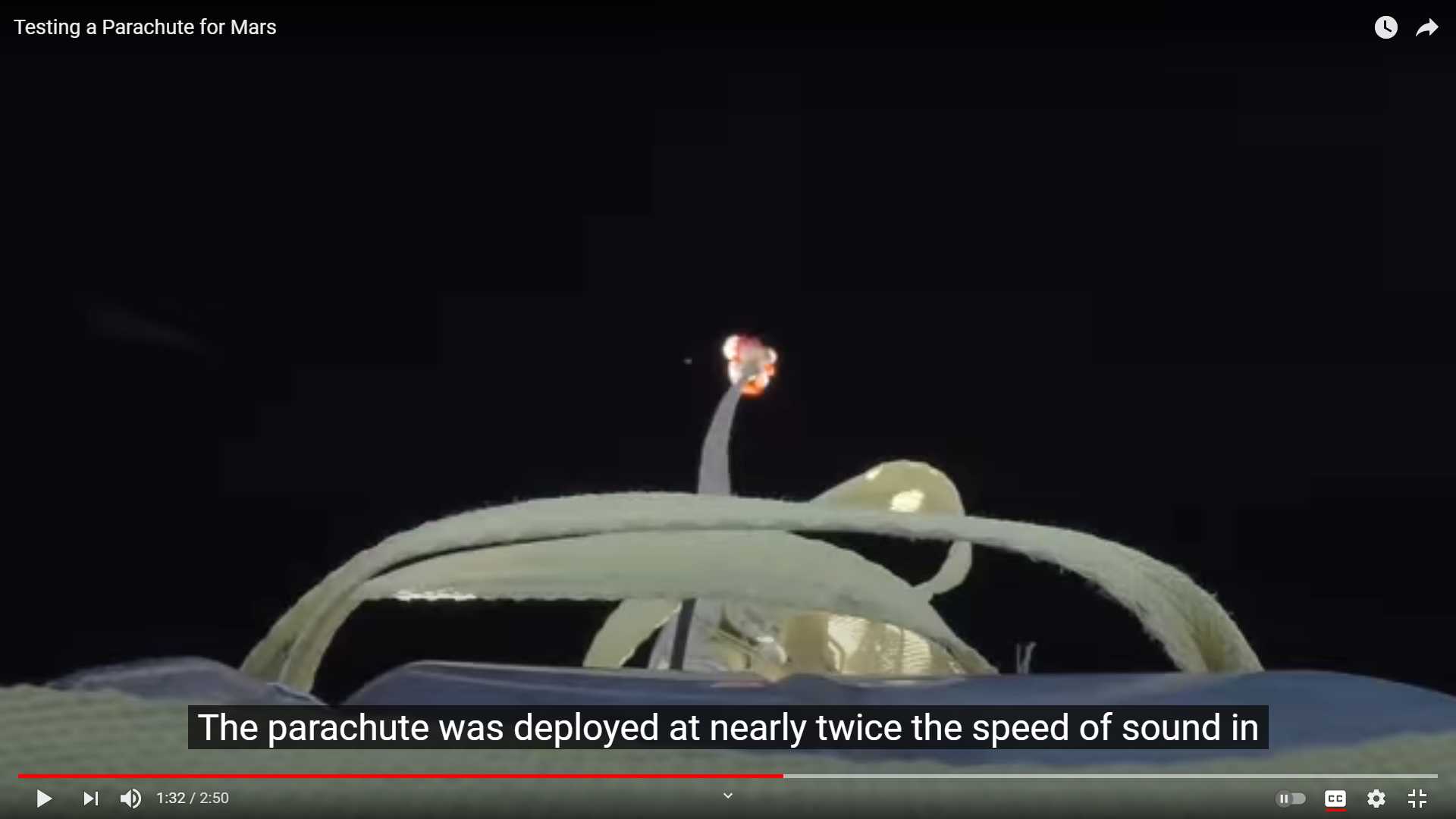 See: Testing a Parachute for Mars 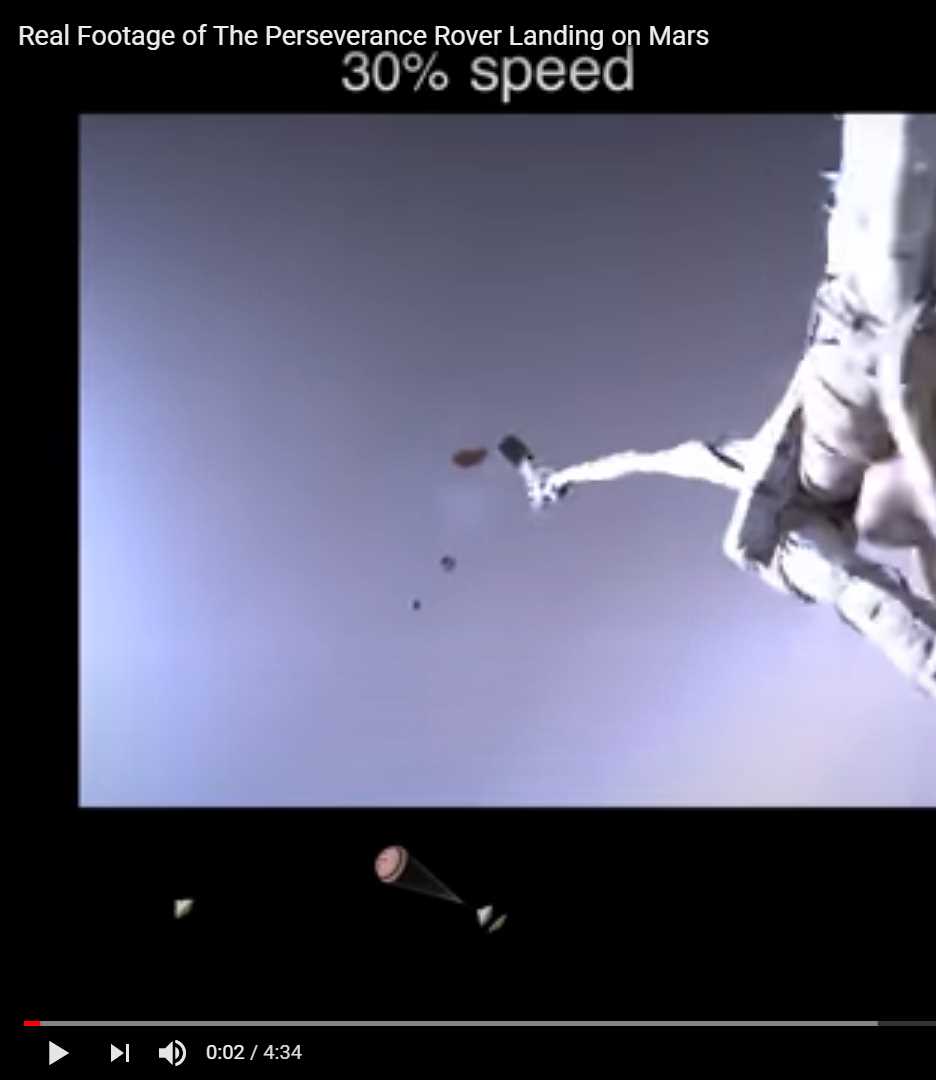 See: Real Footage of The Perseverance Rover Landing on Mars

Hard to say, there's a lot of factors at play. Different angle relative to the Sun. Different solar intensity. Different atmosphere. Different cameras. Different exposures. The only thing that's the same is the air density and parachute. You're going to get different pictures.

That video is from the third JPL ASPIRE (Advanced Supersonic Parachute Inflation Research Experiment) test. It's at 38km to simulate 10 km above Mars.

When onboard sensors determined the payload had reached the appropriate height and Mach number (38 kilometers altitude, Mach 1.8), the payload deployed a parachute...

"Earth's atmosphere near the surface is much denser than that near the Martian surface, by about 100 times," said Ian Clark, the test's technical lead from JPL. "But high up – around 23 miles (37 kilometers) – the atmospheric density on Earth is very similar to 6 miles (10 kilometers) above Mars, which happens to be the altitude that Mars 2020 will deploy its parachute."

38 km is well above where airliners fly, high in the stratosphere. Mars does not have a permanent stratosphere, 10 km is within Mars's troposphere.

The test launch happened Sept 7th at 13:30 UTC which is 09:30 at the Virginia launch site, early in the day which will make the sky darker. I don't know the time of day on Mars when Perseverance landed, but the Sun appeared much higher in the sky.

A lot of things can effect the color of a picture of the sky. Pictures and videos are not true representations of what you would see, they are chosen. These videos are to observe the behavior of the parachute and will be calibrated for that, not to get the true color of the sky, and they're using different cameras with different characteristics. Phil Plat discusses calibration problems on Mars.

In this video discussing the parachute opening at 18:35 you can see the sky color dramatically change as the parachute deploys and the camera adjusts its exposure levels. 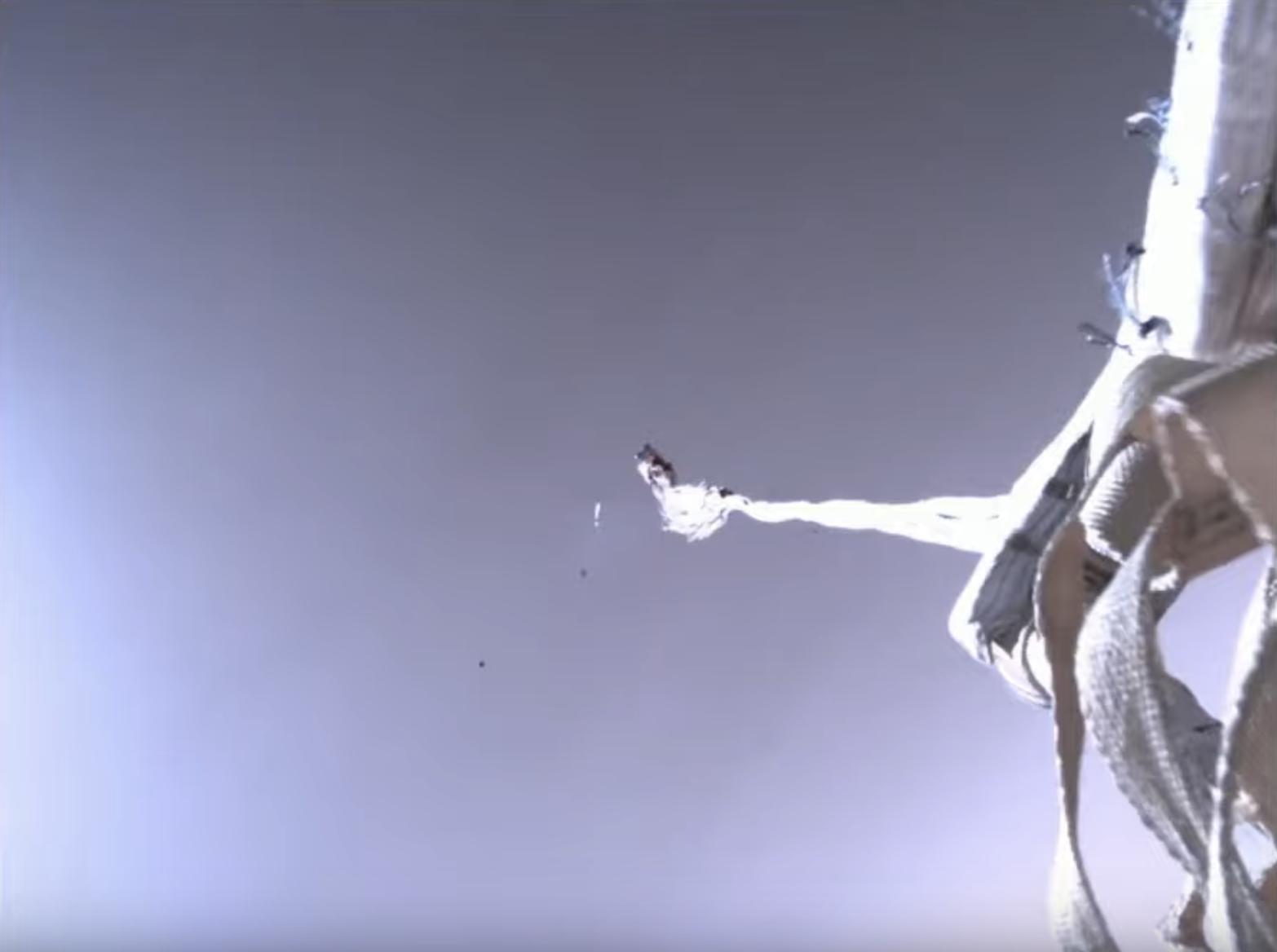 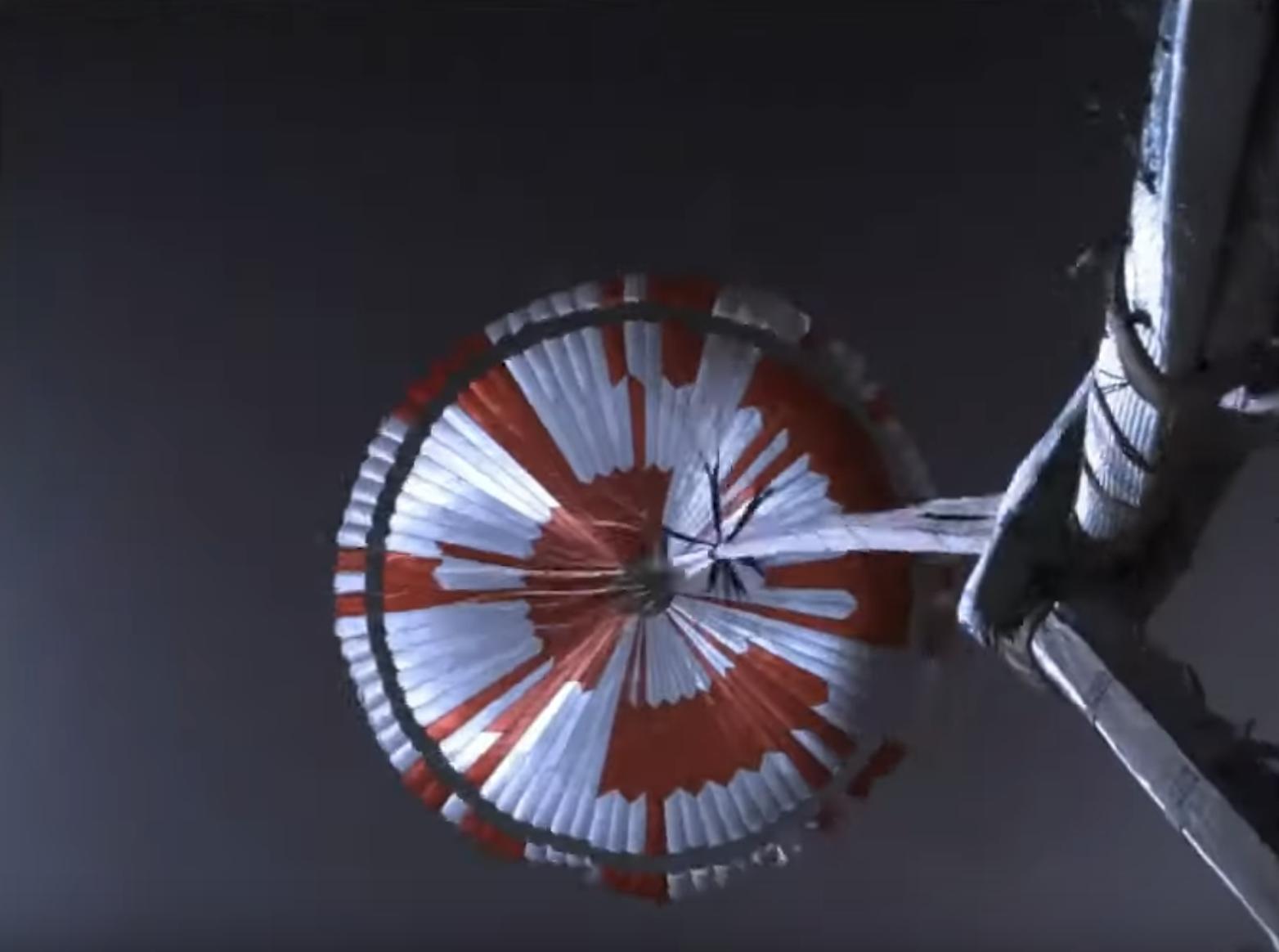 This is not because it blocks the Sun, the Sun is off to the left side somewhere and would not affect the exposure levels.

We see the same effect in the test video, though less pronounced. 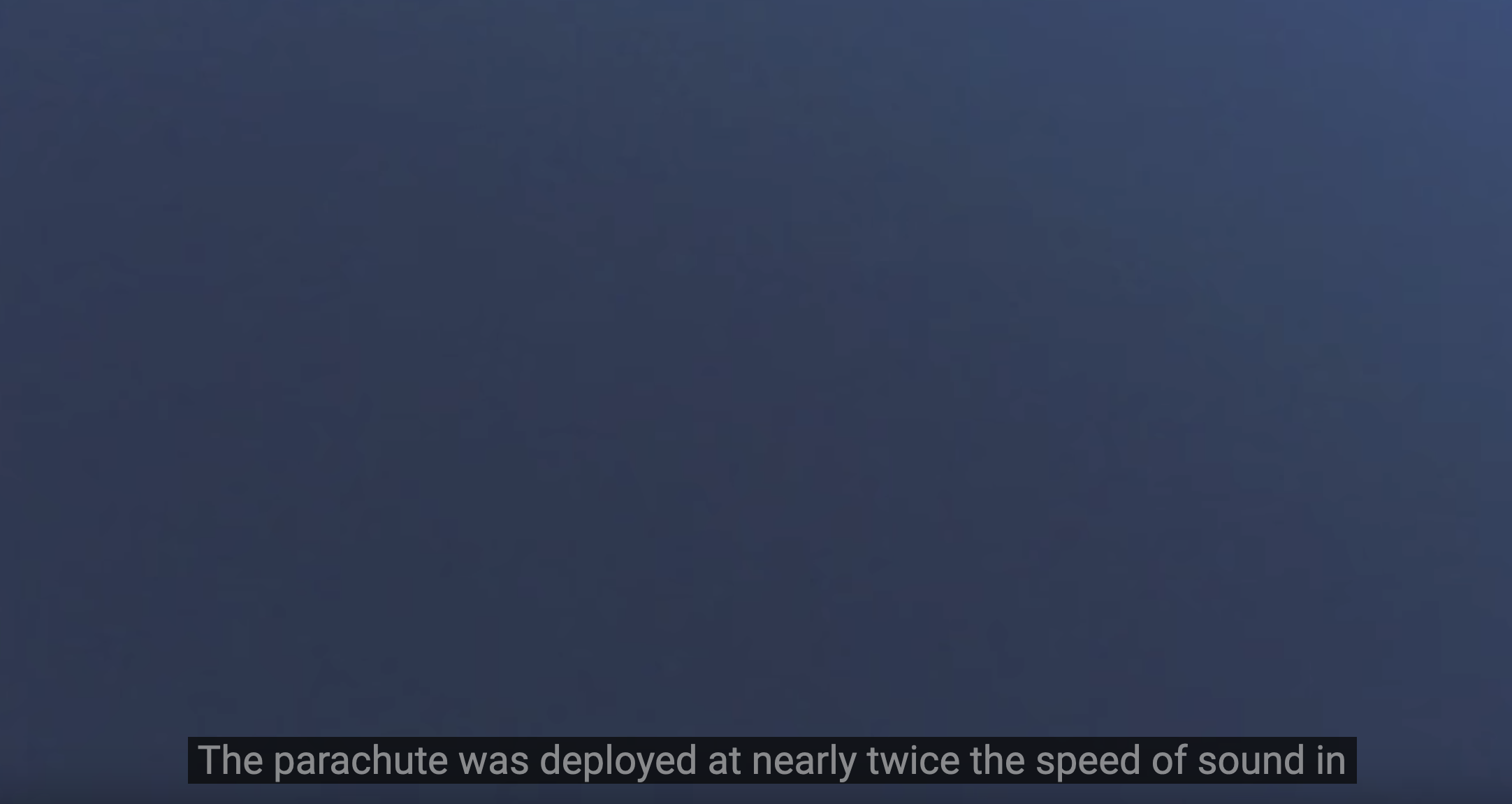 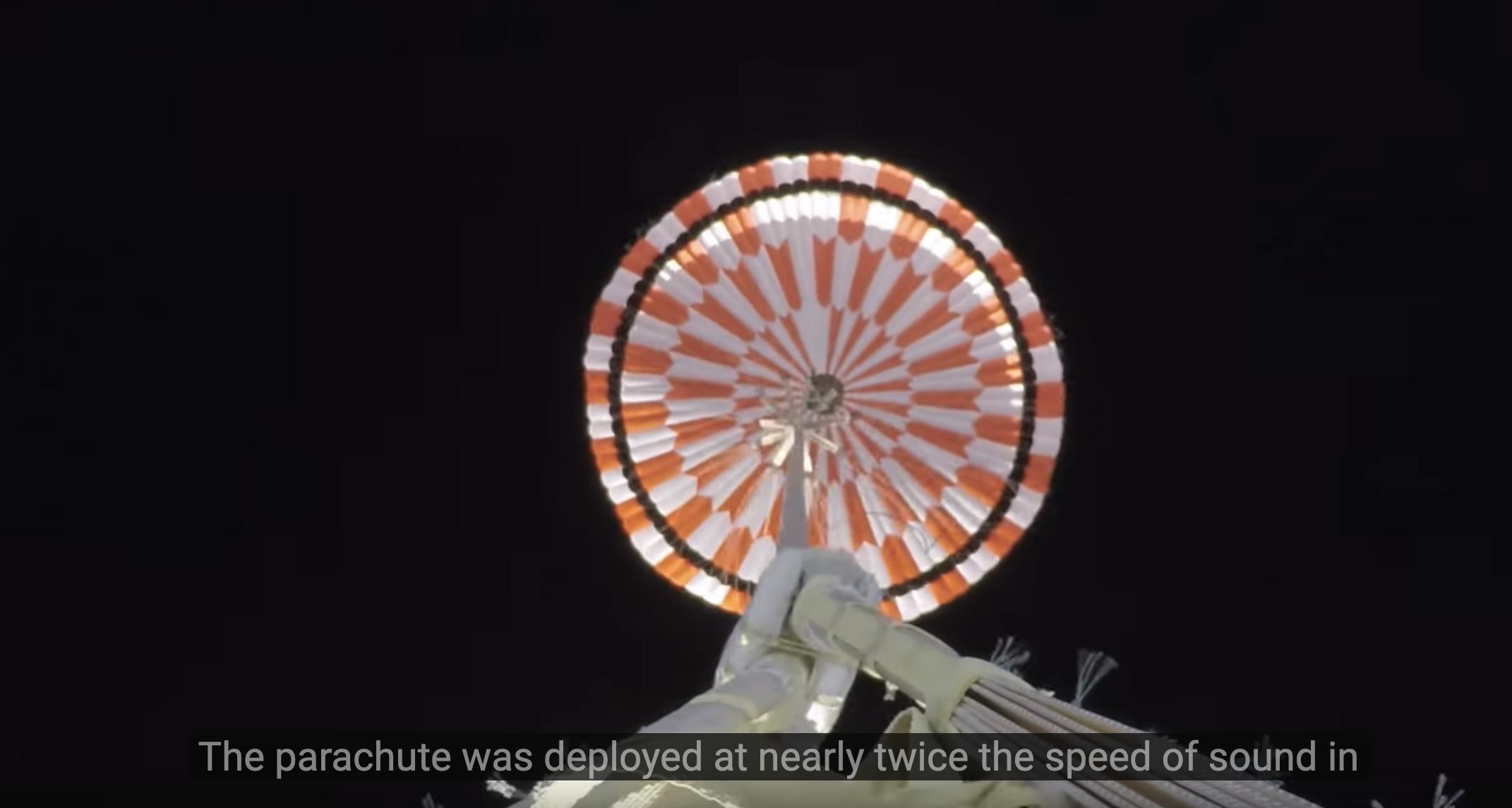 There's still a difference, but this provides a better apples-to-apples comparison than the images use in your question.

To have on Earth same airpressure of Mars at parachute-opening-altitude you must go very high in the sky, as pressure on Mars is 1/100 than Earth. So you must go "almost in space" to test a Mars parachute on Earth (don't know exact altitude) Hence you see black sky.

It depends a lot on the sun angle, and exposure settings. For example, here's the a screenshot from the Perseverance descent: 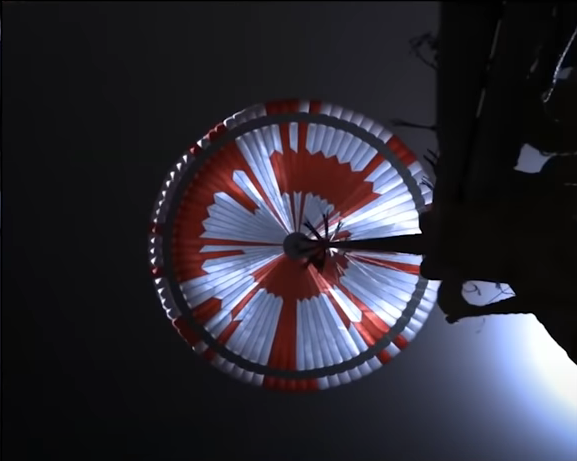 It's a dark sky. You can see the Sun on the bottom left corner. So the camera is clearly much closer to pointing to the Sun. It's also important to keep in mind that there is a bit of dust which does scatter a bit of blue light.

Secondly (and most importantly), the camera is slightly overexposed. This is evident when the parachute fully opens, and the camera immediately adjusts its exposure.

So the reason is most definitely lighting, and the fact that the camera was slightly pointed at the sun. I am quite positive that if the Earth test camera was overexposed as the Perseverance camera was initially, you would see a tint of blue colour (perhaps not as much because of the sun angle).

Not that I disagree with any of the other answers that it's largely impossible to judge the camera exposure, but one thing not yet discussed is that the phenomenon that makes the sky bluish is different between mars and earth. On earth the sky looks colored/bright due to Rayleigh scattering of light off nitrogen and oxygen, but on mars it's dominated by Mie scattering of light off of dust particles. If there was no dust in the atmosphere on mars, it would look similarly black. On earth, there's very little dust in the atmosphere at such a high altitude where the pressure is similar to mars. There have been no geologic processes active on mars for a long time which would strongly condense dust back into solid rock, so it's just a lot dustier than earth.

EDIT: This page has some good explanations and diagrams on the difference between different types of scattering.

-7
Why did the communication cable of the Perseverance rover make an angle so great with the other three cables?

2
Is the entire underside of Schiaparelli one big crushable-structure?
6
Why would Mars' sky appear blue at dawn and dusk, but red during the middle of the day (reverse of Earth)?
4
How was sky crane (used on Mars Science Laboratory's Curiosity) tested?
4
What is the purpose and necessity of this giant structure being used in tests of China's Mars lander?
6
How did Spirit and Opportunity identify ferric sulfate and jarosite on Mars?
6
How could the landing date of Perseverance Rover be fixed irrespective of 26 days launch window?
5
What kind of rocket will ESA(?) launch from Mars? Who will build it?
16
Are launch windows to Mars avoided if they result in landings during dust storm season?
6
How tall are the “cliffs of the delta” in the Perseverance rover's landing ellipse?
3
How did images taken by Perseverance's landing stage reach Earth despite its crash landing?