Why are minimum three artificial satellites required for radio-communication all around the Earth?

Artificial satellites orbiting the Earth have important applications for radio-communication around it.

Arthur C. Clarke explains it in their 1945 article Extra-Terrestrial Relays; Can Rocket Stations give World-wide Ratio Coverage? in Wireless World's October 1945 edition. (text version) A screen shot of a bit of the page from the link above is shown below.

As far as I can tell Clarke doesn't spell out exactly why they jump from "single station... half the globe..." to "...and for a world service three would be required..." but as other answers point out receivers can't practically look all the way down to the horizon; spacing at roughly 120 degrees around the Earth means that the worst case elevation of a satellite is very roughly 30 degrees.

Clarke also ignores coverage near the poles from geostationary orbits in this 1945 article.

A single station could only provide coverage to half the globe, and for a world service three would be required, though more could be readily utilised. Figure 3 shows the simplest arrangement. The stations would be arranged approximately equidistanly around the Earth, and the following longitudes appear to be suitable:

The stations in the chain would be linked by radio or optical beams, and thus any conceivable beam or broadcast service could be provided. 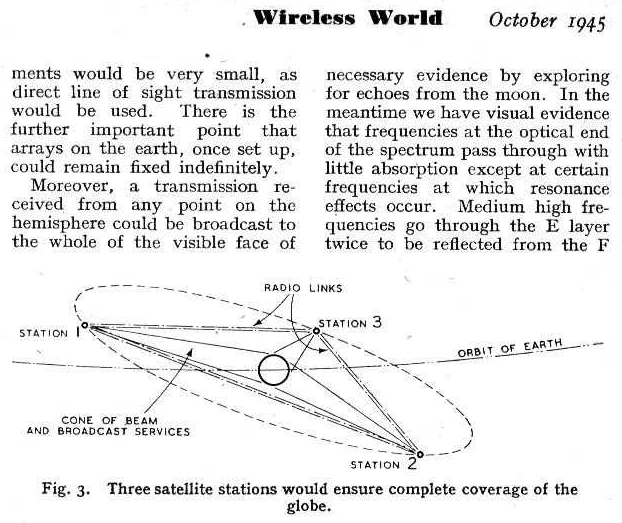 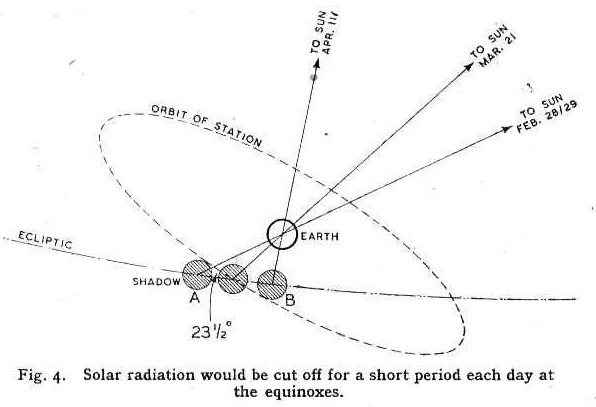 That is a very simple geometric problem. Imagine a globe on your desk and two table tennis balls. You hold one ball at one side of the globe and the other ball on exactly the opposite side of the globe. You notice that these balls can't 'see' each other, no matter how large or small the distance between the balls and the globe is.

Now imagine both balls in the equatorial plane of the globe, one at zero degrees longitude and the other at the opposite side at 180 degrees. Imagine an observer at the equator at 90 or 270 degrees. Is this observer able to see one of the balls?

You got a proof now that two satellites are not sufficient for radio-communication around the Earth. we know the minimum could not be 2.

Now we think of three balls in in the equatorial plane of the globe. One at 0 degree longitude, the next at 120 degrees and the third at 240 degrees. The places at the equator exactly between two satellites are at 60 , 180 and 300 degrees longitude. We imagine an observer at one of these places, he is able to see two of the three satellites, so these two satellites are able to see each other too. Repeat this for all three places. ( If the observer on Earth is not able to any satellite, just increase the height of the sats above ground. You may use the globe for a test, is it possible to see both the 120 and 240 markings simultaneously? But a geostationary orbit is very high anyway.)

But what about an observer at the north or south pole of the Earth? He never sees any one of the three satellites. But it was not required that the radio-communication all around the Earth using only three satellites should be useable from any place on the Earth.

Not the answer you're looking for? Browse other questions tagged artificial-satellite radio-communication earth or ask your own question.

18
Minimum number of satellites to image the entirety of Earth's surface at all times
1
How do Inmarsat 5 F4's beams correspond to all of these antennas and feeds?

26
Can a satellite orbit Earth so that it always has the Moon in line of sight?
18
Minimum number of satellites to image the entirety of Earth's surface at all times
42
Why are the GPS constellation satellites in such a high orbit?
15
How is RF spectrum usage coordinated in Mars orbit?
4
What would be a "big picture" understanding of how the orbits of Earth satellites are monitored?
4
Distribution of satellites by inclination
1
What is the process to verify the orbit of a satellite in a list of artificial earth satellites?