A mysterious flash of light on the surface of Mars while the Perseverance rover was landing. What can it be? [closed]

Ask Question
Asked 3 months ago
Active 3 months ago
Viewed 243 times
-3
$\begingroup$
Closed. This question is off-topic. It is not currently accepting answers.

A mysterious light that lasted a fraction of a second appeared on the surface of Mars while the Perseverance rover was descending. What can its source be? 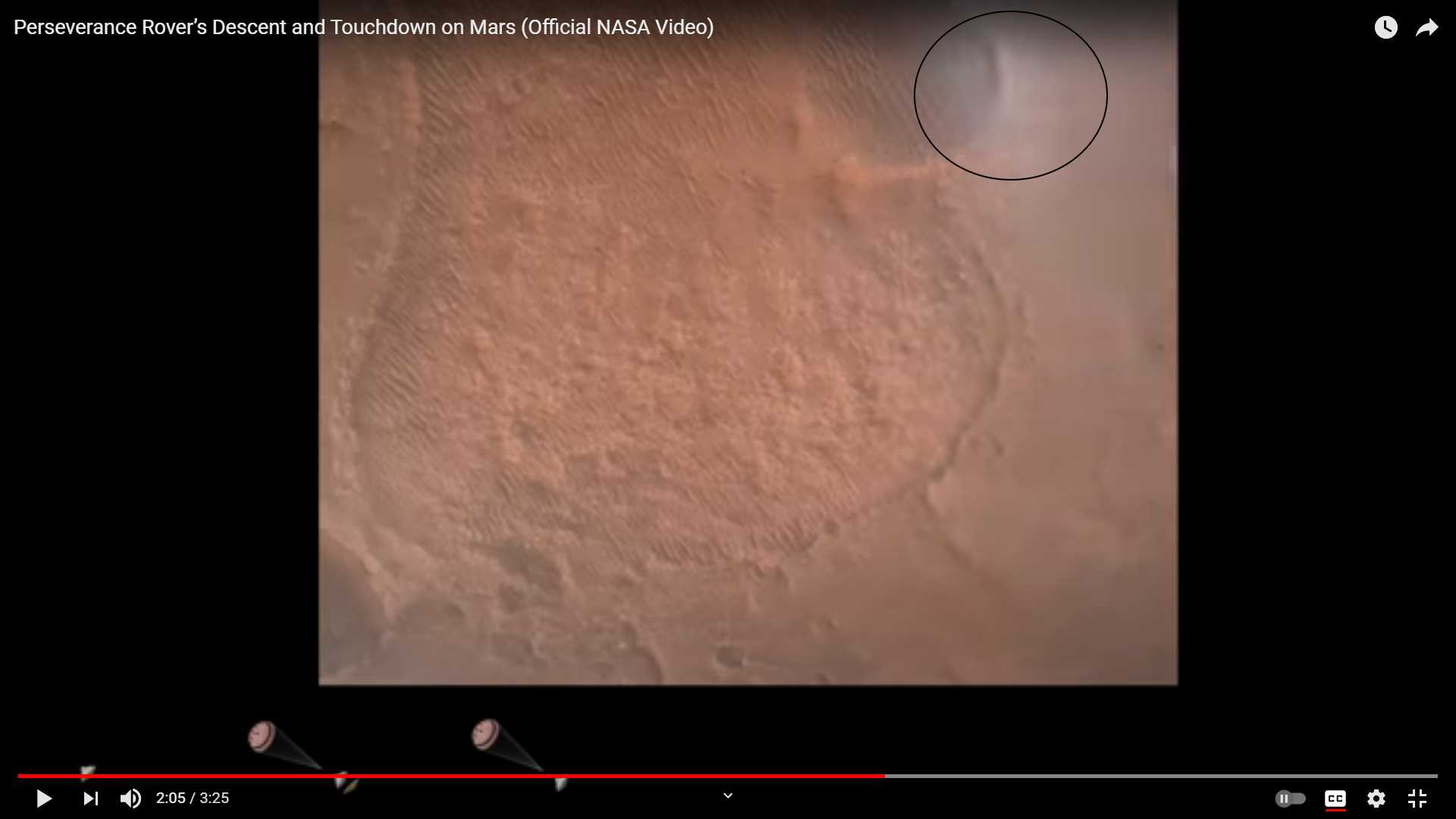 See: Perseverance Rover’s Descent and Touchdown on Mars (Official NASA Video). The light is in the black circle.

This is not, of course, 'a flash of light on the surface of Mars'. The backshell has just separated from the rover & skycrane assembly with the use of pyrotechnics which throw out a bunch of crud, and probably the engines on the skycrane are also in the process of starting and spitting out a load of partly-reacted hydrazine as they do so (same way an internal combustion engine often will spit out a bunch of partly-burned petrol as it starts).

Some of that crud is in the field of view of the camera for a moment.

As the video voiceover indicates, this happens exactly at the backshell separation time, and is almost certainly related to that. Seems to be a puff of gas, not a "light".

Looks like something similar to Plume Impingement to me. 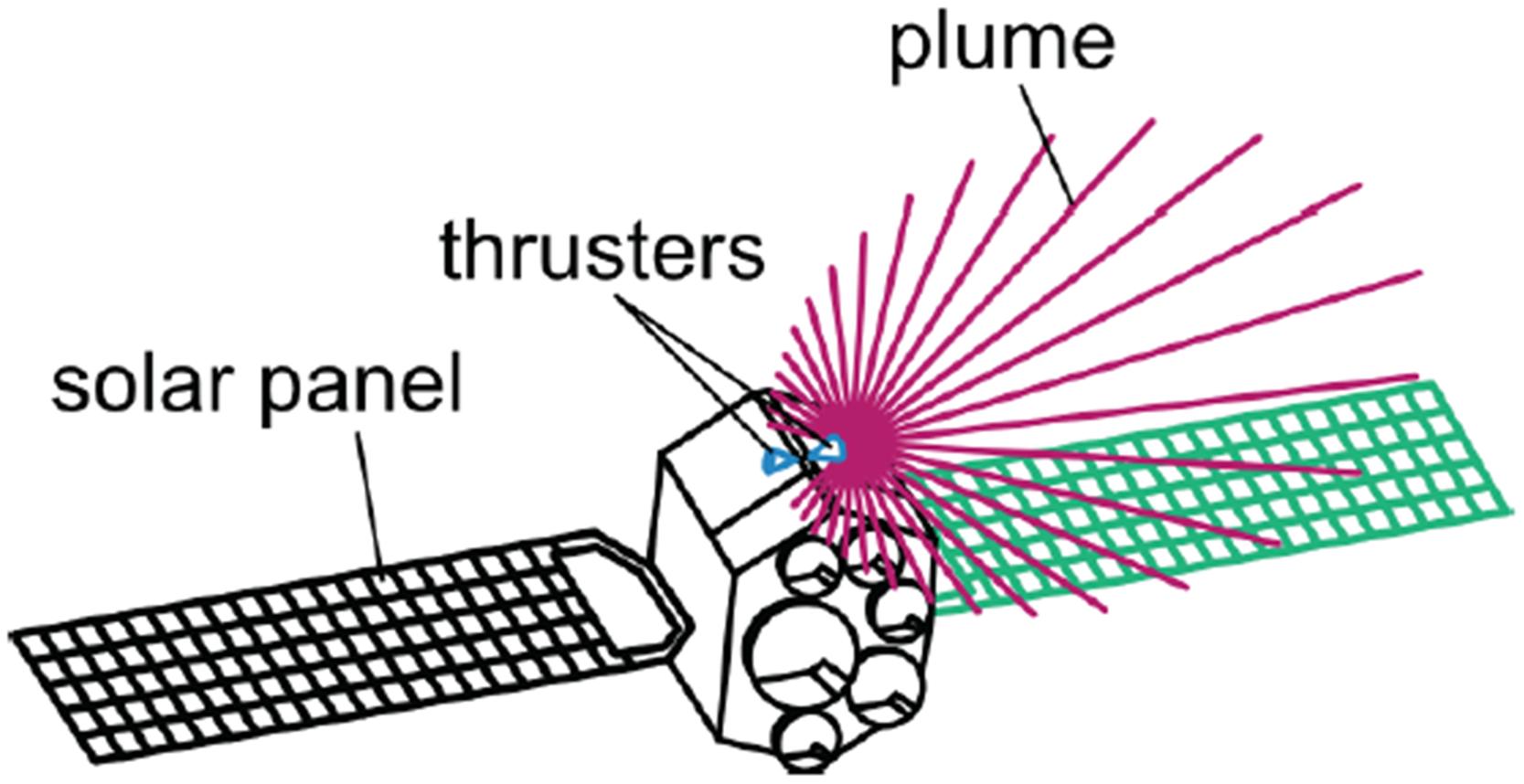 If you notice, the "flash" looks like some form of gas, and appears prior to what I believe was an attitude maneuver, as the direction of the camera footage changes abruptly afterwards.

Depending on the thruster technology, it requires priming before injecting fuel/oxidizer in the chamber and igniting it. So the gas may be the priming leaving the nozzle before the ignition that executes the maneuver. Priming could be the fuel itself without oxidizer depending on design.

Plume impingement is normally an effect that concerns the deposition of material or degradation of material on satellite surfaces, and a solar panel would be an example, but a thermal coating would also be of concern. It also causes undesired torque, which may degrade performance of wheel desaturation by thrusters.

As JohannesD noticed, it occurs right after backshell separation, which could mean some compressed-gas mechanism that jettisons the backshell, or the thrusters correcting attitude after the separation, which would likely cause some disturbing torque, the priming hypothesis explain why the flash appears before the maneuver rather than after.

Sorry about the somewhat speculative answer.

-7
Why did the communication cable of the Perseverance rover make an angle so great with the other three cables?

7
Perseverance Rover to drive carefully for months while helicopter hangs from underside?
6
How could the landing date of Perseverance Rover be fixed irrespective of 26 days launch window?
7
How will NASA set Perseverance to enter the atmosphere of Mars at the right location after traveling 7 months in space?
16
Are launch windows to Mars avoided if they result in landings during dust storm season?
6
How tall are the “cliffs of the delta” in the Perseverance rover's landing ellipse?
3
How did images taken by Perseverance's landing stage reach Earth despite its crash landing?
13
How did the Perseverance rover land on Mars with the retro rockets apparently stopped?