The paper on Ingenuity talks about the test setup of ingenuity

Associated metrology in the form of a force/torque sensor, a Vicon motion tracking system, stroboscopic lighting, a thermal camera, and temperature sensor monitors were developed to support operation in the chamber. The helicopter and test stand were instrumented with monitoring accelerometers and thermocouples. An infrared camera provided another means for monitoring the helicopter’s performance.

I understand the stroboscopic lightning as the type of closed loop lightning system that would make the rotor appear still.

Why would such a system be required? Why would one want to see the rotor as still?

If you illuminate the rotors with very brief, very bright, flashes of light then you can use a camera with a much longer exposure suitably synchronised to the strobe flashes to take pictures of them, and they will appear stationary. This means you can get a good idea of what deformations the blades are undergoing. This is a common technique for looking at rotating systems of any kind where you want to get a good understanding of what's happening.

It's much technically easier and cheaper to make very brief, very bright flashes of light than it is to build camera systems which will take very, very short exposures (which will in any case require an enormously bright light source), and if you have a setup where you can conveniently do that then it's generally a better solution.

You want to synchronise the flashes of light with the rotation for two reasons. Firstly you will be very interested in what's happening with the blades at very specific angles, such as when the blades pass over each other, when they are at right angles to each other, when they pass over bits of the body of the vehicle and so on. Secondly by running the strobe synchronously with the rotors you can film successive passes of the blades through the same position, and thus catch slower changes in them: for instance, there might be periodic deformations of them which happen at multiples of the rotation period, or deformations which are slower than the rotation period but unsynchronised with it, for instance, dependent on the length of the blades as waves of deformation of various kinds pass up and down them and so on.

Note that these slower-than-rotation changes can happen even if the blades have characteristic frequencies much higher than the rotation speed, for at least two reasons.

Firstly the system is not just the blade: it's the blade, the shaft, the bearings the shaft runs in, the motor, and the joint between the shaft & blade. That joint can, for instance, deform under various loads, and may end up having play in it (you hope not I imagine, but that's why you're doing experiments). In any case the resonances associated with this whole system could be very complicated, and could change significantly under load.

Finally by running the strobe very slightly faster or slower than the rotation period you can use it to make, essentially, movies of the blades rotating in slow motion, which you can then look at to see if interesting things are happening.

Something I forgot in an earlier version of this answer is that one of the very interesting things to look at is the pitch control of the blades, especially the cyclic pitch control.

The way a helicopter works (and the way Ingenuity will work, as you can see if you look at NASA's 3D model of it is that the pitch of the rotors gets adjusted dynamically to control the lift (and also to create forward motion &c), while the angular velocity of the blades stays more-or-less constant.

It runs at about 2400 RPM or 40 revolutions per second, and whenever it wants to have a sideways force the pitch of the rotors oscillates at 40 Hz so that there is more lift on one side and less on the other, the same way a helicopter seems to "lean forward" before starting to move forward. The tilting takes some of the upward thrust and directs it forward.

So in addition to checking for vibrations, order to check that the pitch changes smoothly and correctly during one complete 25 millisecond trip around the hub and get good depth of focus and no blur, they need to photograph with both a very bright light and a very short exposure. Strobes provide both; a means for a short exposure (as pointed out in the other answer) and a very bright light for the short time that the strobe is turned on.

I was going to say the short time that the capacitor discharges through the xenon tube but I don't know if solid state strobes are used now for this particular kind of metrological photogrammetry. 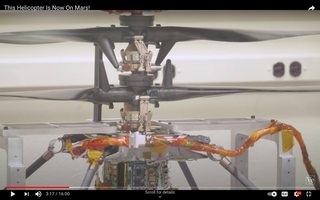 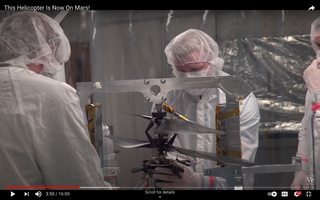 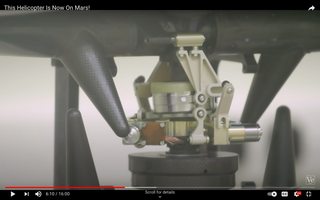 cued at 05:58 for the discussion of "collective and cyclic" pitch modulation:

Not the answer you're looking for? Browse other questions tagged mars testing ingenuity or ask your own question.

11
Why Ingenuity drone has 2 coaxial rotors, not quad-rotor
13
How did Ingenuity get such a sharp image of the shadow of its own high-speed helicopter blades?

13
What is the new horizontal test stand at SpaceX's McGregor, TX facility meant to test?
3
What exactly is a "Green Run test" for SLS that NASA is considering skipping?
20
How does the Saturn V Dynamic Test Stand work?
5
Up to what Mach/Reynolds numbers will Ingenuity be tested?
7
At the end of the test campaign, could Ingenuity be programmed to fly fully autonomously to the planned sample cache depot location?
5
Dust on Ingenuity solar panel
4
How would Ingenuity handle Martian Storm and dust devils?
5
Why wasn't the high-speed rotation regime for Ingenuity tested on Earth?