Is Perseverance unable to move?

The wheels show no sign of use, there are no wheel tracks in any of the raw images, and the where-is-the-rover page shows no movement from Sol 0.

I'm quite sure it can move. The first roughly 9 days after landing it needs to get its bearings, look around, plan out a path, and most importantly, be reconfigured to operate on the ground. For comparison, Curiosity landed on August 6th, and didn't start moving until August 15.

Perseverance landed on Feb 18, it has only been 11 days, I wouldn't worry too much. The press kit says a drive will happen within the first 16 days, so there's still plenty of time. Of some note is that Perseverance's first order of business is deploying and testing Ingenuity. The first thing that needs to be done there is to find a place to do the testing, after which Perseverance will drive. I'm sure basic wheel tests are required before starting that drive, but they won't be wanting to go very far until the location is determined.

Of some note, we know that Perseverance has deployed the High Gain Antenna, temperature sensor, and other instruments. Software updates have happened, and many many other things. It has been busy! Remember, Curiosity is still operating 8 years later, this rover is in it for the long haul!

Perseverance has just moved. Therefore it is safe to say that it is able to move.

Is Perseverance unable to move?

The JPL News item NASA’s Perseverance Drives on Mars’ Terrain for First Time explains that Perseverance has been quite busy! This includes both testing out each system in a careful and methodical way, and waiting for a software update on Sol 8 to convert it from "spacecraft thinking" to "surface vehicle thinking".

One thing at a time. Patience and Perseverance are virtues. 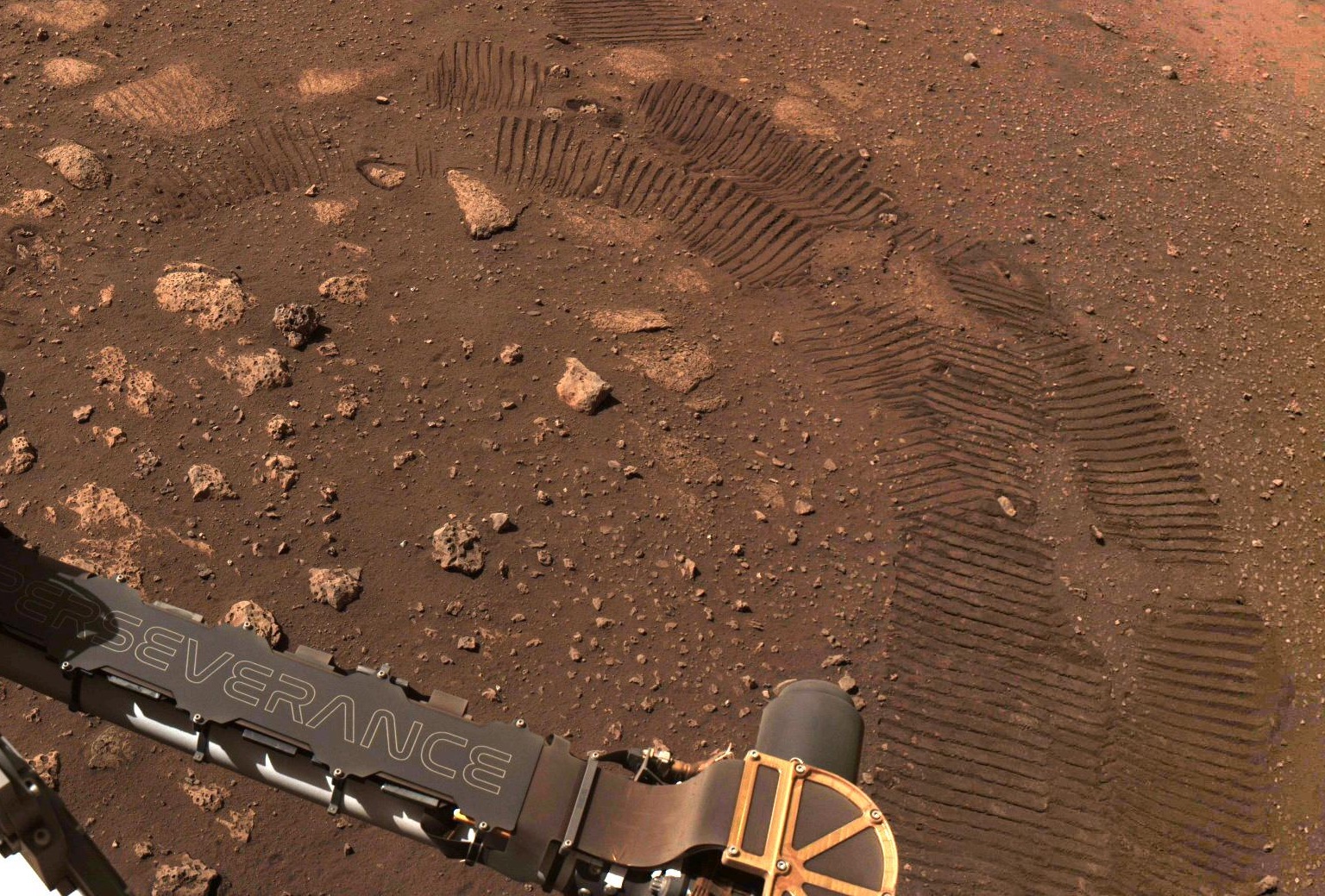 Cropped from PIA24487 found at Perseverance Is Roving on Mars

NASA’s Mars 2020 Perseverance rover performed its first drive on Mars March 4, covering 21.3 feet (6.5 meters) across the Martian landscape. The drive served as a mobility test that marks just one of many milestones as team members check out and calibrate every system, subsystem, and instrument on Perseverance. Once the rover begins pursuing its science goals, regular commutes extending 656 feet (200 meters) or more are expected.

“When it comes to wheeled vehicles on other planets, there are few first-time events that measure up in significance to that of the first drive,” said Anais Zarifian, Mars 2020 Perseverance rover mobility test bed engineer at NASA’s Jet Propulsion Laboratory in Southern California. “This was our first chance to ‘kick the tires’ and take Perseverance out for a spin. The rover’s six-wheel drive responded superbly. We are now confident our drive system is good to go, capable of taking us wherever the science leads us over the next two years.”

The drive, which lasted about 33 minutes, propelled the rover forward 13 feet (4 meters), where it then turned in place 150 degrees to the left and backed up 8 feet (2.5 meters) into its new temporary parking space. To help better understand the dynamics of a retrorocket landing on the Red Planet, engineers used Perseverance’s Navigation and Hazard Avoidance Cameras to image the spot where Perseverance touched down, dispersing Martian dust with plumes from its engines.

The rover’s mobility system is not only thing getting a test drive during this period of initial checkouts. On Feb. 26 – Perseverance’s eighth Martian day, or sol, since landing – mission controllers completed a software update, replacing the computer program that helped land Perseverance with one they will rely on to investigate the planet.

More recently, the controllers checked out Perseverance’s Radar Imager for Mars’ Subsurface Experiment (RIMFAX) and Mars Oxygen In-Situ Resource Utilization Experiment (MOXIE) instruments, and deployed the Mars Environmental Dynamics Analyzer (MEDA) instrument’s two wind sensors, which extend out from the rover’s mast. Another significant milestone occurred on March 2, or Sol 12, when engineers unstowed the rover’s 7-foot-long (2-meter-long) robotic arm for the first time, flexing each of its five joints over the course of two hours.

“Tuesday’s first test of the robotic arm was a big moment for us,” said Robert Hogg, Mars 2020 Perseverance rover deputy mission manager. “That’s the main tool the science team will use to do close-up examination of the geologic features of Jezero Crater, and then we’ll drill and sample the ones they find the most interesting. When we got confirmation of the robotic arm flexing its muscles, including images of it working beautifully after its long trip to Mars – well, it made my day.”

The camera mast was folded down for launch, and is now upright, allowing panoramic pictures to be taken. So that is a form of "movement", even if it is not roving.

Not the answer you're looking for? Browse other questions tagged mars rovers perseverance or ask your own question.

2
Did the Mars 2020 Mission do any science that wasn't done by Perseverance proper?