What does it take to upgrade a radio antenna to receive from the surface of Mars?

We have an answer about how hard it is to receive signals, but what's involved in upgrading an antenna to receive them? It's obviously more than just dish size and bolting on a new receiver as, for example, the 32 m Cheia antennas cannot receive X-Band, but the 32 m GHY-6 at Goonhilly can. What are some details to consider?

It's obviously more than just dish size and bolting on a new receiver as, for example, the 32 m Cheia antennas cannot receive X-Band, but the 32 m GHY-6 at Goonhilly can. What are some details to consider?

The limiting factor when uprating a parabolic reflector antenna to a higher frequency is usually the surface roughness/shape error. Basically, the antenna shape needs to look like a very good approximation of a paraboloid. Deviations from this shape result in losses which can be estimated using Ruze's equation:

Since an antenna is usually designed with a specified range of operating frequencies in mind, the requirement for $\epsilon$ will only be set as stringent as it needs to be for the highest design frequency. It takes a lot of work to make a dish uniformly parabolic, so generally an antenna engineer is not going to go out of their way to make it more uniform than neccessary.

That's not to say that a particular antenna won't be designed for a better (lower) $\epsilon$ than required. For example, an operator might choose to build an antenna for S-band tracking, but spec the dish to operate all the way up through X-band. They'll only install an S-band feed at first, but they're leaving their options open to add an X-band feed at a later date if needed. In this example, it becomes cheaper to plan to upgrade an S-band antenna to add X-band support rather than building a whole new antenna - but, this option would usually have to be planned for when building the original dish.

Another limiting factor can be construction of the reflector itself. If you were around in 90s, you probably remember these old wire mesh C-band satellite TV dishes: 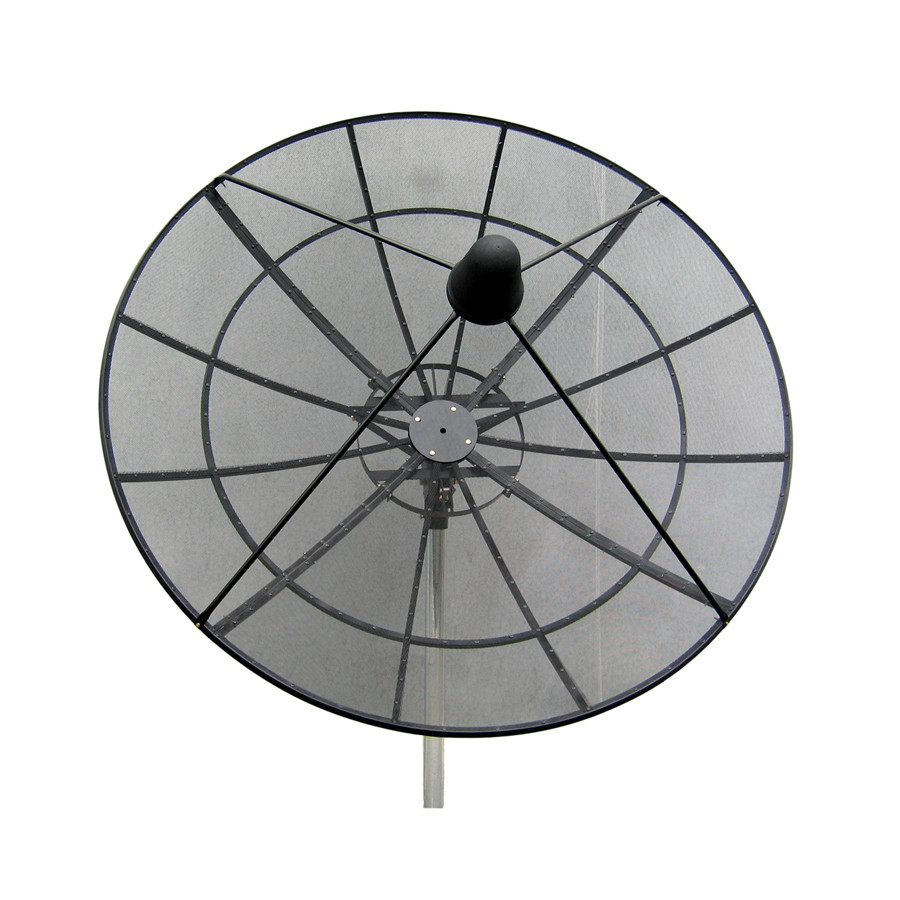 This type of lightweight, low-cost construction is very common for these C-band dishes that need to have large apertures yet also need to be affordable and installable by consumers. The wire mesh looks like a reflective surface at C-band, but if you go up in frequency, you'll quickly find that it becomes less and less reflective as the spacing between the wires becomes a larger fraction of a wavelength. So, this also limits how high you can go in frequency.

Finally, while it's typically not nearly as large of an effect, the dielectric surface of the antenna can play a role at higher frequencies. Large antennas are rarely bare metal, they're usually painted or covered in some sort of material to protect them from the elements. The choice of this material can introduce losses at higher frequencies, although for most practical satellite frequencies (especially those used for deep space) the loss is relatively minor.

However, if you have a large antenna with acceptable surface roughness, acceptable construction, and a compatible dielectric - yes, you can absolutely uprate it. Typically, this would involve replacing or modifying the antenna feed, which is the little cylindrical thing mounted at the dish focus (ie: where the arms on the front of the dish meet). Some feeds on very large antennas are mounted in the dish itself, with a subreflector mounted at the focus, but the principle is the same. The feed usually contains a low-noise receiver and downconverter on the downlink side and an upconverter and high power amplifier on the transmit side.

The up/downconverters in the feed convert the transmitted and received frequencies to a common intermediate frequency, usually 70 MHz or 140 MHz for low bandwidth systems or 950-1450 MHz for high bandwidth systems. All the radio equipment (modems, processors, etc) at the ground station are designed to operate at this intermediate frequency, so usually there's no additional work required beyond the feed change. Most space missions use communications standards published by the Consultative Committee for Space Data Systems (CCSDS), so provided that the ground station equipment is compliant to the appropriate CCSDS standards, there's usually no additional hardware required. Additional hardware may be required however if the mission uses a particularly newfangled standard (such as enhanced modulation or forward error correction), or if it uses something custom.

What does it take to upgrade a radio antenna 32 m dish antenna to receive from the surface of Mars?

@Peter's answeris excellent, since the wavelength is then only 37 mm and you'd like a good and electrically smooth parabolic shape to small fraction of that.

note: this answer already does a good job of calculating the link budget, here I've done it using specific information about a rover's transmitter and added some noise information.

The Curiosity and like the Perseverance rovers' high gain antennas have a gain of at least +22 dB, and we can plug this into a simple link budget calculation.

The transmit power is 15 watts per Table 2.9 Table 2-9. SSPA key characteristics in DESCANSO: MSL Telecom which is 12 dBW, so the received power should be

That's 3E-18 watts +/- a factor of ten depending on the distance between the two planets at the moment.

If we wanted to just verify we have a signal and to plot its Doppler shift over time, then let's choose a bandwidth $\Delta f$ of only 1 Hz. If the front end receiver is at ambient temperature of say 293 Kelvin, then the thermal noise $k_B T \Delta f$ of the receiver is only 4.E-21 watts, or a thousand times lower than the received signal!

Factoid: the Shannon–Hartley theorem helps us understand the relationship between signal to noise ratio (SNR) and maximum data rate possible in a given frequency window $\Delta f$. See also Am I using Shannon-Hartley Theorem and thermal noise correctly here?.

But how to point the darn thing?

$1.22 \lambda/D$ is only 0.09 degrees so you are going to need a precision pointing system. This seems pretty hard to build mechanically and then to figure out how to use. There aren't a lot of 8 GHz point sources in space you can search for and find as calibration. You should use the much stronger signals from orbiters around Mars if you want to do a search to find the planet by wiggling your dish back and forth.

Or you can use conical scanning as discussed in this answer to Why is the reflector on this millimeter-wave antenna spinning? (see all the other answers there as well!) 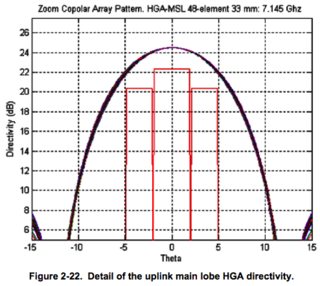 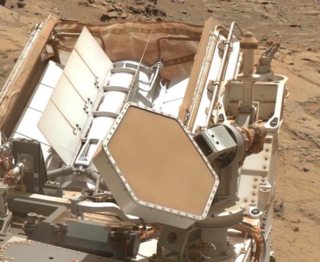 Not the answer you're looking for? Browse other questions tagged mars radio-communication or ask your own question.

22
How hard is it to receive direct signals from vehicles on the surface of Mars, and has anyone other than the DSN done so?
13
How to calculate data rate of Voyager 1?
9
How does Curiosity know how to point and move it's high gain antenna in real time?
6
Does the Ingenuity helicopter on Mars have a radio call sign?
4
Has the Curiosity rover ever communicated directly with Earth via its high-gain antenna? Signal strength & data rate?
6
How many independent demonstrations of optical communications between ground and space have been successful?
5
Identify this rocket and launch site from Gilligan's Island episode?
5
Why does NASA use higher frequencies even though they have worse Free Space Path Loss (FSPL)?
4
Quantitatively, why will optical communication be better than X-band for deep-space communications?

12
How can just making the ground broadcast stronger neutralize a zombie(sat)?
1
What is the highest non-optical frequency used or tested for use in deep space communication?
1
Which is stronger per Hz, radio signals from a Mars spacecraft, or Mars' blackbody radiation?
6
From whence (what ground stations) do the world's major space agencies receive signals from their missions?
4
First Ham Radio contact from space; what frequency, what kind of antenna, and how did they route the coax out the window?
3
Does the Juno spacecraft have an "open signal, by design"?
22
How hard is it to receive direct signals from vehicles on the surface of Mars, and has anyone other than the DSN done so?
6
Does the Ingenuity helicopter on Mars have a radio call sign?
4
Why are deep space "beacons" usually UHF, so low (in freq) that DSN can't hear them? And how unusual is it for a Mars lander to have an X-band beacon?
3
Radio antenna used to communicate with the Telstar 1 satellite in 1962