I've just seen this Anton Petrov video: New Type of Laser Levitation Could Help Us Explore the Mesosphere. It's about this new form of levitation that uses lasers to heat up the air underneath a craft, creating lift.

The video is based on a newly published open access paper in Science: Azadi et al. (2021) Controlled levitation of nanostructured thin films for sun-powered near-space flight. The abstract for this paper reads:

We report light-driven levitation of macroscopic polymer films with nanostructured surface as candidates for long-duration near-space flight. We levitated centimeter-scale disks made of commercial 0.5-micron-thick mylar film coated with carbon nanotubes on one side. When illuminated with light intensity comparable to natural sunlight, the polymer disk heats up and interacts with incident gas molecules differently on the top and bottom sides, producing a net recoil force. We observed the levitation of 6-mm-diameter disks in a vacuum chamber at pressures between 10 and 30 Pa. Moreover, we controlled the flight of the disks using a shaped light field that optically trapped the levitating disks. Our experimentally validated theoretical model predicts that the lift forces can be many times the weight of the films, allowing payloads of up to 10 milligrams for sunlight-powered low-cost microflyers at altitudes of 50 to 100 km.

This technology was pitched as something to help explore the upper atmosphere where traditional planes and balloons are unviable, but there is still too much atmosphere for satellites. How powerful would a laser need to be to make this sort of propulsion at a distance of e.g. 80 km feasible, and how large a craft could realistically be bought up to that altitude? Also, seeing as this propulsion type still relies on the atmosphere, could the craft release onboard reaction mass (perhaps hydrogen) to keep going, but still use a ground-based laser to heat the reaction mass?

tl;dr: The technique only works at low pressure, and works on a small pressure difference between top and bottom, so it's really only for extremely thin and lightweight "microflyers" and is not extendable to large spacecraft.

The video links to the open access paper in science Controlled levitation of nanostructured thin films for sun-powered near-space flight and there's a long PDF with more information and six videos in the paper's Supplementary Materials.

Let's look at the paper's summary:

In summary, this work demonstrated an approach to photophoretic levitation of macroscopic structures that does not require a temperature gradient within the object, offering a path to the development of affordable photophoretic microflyers for the mesosphere. We developed a theoretical model for thin disks, which showed agreement with the experiments done using low-cost fabrication methods. The levitation tests were successful at pressures of ~10 Pa and incident light intensity of 0.5Wcm2. We also presented a method to trap and control the hovering of the thin microflyers. Last, photophoretic levitation through Δα-force showed consistent upward lift force direction regardless of the direction of incoming light.

Our experimentally validated model predicts that the same approach can be used in the near space at altitudes between 50 and 100 km. Such microflyers can use sunlight or a laser beam from any direction to stay levitated for extended periods of time, allowing, for example, the mapping of wind flows at these high altitudes by tracking the location of these flyers using a radar or lidar. There is a large opportunity to further increase the force by increasing the difference in accommodation coefficients and reducing the infrared emissivity. Such improvements will allow the microflyers to carry payloads of up to 10 mg, which can consist of thin substrate or smart dust sensors for weather and climate applications, such as measuring temperature, pressure, or carbon dioxide levels.

How does it work? What is the principle? 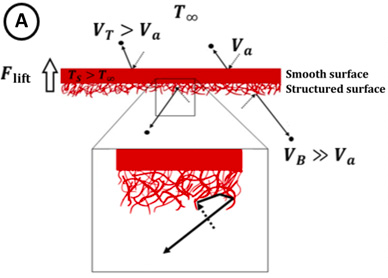 A thin, low mass disk absorbs sunlight or laser light and gets pretty warm or hot in a very low density part of the atmosphere where cooling is less efficient. As air molecules collide with the hot surfaces they scatter with a higher velocity on average.

On a micrscopic scale, pressure is just the sum of all the zillions of little impulses that a surface experiences by all the little molecules hitting it. If the sum of all the normal components on one side is lower than the other, then there is a pressure difference.

Integrate that over the surface and you've got lift!

note: this works when the mean free path of the molecules is long enough that they scatter away from the nanostructured surface before interacting with other molecules. Currently the technique will not work at sea level; you have to get these up into a low pressure part of the atmosphere some other way.

How much lift is there?

How powerful would a laser need to be to make this sort of propulsion at a distance of e.g. 80 km feasible, and how large a craft could realistically be bought up to that altitude?

I'll go along with @Uwe's assessment that a "large craft" will not ever be levitated by this particular mechanism.

A macroscopic polymer film with nanostructured surface, made of a 0.5-micron-thick mylar film coated with carbon nanotubes on one side, a disk of 6 mm diameter is in my opinion a total different thing than a craft.

The experiment with this micro film object was done in a vacuum chamber at pressures between 10 and 30 Pa. So reaching the upper atmosphere from the surface of Earth was not demonstrated.

At a height of about 80 km above ground the pressure is 10 Pa. To use those microdiscs at that height with a laser from ground, an area of about 1 km diameter should be illuminated. The actual position of those discs could not predicted precisely. If in the vacuum chamber a circle of 1m was illuminated, how much laser power is needed for 1 km diameter? The area of a circle is proportional to the square of the diameter, so we need a million times more power from the laser.

If only the air underneath is heated, you get no directional flow of the heated air. It is like to cut a combustion chamber in two halves and use only the upper half without any nozzle.

We would need about 100 times the diameter, 100 times the thickness and 10,000 times the air pressure for a disk of 0.6 m diameter in free air above ground. So we are about a 100 million times away from the finish line, much too far in my opinion.

We needed 40 years from a 1 kilobit memory chip to a 16 gigabit chip. 4 decades for a factor of 16 millions in memory density. This huge increase was done by quadrubling the memory size in every 3 years and 4 month, a factor of $2^{24}$ in 40 years.

Not the answer you're looking for? Browse other questions tagged propulsion design-alternative aerodynamics advanced-propulsion laser or ask your own question.

7
Power requirements for zapping debris with lasers from ISS
9
Is it possible to extend high speed data transmission with lasers to the distance Earth to Mars?
4
What is the speed that we can reach using tsar bomba as a propellant?
3
Feasible to use lasers / concentrated light to power solar cells in our solar system?
2
Using heated water as propellant for a DT-He3 fusion thruster
29
Why don't lasers last long in space?
1
Have "space lasers" really been used to temporarily blind US satellites?