I am working on the planetary science (on Mars) project for my master thesis. I am using MAVEN data for analysis. Data (spacecraft position) are measured in MSO (Mars Solar orbital) coordinate. I wanted to convert to GEO (Mars) coordinate. MSO or SS: The X-axis lies along this vector and is taken to be positive toward the Sun. The y axis lies in the plane determined by the Mars-Sun vector and the velocity vector and is orthogonal to the x-axis and z parallel to the northward (upward) normal of the orbit plane of Mars. GEO: Z is taken to lie along the rotation axis and be positive in the direction of positive angular momentum. The X-axis is defined to lie in the equatorial plane of the body, perpendicular to Z, and in the direction of the prime meridian as defined by the International Astronomical Union (IAU). The Y-axis completes the right-handed set.
I have no clue how to approach this problem. I have tried one approach

Ry and Rz rotation matrix in Y and Z coordinate respectively. for few cases, it showing nearby values but not accurate. any suggestions will be greatly beneficial.

Example: I have magnetometer data, which is measured by mag instrument, and values of bx, by,bz values are given in MSO coordinate. I want to convert this to GEO (bx, by,bz) COORDINATE. 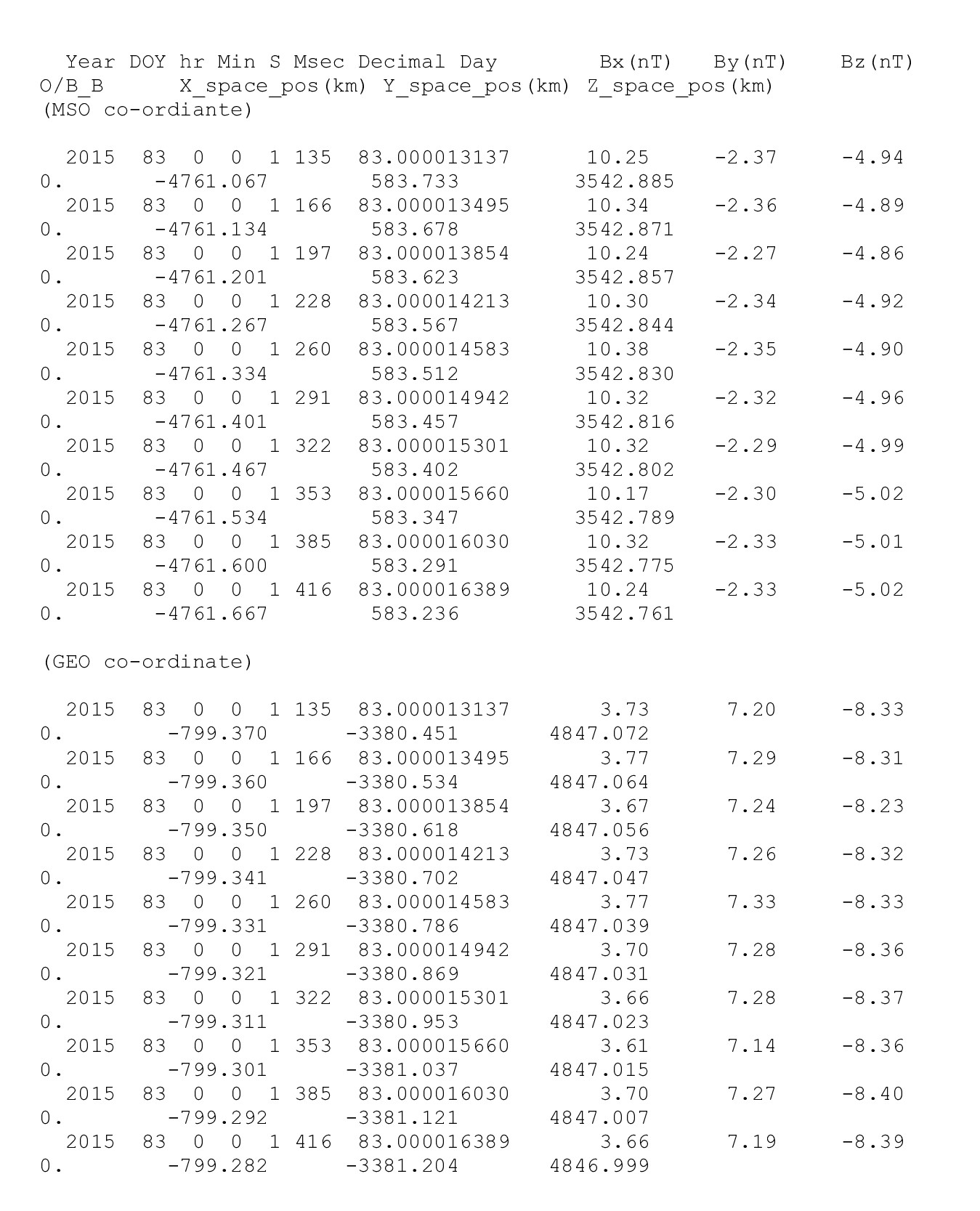 The values are given in both MSO and GEO co-ordinate. I was looking for the matrix which converts from MSO to GEO or vice versa for my understanding.

These data are available on the MAVEN website. MAVEN MAG instrument data set

I am answering this question in an indirect way. I am looking for a more mathematical formulation (When I asked this question) for converting from Mars Solar Orbital (MSO) coordinate to GEO coordinate or vice versa. As I exploring for solutions, I found spacecraft spice kernels will help in converting these kinds of coordinate transformations.
In the case of MAVEN (Mars Atmospheric Volatile EvolutioN mission) - Mars. ON the JPL - NASA website link for MAVEN spice kernels, I have found the link for downloading spacecraft-related kernels and the below codes helped me to reach the solution.

This approach can be applied to other spacecraft data also to derive in there respective planet coordinates system.

I checked for the above values and it is perfectly matching with the numbers.

I will essentially write the pseudo code of how to do it, I assume that SunVectorInInertialFrame function gives sun vector in Inertial Frame[Not the J2000 one]. And that Inertial 2 Geo is available as function of time as it is just function of sidereal angle, which itself is a function of time.

I hope that's what you were looking for

Not the answer you're looking for? Browse other questions tagged planetary-science coordinates maven or ask your own question.

9
How can one find the cratering rate for different parts of the Solar System
2
How could you create water and air from materials in the Solar System?
1
Diagram of Hayabusa 2 in "Hill Coordinate System"; what is that exactly? How to convert it to inertial?
1
How are the most sensitive seismometers on Mars protected from the most powerful jackhammer on Mars just a few feet away?
4
Coordinate systems for state vectors
1
How to calculate the solar irradiance (flux) on Mars. But,measurments are made at Earth orbit or at 1 AU