Did NASA ethylene scrubbers "blast out submicron particles" which attack viruses and bacteria?

In this open letter addressed to the US president, Joseph Urso, CEO of ActivePure Technologies, Dallas, Texas

Why Aren’t We Talking About Destroying COVID in Indoor Air?

An Open Letter on How to Open America

[...] By contrast, ventilation does not seek out the virus. Other systems are passive, slow, trap pathogens but don’t destroy them. Many are so dangerous, people can’t even be in the room. By contrast, our technology blasts out sub-microscopic particles that attack viruses and bacteria and destroy them in real time.2 Our system is safe for people and pets, and it works continuously.

*It evolved from the NASA space program and is now used by hospitals, schools, offices, restaurants, and other businesses, and in hundreds of thousands of homes.

NASA developed similar technology referred to as an ethylene “scrubber” in the mid-1990s to help with growing plants. The device would draw in ethylene, a gas emitted by plants that speeds up decay, and convert it into water and carbon dioxide, which help plants grow.

In 2017, the space agency acknowledged the filtration company’s efforts to introduce the technology to people’s homes.

ActivePure is a patented scientific process that dispatches super-charged, sub-microscopic particles at tremendous speed. These particles are created by reactions between ambient water and oxygen molecules, a patented matrix coating, and a specific wavelength of UVC light. The particles collide with viruses, bacteria, and air pollutants and immediately turn them into harmless elements.

Wow, there's a lot of woo in that press release.

NASA has had an interest in growing plants in space for a long time. Some plants give off ethylene gas, though, and there was a desire to remove this from the cabin atmosphere. Accordingly NASA developed (or paid for the development of) devices to remove ethylene.

The technology referenced in the press release uses

modified titanium dioxide thin-film as a photocatalyst...When operating in the presence of ultraviolet (UV) irradiation, the catalyst exhibits significant increases in the photo-oxidation rate.

So, it's a UV + catalyst system that cracks the ethylene (C2H4) to carbon dioxide and water, presumably in the presence of atmospheric oxygen.

As far as I can tell, those amazing submicron particles that savagely attack everything bad, are...ions.

NASA didn't "leave this technology off". It's been used on various space shuttle missions and on the ISS when plants are grown.

This is the only schematic I could find of the ASTROCULTURETM facility (emphasis mine). It's from the STS-73 Rockwell Mission Resource Kit, which I didn't find online to link to. 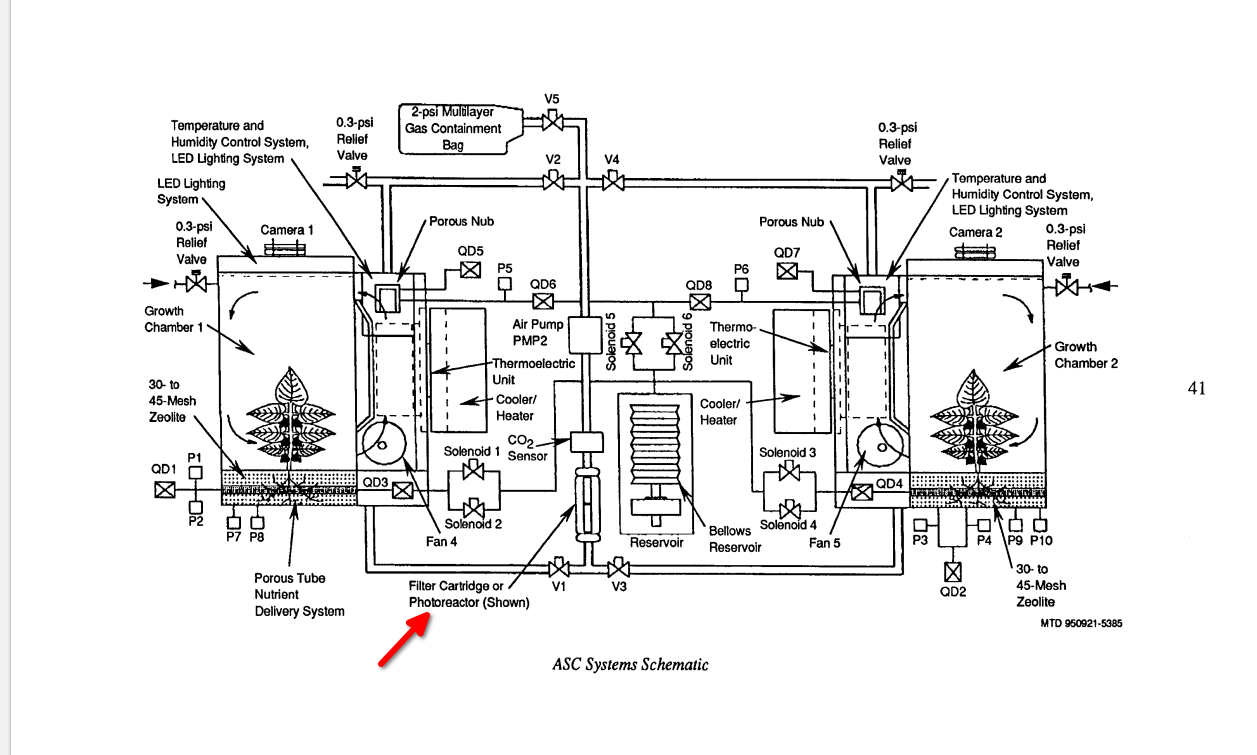 Not the answer you're looking for? Browse other questions tagged iss space-station health cabin-atmosphere or ask your own question.

19
Astronauts make a lot of CH₄ and some H₂ as well; do space capsules and space stations have systems to remove these?

8
Why did NASA assess 3 separate and over 6 hours long EVAs are needed to replace a single failed Pump Module (S1 PM)?
19
Astronauts make a lot of CH₄ and some H₂ as well; do space capsules and space stations have systems to remove these?