How hard does atmospheric drag push on the ISS? Is it more than one pound?

A comment under this question has me thinking; with it's huge main structure and giant solar panels the ISS presents a very large cross-section to Earth's rarified atmosphere at 400 km altitude. So much so that I have heard that every time the ISS goes into Earth's shadow the solar panels rotate to present a minimum drag surface, and some of them may do this even in the sunny parts of the orbit if full power is not needed to charge the batteries and run the systems currently drawing power.

Drag is bad because the ISS would soon reenter if not for regular shipments of rocket fuel from Earth to power engines that are burned to regularly re-raise the orbit, which sits at around 400 km these days.

Question: Roughly how hard does atmospheric drag push on the ISS? Is it more than one pound? The ISS is about 400,000 kg and so I'm guessing that the drag force must be quite substantial to make a dent in its velocity, even over months. 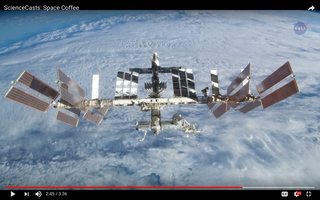 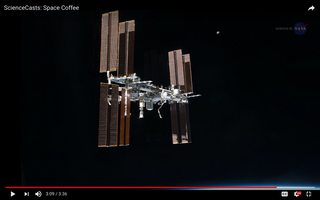 Edit: 10 meters per day is the current rate, taken from the image 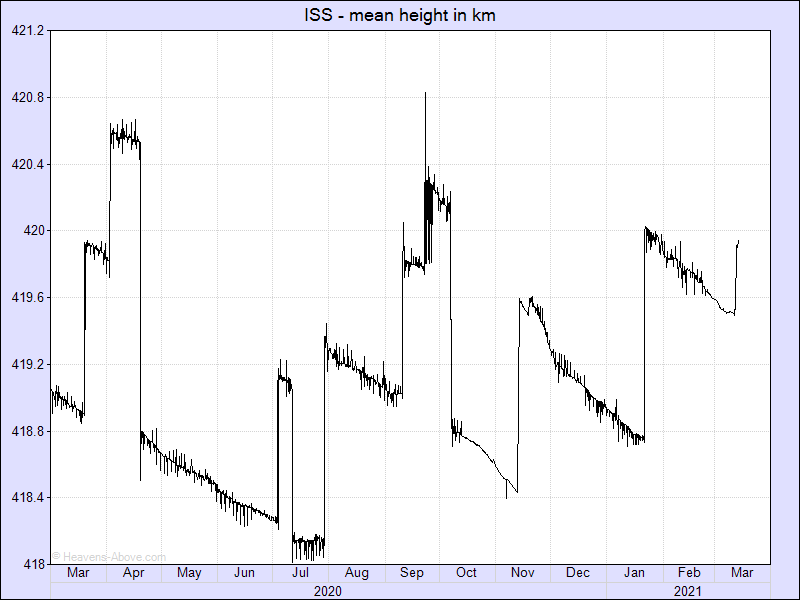 (source and credit: Heavens-Above). It may be unusually low, see the comments.

While Litho's answer addresses the first step in the question, of how much drag the ISS experiences, it doesn't directly address why that amount of drag might be worth worrying about, or spending money developing a technique to adjust the solar panel's angle to account for.

In fact, even if the amount of drag saved by rotating the solar panels were insignificant on a daily basis, designing that feature could still have made sense while developing the IIS, from a project-management perspective, because the ISS is a massive, long-term endeavor.

For one thing, shipping fuel to space is very expensive! Circa 2010, it cost about $210 million per year to keep the ISS in orbit. That's a huge incentive to invest in "minor efficiencies." It follows that NASA would be willing to spend a little less than \$1 million per year to save even half a percent of that fuel.1 And, considering the longevity of the ISS, they would have been willing to spend significantly more up-front.

1 They might be willing to spend more than the dollar amount of fuel saved; the "launch weight" budget of any mission is far more constrained than the "launch cost" budget.

I'm not sure how long NASA originally planned to keep this thing in space; but this NASA-RSA agreement from 1998 uses phrases like permanent human presence; mature operations; and, provide [...] maintenance plans five years in advance.

Additionally, because the ISS already needed a system to rotate the solar panels to track the sun, adding additional features to that big, unavoidable requirement would have been comparatively cheap.

Up to a point, adding more sophisticated logic to the controller would not have increased development costs substantially, since controller had to be built and coded, anyway. Perhaps it required upgrading the hardware to get better range-of-motion that was strictly necessary to track the sun.

That might affect the launch weight, which is normally a no-no; but if it saves weight on future launches, it might still be worth it. "One extra feature" would have added a small additional cost to the overall build budget.

Verification that the feature works and that it doesn't conflict with other design requirements could easily been more expensive than the feature itself; you have to make sure everything else still works when you go tweaking the power availability. Yet, the total cost from a man-hours perspective would have been amortized across hundreds of other features that were already intrinsic to the the design, and already had to be cross-checked against each other for mutual compatibility.

Furthermore, the entire point of the ISS was to be a long-running, upgradable system. They could have released a more sophisticated (but less critical) update to the panel control system well after the 1998 launch date --- at a time when schedules, budgets and oversight constraints had all relaxed somewhat. I'm sure they do over-the-air updates for some software-only upgrades today, although I wouldn't guess about how it worked in 1998.

Not the answer you're looking for? Browse other questions tagged iss atmospheric-drag reboost or ask your own question.

31
Which LEO satellite lost over 30 km of altitude in the geomagnetic storm of 13-14 March 1989?
48
How often does ISS require re-boosting to higher orbit?
13
How do orbital boosts affect the structural integrity of the ISS?
15
What is the ISS drag?
6
What is the density of the earth's atmosphere at an altitude of four hundred kilometers?
15
How precisely do we know mass of the ISS?
13
How steady is the atmospheric drag force experienced by the ISS?
9
This ISS trash deployment looks more like 2 feet than 2 inches per second, was it too fast or are these articles incorrect?
10
Does any site track the mass of the ISS?
11
What is the orbital boost acceleration of the ISS?
See more linked questions

9
How does the ISS adjust its solar panels?
12
Does atmospheric drag or reboosting maneouvers affect the integrity of microgravity experiments aboard ISS?
13
How do orbital boosts affect the structural integrity of the ISS?
9
How are the orientations of the ISS' eight independent solar arrays optimized?
8
Which engine worked the hardest to keep the ISS in orbit?
13
How was the Space Shuttle Orbiter used for ISS Reboost?
6
When jettisoning heavy objects from the ISS e.g. 2.9 tons of batteries+, how much angular impulse does the station get? Corrective actions necessary?
4
What orbit-raising propulsion system will Tiangong use, and how does it differ from that of the ISS in terms of performance and technology?