What is the origin of dark streaks on the surface of Mars in Tithonia Catena?

Several dark streaks originating (or ending) from dark spots on the surface of Mars can be seen in this picture. They are no longer than 200 meters, aligned longitudinally, and some of them seem curved. They are also not perfectly continuous. What are those? 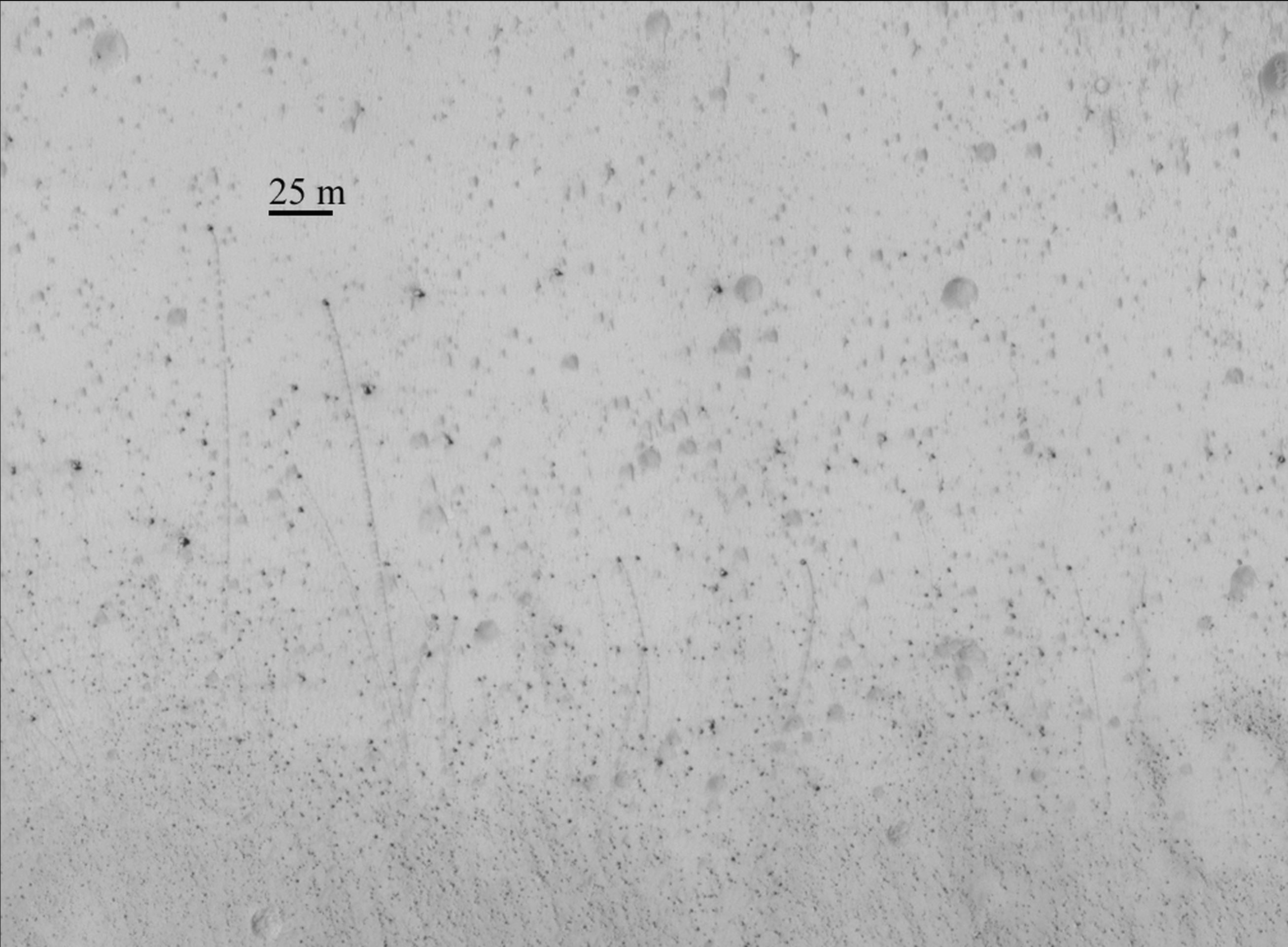 [Disclaimer: I have no source for this answer: it's too long for a comment though.]

It's helpful to look at the overall image: these marks appear at the right of the image, at the bottom of a slope. There are also some interesting characteristics of the marks: as you say they're not completely continuous, but also they all have little black dots at the end of them. Although there really isn't enough resolution I would also say that they lines become less dotty towards the ends with the black dots.

So, I suspect strongly that these are marks left by boulders: there's been some slip of things on the slope: most of the small stuff has stopped at the bottom of the steep part of the slope, but some larger boulders have rolled and bounced out onto the flatter land below it. The intermittent lines are their tracks, which are intermittent because they've bounced as they rolled. They get less intermittent at the ends because the rocks now have less energy, and the small black dots are the rocks themselves. The curves are kind of random because the rocks are kind of random. I'd guess that the underlying material is darker than the surface (or perhaps they've dug significantly into the surface and these are just shadowed areas).

This kind of thing looks very familiar to anyone who has stood at the top of a scree slope and rolled stones down it!

Not the answer you're looking for? Browse other questions tagged mars hirise or ask your own question.

5
What's the scientific evidence of water for return trip methalox on Mars?

11
Any explanation for morphology of within crater formations on the northern Nili Patera caldera of the Syrtis Major volcanic plain of Mars?
57
Curiosity: Why did they “reinvent the wheel” instead of using pressure tires?
15
Is the “Mars blue dune” actually blue? And what makes it so?
5
What is the white stuff emerging from a hole on the surface of Mars?
1
What was the effective magnification of the Mars Reconnaissance Orbiter's HiRISE camera to acquire the detailed image of Earth?
0
View the surface of Mars via Hubble
5
Choosing a specific region to live on Mars, how important will the degree of dust there be, compared with the availability of water?
2
The Surface of Mars