Why do SpaceX Starships look so "homemade"?

Maybe this is not possible to answer, but I was hoping there was some reliable information available on this.

It seems to me that the SpaceX Starship rockets have sort of a homemade quality to them, like they were made in someone's garage with basic tools, vs even some of SpaceX's other rockets. They are not painted, just bare metal it seems, and they also don't look as smooth and streamlined.

Is there a specific reason for this, like keeping costs down, or speeding up production? Is it just a fundamentally different way these are constructed? Maybe this is just my untrained eyes, too.

It seems to me that the SpaceX Starship rockets have sort of a homemade quality to them, like they were made in someone's garage with basic tools

That is because they are!

The "zeroth" prototype, Starhopper was built from November 2018 to March 2019 literally in a dirt field in Texas, in the open air. When Elon Musk announced in December 2018 that SpaceX was abandoning carbon fiber as the construction material and switching to stainless steel, he also announced that they had already been building a prototype test article for several weeks.

Despite the fact that they were building Starhopper out in the open, in a field, on the side of a public road, a lot of people did not even realize that what they were building there was a spaceship prototype. The mental disconnect between what they were seeing and what their mental image was of how "spaceship are supposed to be built" was just too big for them to comprehend. Spaceships are built in cleanrooms by people in white coats with facemarks and hairnets, not by a hired tank welders in a dirt field on the side of a road!

And yet, that is exactly what SpaceX did. Including the tank welder part: according to the logos on the side of their trucks, Starhopper was at least partially built by contractors who normally build water towers. (Which is where the "flying water tower" joke comes from and why it is so delightful that SpaceX actually did turn Starhopper into a water tower instead of scrapping it.)

In the beginning, there was only a dirt field and a tent for workers to store equipment and parts in: 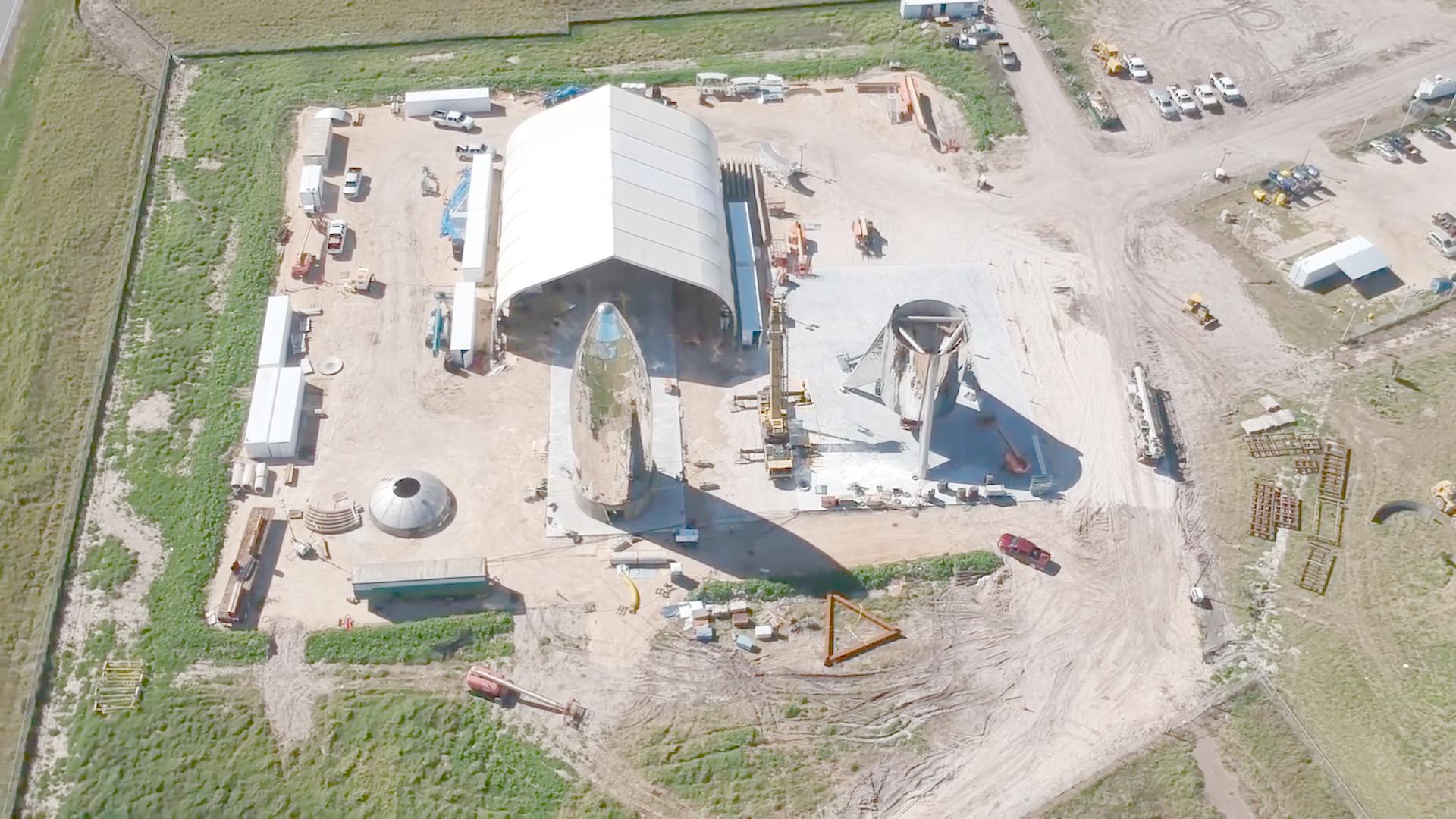 They didn't even have a windbreak or a way to secure the nosecone, which is why Starhopper flew without one: it was blown over and destroyed by the wind.

But, in some sense, they are not even building Starship prototypes. One of Elon Musk's mottos is "Build the machine to build the machine", and that is what they are doing down there. You can almost think of it like the factory is the prototype, and the Starships are just a by-product. (Which is for example why they partially built SN 12–14 and then scrapped them again without ever testing them).

So there are probably several things about which you are referring.

They mostly stem from the same issue, which is using Stainless Steel for the hull of the vehicle. This has benefits that other questions have addressed.

Why switch Starship from composite to Stainless?

First off, they do not paint it, since stainless does not really need paint (Though they did paint the mock up for the Lunar lander "Human Landing System" white. In that case, they would paint it white to help with temperature control while sitting on the lunar surface. Or else just to make NASA happy since they like white vehicles).

Also, finding paint that does not flake/burn off during high speed flight is non-trivial, (as the X-15 project discovered) and at least for now, they are not flying at high enough speeds to be worth figuring it out. (Era of SN8-11 flights. SN-15 may go faster/higher).

The welds started off very rough looking, as they did manual welding to both form the rings, and to join the rings, basically in a field. Then they added in new tents with automated welders and the quality (determined by success at pressure tests, and lack of pops) or at least visual quality has been improving with each iteration of the Starship prototypes.

Additionally, the skin looks pretty wrinkled, until they pressure test it at which point the skin puffs or expands just enough to smooth out a fair bit of the wrinkles. Then they detank and it gets a bit wrinkled again.

Elon has tweeted that they have or are about to get a planisher, a device to smooth welds out as well.

It’s important to keep in mind what SpaceX is trying to achieve here and follow its logic. Their goal is to make humanity a multi-planet species and build a self sustaining city on Mars. And this is not just a sound bite as so many company goals are, this really is what SpaceX are about. To achieve this goal it must be practical, both in engineering and financial terms and financial practicality is probably the harder part and drives many decisions SpaceX make.

They will need a huge number of ships and most of them will be used on multiple missions so the ship must be reusable, robust and must be cheap to manufacture and cheap to fly*. This was at least in part why carbon fibre was eventually rejected – it’s just too expensive. Stainless steel is suitable and relatively cheap. It’s also fairly easily assembled by welding and robust which are ideal properties.

SpaceX have looked at assembly processing and concluded that it is not necessary to build a giant expensive clean room and that it would be cheaper, easier and practical to assemble large parts outside. So that is what they have done. They have probably also figured out that making a Starship look pretty will cost money for little financial gain, so they don’t do that.

But perhaps even more importantly these are early prototypes and there is even less benefit in making them look pretty. Consequently they are what they are, built as cheaply as possible to do the job they are intended for (collect flight data and act as production pathfinders). As time goes on they will gain experience in welding and find process improvements which will help Starship look less rough and ready. They may also need to use a thinner gauge steel which may help.

I expect to see Starship slowly improve in appearance as time goes on, but it may always have a slightly rough look about it because it doesn’t need to look pretty.

I've worked in Aviation Maintenance since 1988. Commercial aircraft/spacecraft are made in a factory, most of the parts are stamped out with dies and presses made specifically for that part, with no seams and bending/shaping all automated. And they are painted. Paint covers a lot of blemishes, just like makeup does on people. If you ever get chance to get close up to the outside of anything that flies, you will see it is not quite so pretty, and the seams and rivets and patches are able to be seen.

I am sure once SpaceX puts a craft into full time production they will produce much prettier products. It was American Airlines that did not paint their aircraft to save on fuel. But they polished them constantly, and finally made the decision to start painting the fuselages of their aircraft due to corrosion problems, the main reason for painting metals.

Stainless steel going into outer space regularly will require paint as well, as it can be made to help reduce the radiation in outer space coming through the hull and the threat of corrosion. Stainless steel can still corrode. I like the idea of using stainless steel though, the extra weight will be negligible when going from the moon to Mars, but will need more fuel to get out of earth's atmosphere.

Any thing that will be reused often will benefit from a steel hull, and new alloys are being developed. Now we just need transparent aluminum for the windows.

unless you have actually built prototype anything (not that that is a big deal) its hard to explain. all the iterations of design start with an idea, which lead to a finished product evolved from the idea. things is, if you had the pristine space vehicles (that were lost) lined up on the ground that you could look at, you'd see this evolution. trouble is rockets tend to self destruct when they fail or crash.

if they did survive,, you would see the form following function.

in the car industry for instance, the vehicle starts with an external design and once that is approved, the internals are added.

happens with many things. trouble is thst is "bass akwards"

the need for complex re-engineer of parts to fit ever changing n spaces is what drives the parts industry and why GM for instance might make 20 or 39ndifferent water pumps, or axles, or seats or whatever.

so looks aren't so important as "what's under the hood" so to speak.

14
Why has SpaceX changed Starship from carbon fiber composite to stainless steel?

8
How vulnerable could space launch vehicles be to a "lone gunman"?
2
Why Spacex Lunar Mission date postponed?
4
Why do two Starships dock in such a manner their heat shields face opposite sides?
31
Why is SpaceX not also working on a smaller version of Starship?
11
Why did the SpaceX Starship MK1 prototype pop?
18
Why create a production line for the SpaceX Starship?
7
SpaceX Body Flaps - Why so Much Power Required
5
Will the SpaceX Starship's stainless steel skin ever look the same as the renders?
27
Why have SpaceX skipped the SpaceX Starship SN12, SN13, and SN14?