Could the flyaway of the Curiosity/Perseverance skycrane be aimed in a particular direction?

The Perseverance rover is collecting samples of Martian rocks and soil, which will be picked up and returned to Earth on a future mission. In this comment to another question, I note that the sample return mission will need to be careful not to hit the samples and equipment already on the surface.

Such a sample return mission could be delivered by sky crane, like Curiosity and Perseverance were. A landing ellipse can be chosen that avoids existing equipment and samples. However, once the payload touches down, the sky crane is flown away and crashed.

To avoid crashing into existing equipment and samples, does the Curiosity/Perseverance skycrane already have the ability to fly away in a particular compass direction (e.g. northwest)? If not, is it just a matter of software changes, or is more hardware needed?

(The backshell and heat shield are also considerations, but I will leave that to another question.)

Yes, the skycrane was able to fly in a certain direction. Once the rover was on the surface and the bolts were cut, the skycrane was programmed to angle itself forwards or backwards, whichever way was closer to North, and fly that way. This was to ensure that the rover wouldn't be damaged by the rockets going over it.

You can hear Al Chen, the EDL lead, explain it during the landing livestream here (timestamp 42:34).

Lets have a look to the Mars landing locations: 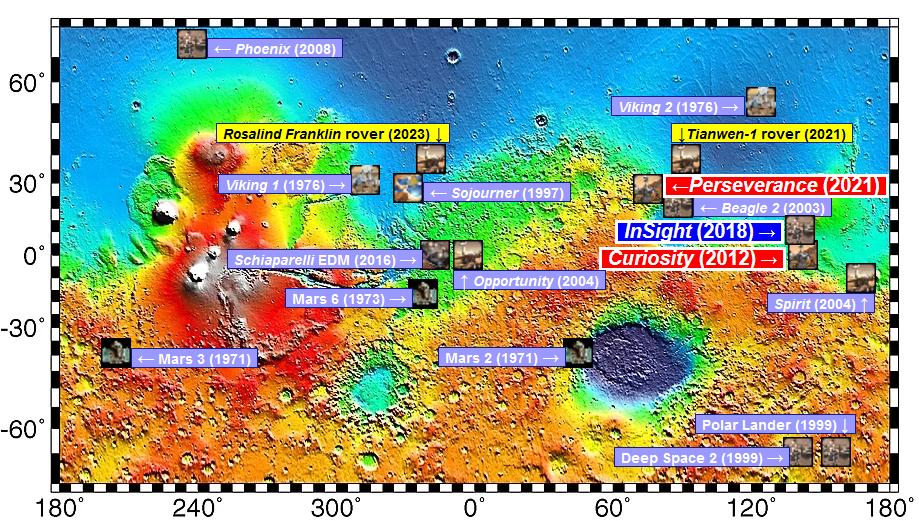 The distance between two close landing sites are at least several hundred kilometers. If a skycrane crashes some km away from its rover it is impossible to come close to any other landing site.

The aibility to fly away in a certain direction is not needed today.

Not the answer you're looking for? Browse other questions tagged curiosity perseverance guidance skycrane or ask your own question.

18
Did the Perseverance and Curiosity skycranes land gently, or did they crash?
5
Why did NASA intentionally crash-land the Curiosity and Perseverance sky cranes on Mars?

2
Mars 2020: What are the advantages of doing two missions to return samples?
5
Why did NASA intentionally crash-land the Curiosity and Perseverance sky cranes on Mars?
3
How did images taken by Perseverance's landing stage reach Earth despite its crash landing?
2
Why does the Perseverance Rover do sample caching?
7
Why did Curiosity not have a camera on board to record the landing?
1
Is Perseverance going to keep carrying those samples around or cache them? I don't really understand the plan