Did the Curiosity and Perseverance rover brains do the driving from Earth to Mars?

This interesting answer to Why did NASA intentionally crash-land the Curiosity and Perseverance sky cranes on Mars? leads me to wonder if the Curiosity and Perseverance rover computers were in charge the whole time, that during the long voyage from Earth to Mars it was their computers that JPL was talking to; they received commands from Earth via some high-gain antenna (and amplifier or radio) on the outside, fired the thrusters to spin up/down, processed star-camera data for attitude control, release the tungsten weights before reentry, pop the cover and shield, etc.

Question: Is this all true? Did the Curiosity and Perseverance rover brains do the driving from Earth to Mars? Or was there a separate flight computer for this work? 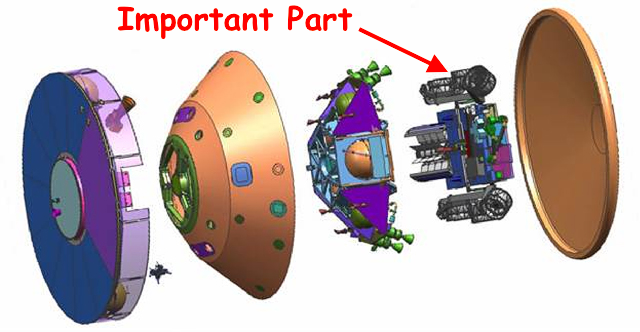 The no part first: Mars 2020 had sensors and effectors attached to the non-important parts of your diagram, many of which had various degrees of smarts.

Finally, the yes part: During entry, descent, and landing (EDL), it was without a doubt the rover's computers that controlled operations. The terrain recognition computer, the VCE, was on the rover, as was the rover's main flight computer, which performed EDL guidance, navigation, and control.

See also Why did NASA intentionally crash-land the Curiosity and Perseverance sky cranes on Mars?

Not the answer you're looking for? Browse other questions tagged curiosity perseverance flight-computer mars-science-laboratory mars2020 or ask your own question.

5
Why did NASA intentionally crash-land the Curiosity and Perseverance sky cranes on Mars?
7
Have various lunar rovers known their own position on the Moon? If so, how?
3
Where does MSL end and Curiosity begin?
3
When the Mars 2020 and Mars Science Laboratory missions were in deep space, what antennas did they have available to communicate with Earth?

5
What is the equivalent of Curiosity's "MSL" in the context of Perseverance? What's the official name of the mission? Are the distinctions similar?
2
Did the Mars Science Laboratory do any science that wasn't done by Curiosity proper?
5
Why doesn't the Perseverance rover have markers on its wheels like Curiosity?
5
Why did NASA intentionally crash-land the Curiosity and Perseverance sky cranes on Mars?
7
Why did Curiosity not have a camera on board to record the landing?
3
When the Mars 2020 and Mars Science Laboratory missions were in deep space, what antennas did they have available to communicate with Earth?
2
Are the Perseverance rover's "drivers" working on Martian sols or Earth days right now?