Did Skylab astronauts really "go outside" to look at comet Kohoutek? If so, why?

Today in The BBC's Skylab: The myth of the mutiny in space it says:

The Skylab space station was a research platform in orbit where astronauts helped scientists to study the human body's response to space flight, carried out experiments and made observations of the Sun and Earth. Skylab 4 was the final mission and as a result it had a long list of tasks to fulfil.

The 84-day mission - the longest ever at that point - was on a tight schedule. Nasa was very concerned about someone getting sick, which would have meant losing precious time.

Nasa accepts that mission planners had not given the crew the typical period of adjustment to acclimatise to working weightlessly in orbit and had packed their schedules with large amounts of work. The number of spacewalks was also doubled, to four, to observe a newly discovered comet, Kohoutek.

Answers to Is the Skylab 4 mutiny just a myth? cover a lot of background on the "mutiny" question, as does the BBC article. But my question is about the last sentence which states that two extra spacewalks were scheduled in order to observe comet Kohoutek.

It surprises me because spacewalks are time and resource consuming and dangerous and I can't imagine one would be scheduled just so someone could say "yep, there it is!" and because a few billion people could do that on Earth as well!

Question: Did Skylab astronauts really "go outside" on a spacewalk to look at comet Kohoutek? If so, why? 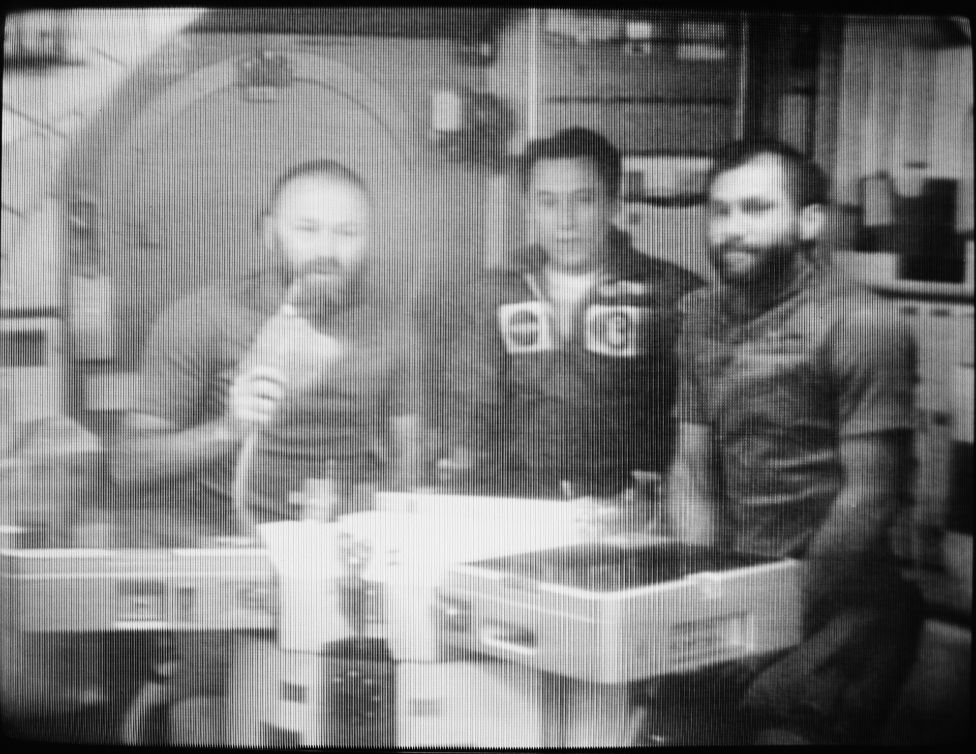 The Skylab 4 crew on the radio to Czech astronomer Lubos Kohoutek, who gave his name to the comet

Yes, but the EVAs were to mount and unmount cameras, not to look at it with their own eyes

There were 13 experiments during Skylab 4 to observe various characteristics of the comet Kohoutek. There are described in the NASA technical report MSFC Skylab Kohoutek Experiments Mission Evaluation. The mission summary clearly states that EVAs were involved:

The Comet Kohoutek's, (1973f) appearance and orbital trajectory provided NASA with a unique opportunity to perform an observing program on the Skylab SL-4 mission. The comet was observed on over one hundred occasions by thirteen Skylab experiments in spectral bands from X-rays, through ultraviolet and visible bands. Observations were performed: by corollary experiments through the scientific airlock (SAL); by hand held photography (HH); during extravehicular activity (EVA) and by the Apollo Telescope Mount (ATM) experiments.

Experiment S201 was the Far-UV Electronographic Camera. Although most images were obtained from the Scientific Airlock, EVAs were also performed to mount and unmount the camera on the truss of the Apollo Telescope Mount:

In the EVA mode, the crewman would attach the S201 to the ATM truss using a modified SO20 mounting bracket and point the camera at the comet using an integral sight. A vehicle roll about the longitudinal axis up to 16 degrees during pre-perihelion and up to 45 degrees post-perihelion was utilized to put the camera in the ATM solar panel shadow. This was required during EVA operations while the spacecraft was in sunlight and the comet was near perihelion.

Experiment T025 was Coronagraph Contamination Measurements, another camera that was used both in the Scientific Airlock as well as mounted to the body of the station during EVAs:

The hardware was modified for EVA sequences. These modifications included changing the TO25 occulting disc and the addition of an EVA mount (see figure 8).

TO25 was performed for ~ 50 minutes on December 25 and December 29 during the daylight portion of the EVAs taking 40 exposures each time.

There are no reports of astronauts looking with their own eyes. Considering that the comet was near perihelion, that would involve staring almost directly at the sun.

53
Is the Skylab 4 mutiny just a myth?
12
How was the Skylab 'parasol' deployed?
4
How did Skylab's electrographic ultraviolet camera work?
2
How far are space-walking helmet faceplates from the eyes? How far will I have to hold my "space binoculars" from my eyes during a space walk?
2
Roughly what fractions of the time did Skylab spend in Earth-oriented and Sun-oriented attitudes?

10
Did Skylab have a fixed orientation?
13
Why did Neil Armstrong alone, not NASA, end up coming up with the first words uttered on the moon?
31
How was the Skylab Rescue mission supposed to return 5 astronauts?
13
Did NASA tell the Skylab astronauts to "Stop running around!"?
3
How many times would two astronauts have to run around Skylab to turn it by 10 arc minutes?
9
Did Apollo astronauts play on the Moon their pre-recorded music?
53
Is the Skylab 4 mutiny just a myth?
1
Did Skylab have several giant spirit levels? That's what these look like to me, except there's no bubble
2
How could Shuttle orbiter with internal airlock dock with ISS or other space stations and were internal airlocks used for missions with spacelabs?
8
How was AS-212 (Saturn 1B) supposed to carry both a CSM and LM?