How far will I have to hold my “space binoculars” from my eyes during a space walk?

I'm on a space walk and comet Kohoutek is passing by and I've brought my specially designed space binoculars with me to look at it.

I left my Nikon Monarch 8x42 binoculars inside because with an eye relief of only 18.4 mm they would be nearly useless held against the faceplate of my helmet. I would be able to see an extremely tiny field of view; their 4.2 mm exit pupil at say 15 cm from my face would present an apparent angular field of view of not 51.3°, but only 1.6 degrees. I'd see tiny dots with stars in them, but it would be really hard to locate anything.

Question: How far would you have to hold "space binoculars" from your eyes in a space suit? I guessed at 15 centimeters but I have no idea, and probably different helmets for different suits present different distances.

These are going to be pretty crazy looking binoculars!

Screenshots from How to Adjust Your Binoculars (Presented by Nikon Canada) and Understanding Binoculars: Eye Relief showing how eyecups can be adjusted to place the exit pupil of the eyepiece at the entrance pupil of the eye. For those wearing eyeglasses (a glass barrier fixed in front of the eye) one retracts the eyecups.

A helmet with a transparent face plate would place the binoculars much farther from the eyes than eyeglasses do, so the exit pupil positions of the eyepieces of a pair of space binoculars would have to extend much farther. 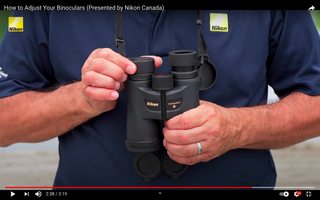 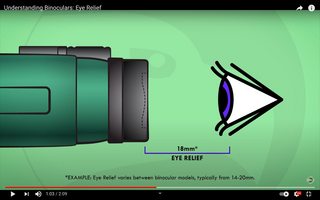 What it looks like when you are too far away from the eyepiece. From Wikipedia's exit pupil. If you were looking for something in a field of stars this "tunnel vision" would make it a lot more difficult. 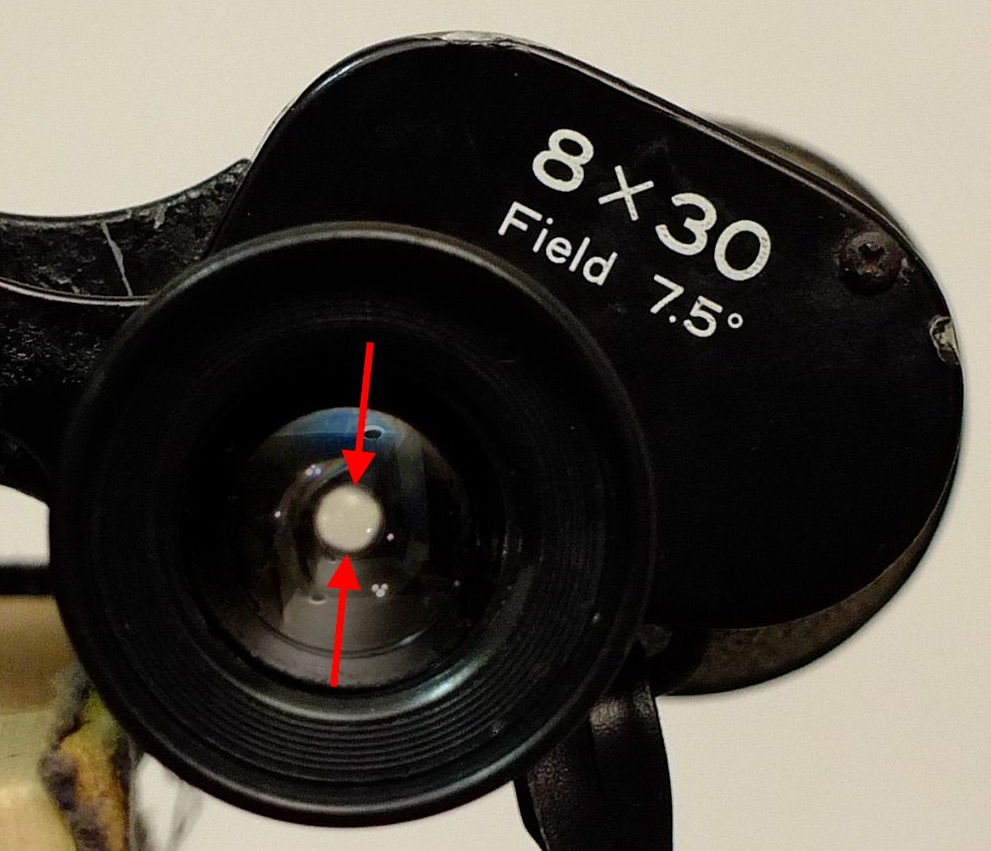 Cropped and annotated from here

To avoid this particular engineering problem I imagine space binoculars would just come with a screen so that you can hold it at your preferred viewing distance :P I'm imagining something akin to a camera with a telephoto lens

Edit: an example (not telephoto but an example of what a screen view through a high optical zoom camera lens would look like)

Something around the size of this camera is probably reasonable to mount on the helmet which would keep it fairly stable.

8x42 binoculars offer 8x optical zoom from my understanding and the camera in the video goes up to 83x so it should be simple to replicate the zoom level.

If they went with analog binoculars they would still likely be the kind which you press against the faceplate instead of held out in front of you though. As mentioned in the comment, stability is important when looking at magnified things with handheld devices.

Rifle scopes are designed to be viewed at a similar distance from the face and maintain a fairly high angular field of view. 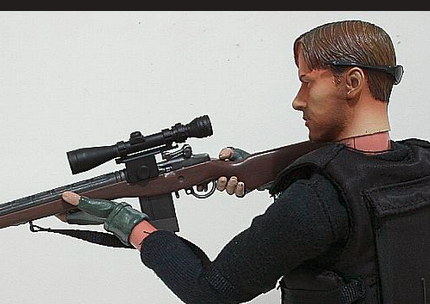 It would probably be a monocular because there's no point in 2 lenses if you can't get one image for each eye.

What I'm getting at is that they have the technology to make optical devices for a variety of viewing distances and so it's unlikely that the viewing distance will be a device limitation.

It's certainly possible to build a telescope (binocs are just pairs of 'scopes properly boresighted) with a distant pupil plane, or to build a focussing system with a digital display, as answers and comments already noted. The drawback of the digital display system is loss of stereoscopic vision, which doesn't matter if you're looking at stars but would matter if you're looking at some stuff nearby when you're on the Moon's surface, for example.

Given the overall cost of a modern spacesuit, I think it would be reasonable to design one with "flip-down" optics, the eye-lens of which are inside the faceplate and the field-lens outside. The whole assembly would be mounted on a common axis (bearings on each side of the helmet) to maintain alignment.

As close as is practical

The aperture of a lens makes an angle (the angular aperture) with the pupil of your eye. The closer the lens is to your eye, the bigger the angle becomes:

This means that the best way to see the image is to put the lens as close to your eye as possible, maximizing the angular aperture. Otherwise, you will only see part of the image; you can see the rest of the image by moving the lens or your eye side-to-side.

If you wear eyeglasses, try this. Look at your computer screen. Now take off your glasses, hold them a foot away from your face, and look through them at the screen. You probably won't see the whole screen. (It might be blurry, too, but that is a different issue.) Move your head side-to-side. Move the glasses side-to-side. The rest of the screen is there, but you only see a portion of it when the glasses are away from your eye.

An astronaut trying to use binoculars while inside a spacesuit will have the same problem; they will only see a narrow bit of what they are trying to look at.

Not the answer you're looking for? Browse other questions tagged spacesuits astronaut-lifestyle helmets or ask your own question.

12
Why don't astronaut helmets fog up? What's the chemistry and thermodynamics behind keeping the field of view clear even during heavy breathing?
3
Did Skylab astronauts really “go outside” to look at comet Kohoutek? If so, why?

12
How do people drink from cups in Space?
10
How have space suits dissipated the heat removed from astronauts?
3
How long can an astronaut stay in space and later have children?
6
How can space suits hold a pressure when they're hand sewed?
12
How do space suits offer heat protection i.e. during the lunar day?
13
Have astronauts in space suits ever taken selfies? If so, how?
2
How will space suit computers likely be radiation hardened?
4
In layman's terms, how hot will the skin of a spacecraft become, 144 million miles from the Sun?
3
How will the future Mars Space Suit Helmet design protect Astronauts from Martian Radiation?