Why don't astronaut helmets fog up? What's the chemistry and thermodynamics behind keeping the field of view clear even during heavy breathing?

Some space walking involves exercise (e.g. moving heavy stuff around) and the outside surface of a faceplate is constantly radiating its heat out into space. At night that thermal radiation is not reciprocated so there's roughly a kilowatt per square meter of cooling on the outside surface with a background temperature of about 2.7 Kelvin.

The human face is a direct and almost continuous source of water vapor on the faceplate as one exhales, and humans sweat which could potentially introduce water into the air in the suit. It's got to go somewhere!

All that's necessary for potential fogging is for the inside surface to be cooled below the dew point of the suit environment, and for some of that water vapor to come in contact with the surface and nucleate.

Question: Why don't astronaut helmets fog up? What's the chemistry and thermodynamics behind keeping the field of view clear during even heavy breathing? What is actually done?

Chemistry: Do they put specific chemical coatings that prevent nucleation on the inside surface? (e.g. anti-fogging agents)

Thermodynamics: Do they manage to keep the inside surface warm enough that it is above the dew point?

Other: Do they constantly blow dry air across the surface, displacing and removing incident water vapor and encouraging re-evaporation of any nucleated water present?

Dry, incoming air is blown across the inner surface of the visor from a part called a "spray bar". Thin-film heaters and chemical agents have also been used, to less success.

Although water vapor in exhaled air can cause fogging, the greatest source of water vapor is sweat. The problem is more common during physical activities such as spacewalks than when the astronauts are seated. The development of liquid cooling undergarments has significantly solved the problem.

Defogging goes all the way back to the first aviation pressure suit, made by B.F. Goodrich and worn by Wiley Post, enabling him to be the first person to fly above the tropopause and to discover the jet stream. The glass of the helmet was defogged by the dry, incoming air:

Oxygen entered through a port just to the left of the window (Post had the patch over his left eye) to defog the glass. An outlet to the right of the window vented the helmet. A valve, attached to a regulator and a pressure gauge, just below the left inner knee controlled outflow from the suit. 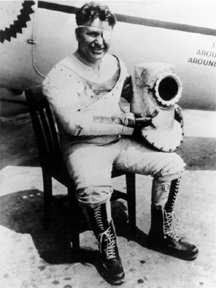 The David Clark model 12 suit worn by Scott Crossfield when flying for NACA used a face mask, with separate nose/mouth and eye compartments to prevent fogging.

NASA test pilot Joseph Walker tested the A/P22S-2 full-pressure suit in 1961. Made by the David Clark Company, it became the standard U.S. Air Force flight suit, and its basic design would evolve into many of NASA's spacesuits. It introduced the "spray bar", a metal or plastic tube around the circumference of the visor panel, with holes that blew incoming dry air onto the visor:

The breathing regulator and all plumbing were installed inside the helmet shell, with a spray bar around the periphery of the visor that defogged the visor.

The Mercury spacesuits, derived from the Navy Mark IV made by Goodrich, were an outlier in that they did not blow air onto the helmet:

The air flowed through a series of Trilok ducting that was integral to the torso and exited at the wrists, ankles, crotch, and periphery of the neck ring. It then flowed into the body of the suit to remove excess moisture and exited the suit through the exhaust port, into the cockpit. In addition to ventilating the suit, this air also pressurized it when needed.

I find no evidence of the Mercury helmets fogging, nor any effort made to defog them. The astronauts were largely sessile, not performing activities that made them sweat. The visor also could flip open, and it seems that many of the astronauts simply left the visor open.

A suit based on the Air Force A/P22S-2 by David Clark Company won a competition to become the Gemini spacesuit. The helmet inherited the spray bar, which was adequate for defogging when the astronauts were seated. However, liquid cooling undergarments were not yet invented, so the astronauts tended to overheat and sweat during intense physical activity, leading to fogging of the helmet. This was particularly bad during the spacewalk on Gemini 9A:

Cernan began the slow climb to the rear of the spacecraft, where the AMU was stored. While he was disconnecting himself from the capsule umbilical and hooking up to the backpack, his heart rate rose to about 155 beats per minute. He later described his spacesuit as having "all the flexibility of a rusty suit of armor", which made everything take much longer than expected. The lack of hand and foot holds also made him unable to gain any leverage, which made it hard to turn valves or even to perform any basic movements. While making the connections, Cernan became very tired. During this portion of the EVA, his pulse soared to about 180 beats per minute; the flight surgeon on the ground feared he would lose consciousness. As he sweated, his visor began to fog. He rubbed his nose against the visor to clear a spot so he could see.

The Gemini suit became the basis for the David Clark S1030 suit, used in the SR-71 Blackbird spy plane. A gold film was tried as a visor heater, but it was discontinued due to problems with reflections. In the following picture, item #23 is the spray bar: 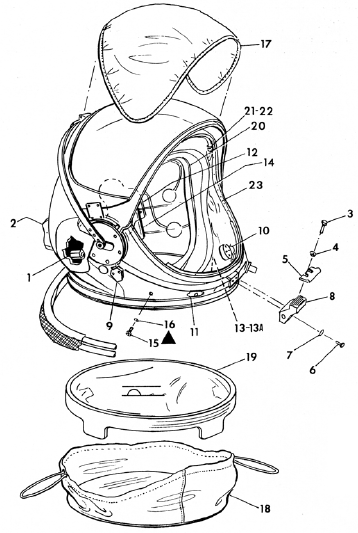 A variant of the S1030 suit called the A1C was worn by the astronauts in the Apollo 1 fire. The death of the astronauts resulted in a reconsideration of the spacesuits.

The eventual Apollo suit (model A7L) was manufactured by International Latex Corporation, with Hamilton Standard as a subcontractor for the life-support equipment. Incoming dry air was blown onto the inner surface of the helmet to prevent fogging:

The ventilation system provides for two modes of operation, EV and IV. In the EV mode, all inlet gas flow is directed to the helmet for respiration and helmet defogging. The gas flow then travels over the body to the extremities, where return ducting routes the flow to the suit outlet. In the IV mode, the gas flow is split, with part of the gas flow going into a torso duct and directly over the body and the remaining gas going to the helmet.

Exhaled air was returned by umbilical to the cabin environmental system, or (if on an EVA) the portable life-support system. In either case, the carbon dioxide scrubbers also removed moisture from the air. After oxygen was added, dry air was returned to the suit. Apollo spacesuits also had liquid cooling undergarments, which were very effective in preventing sweating.

There was also a spacesuit repair kit, which included a defogging chemical (but no reports of it being used):

In each, the visor can be opened; many astronauts never closed their visors. Incoming air is blown into the helmet through a spray bar. The air then continues through one-way valves in the neck dam, pressurizing the body of the suit. A pressure regulator then expels the air into the cabin.

A different suit was used for EVAs: the Extravehicular Mobility Unit. Again, incoming dry air is first blown onto the helmet surface:

The circulating oxygen enters the suit through a manifold built into the Hard Upper Torso. Ducting carries the oxygen to the back of the space helmet, where it is directed over the head and then downward along the inside of the helmet front. Before passing into the helmet, the oxygen warms sufficiently to prevent fogging of the visor. As the oxygen leaves the helmet and travels into the rest of the suit, it picks up carbon dioxide and humid ity from the crew member’s res pirat i on. More humidity from perspiration, some heat from physical activity, and trace contaminants are also picked up by the oxygen as it is drawn into the ducting built into the Liquid Cooling-and- Ventilation Garment. A centrifugal fan, running at nearly 20,000 rpm, draws the contaminated oxygen back into the PLSS at a rate of about 0.17 cubic meters per minute, where it passes through the Contaminant Control Cartridge.

This is the only instance I have found of pre-heating the air. I'm not sure if it is done electrically or by the astronaut's body heat. Directly heating the helmet by wires or coatings seems to no longer be done, because of the impact on vision.

An antifog chemical is also applied as part of EVA preparations:

Next, several simple tasks are performed. Antifog compound is rubbed on the inside of the helmet. A wrist mirror and a small spiral-bound 27-page checklist are put on the left arm of the upper torso.

I haven't found any examples of special coatings. I don't know that the defogging chemicals are, but the same wipes are used to clean the helmets, so it might simply be some kind of alcohol.

They use anti-fogging agents.

This is actually a pretty famous factoid because Chris Hadfield went blind during a spacewalk after some of the anti-fogging agent irritated his eye, and he has given a lot of talks about this incident, both in the aerospace community as well as as a motivational / inspirational speaker about trusting your team, trusting yourself, never panic, never give up.

Apparently, they have now switched to a less irritating agent.

7
Is there anything preventing an astronaut from opening their helmet and exposing themself to the vacuum of space?
2
How far are space-walking helmet faceplates from the eyes? How far will I have to hold my "space binoculars" from my eyes during a space walk?

14
Could an EVA Suit meant for Mars be used for EVA on another celestial, or vice-versa?
9
Will suits worn on Mars lose kilograms of "expendable water" each time they are used?
7
How were Apollo spacesuits cooled during simulations/rehearsals on Earth?
24
How do EVA suits manage water excretion?
2
How far are space-walking helmet faceplates from the eyes? How far will I have to hold my "space binoculars" from my eyes during a space walk?
17
Where exactly are the Apollo space suit sublimators venting steam into space? is there a photo of an astronaut in space that shows the opening?