How do you 'make oxygen' on Mars?

This morning's BBC News says that a 2020 rover mission to Mars will "make oxygen". There is a brief line indication that it will extract it from atmospheric CO₂, but no other details.

What process will the rover use? Is this a plausible method for obtaining oxygen on Mars for human life support?

To be somewhat more specific than @geoff that gave an overview, regarding MOXIE (Mars OXygen In situ resource utilization Experiment), according to brief notice in the NASA press release that accompanied the Mars 2020 Rover scientific payload announcement:

And a mock-up of the presumed layout of these announced scientific experiments and equipment: 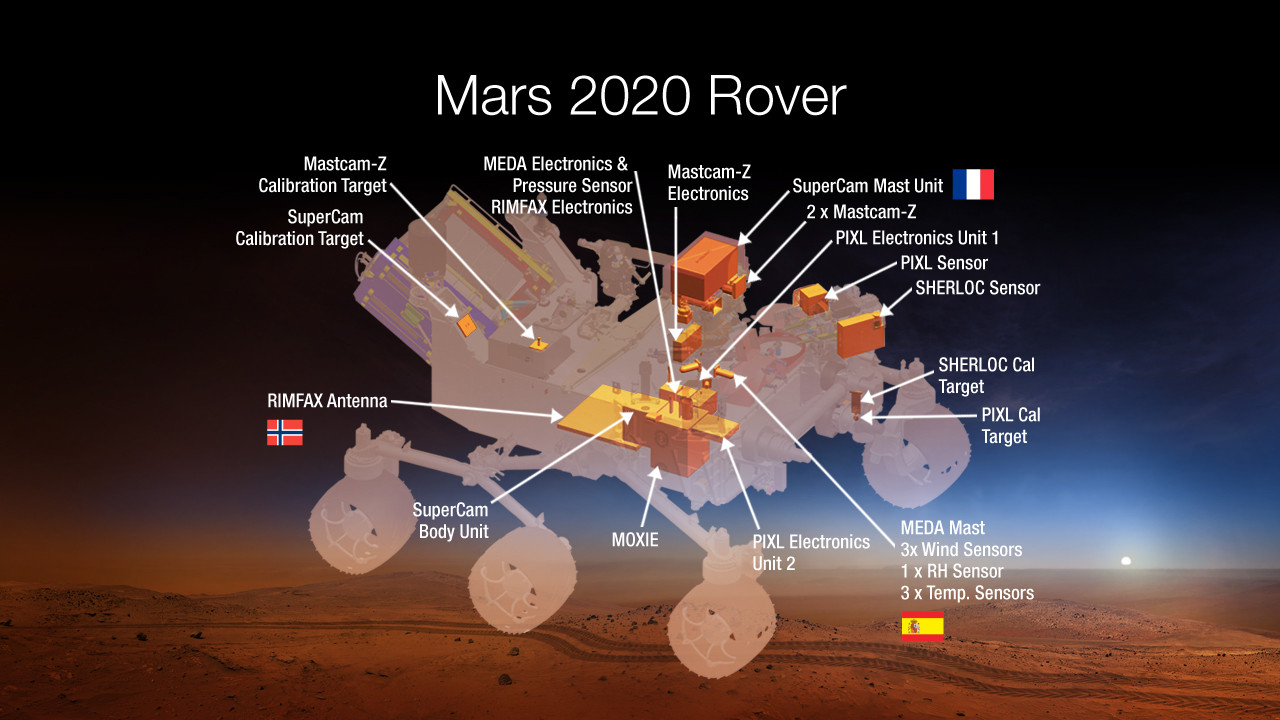 An artist concept image of where seven carefully-selected instruments will be located on NASA’s Mars 2020 rover. The instruments will conduct unprecedented science and exploration technology investigations on the Red Planet as never before. Image credit: NASA

More detailed information will slowly trickle into the press as specifics are decided upon during the course of next few years, and indeed SpaceRef just published a story on it (I'd assume following media teleconference that was scheduled a few hours after yesterday's public announcement of the Mars 2020 Rover science package on NASA TV):

MOXIE -- short for Mars OXygen In situ resource utilization Experiment -- was selected from 58 instrument proposals submitted by research teams around the world. The experiment, currently scheduled to launch in the summer of 2020, is a specialized reverse fuel cell whose primary function is to consume electricity in order to produce oxygen on Mars, where the atmosphere is 96 percent carbon dioxide. If proven to work on the Mars 2020 mission, a MOXIE-like system could later be used to produce oxygen on a larger scale, both for life-sustaining activities for human travelers and to provide liquid oxygen needed to burn the rocket fuel for a return trip to Earth.

More on MOXIE in the article.

So this experiment is going to extract oxygen from the atmospheric carbon dioxide that constitutes 96% of Martian atmosphere. And the modus operandi for this particular experiment seems will be what Wikipedia describes as electrolysis of the atmosphere, possibly using zirconia as a catalyst:

See e.g. Zirconia Electrolysis Cells for Oxygen Generation from Carbon Dioxide for Mars In-Situ Resource Utilization Applications. Additional note that carbon monoxide is merely an immediate reaction product and, while it could be used as fuel on Mars, it can also be further reduced by use of catalysts and additional energy into elemental carbon and oxygen, or by adding hydrogen by secondary Bosch reaction to graphite and water, and so on. Since it's not yet known exactly how MOXIE will do that, and what use its reaction products will be put to, I'd reserve further judgment on it for the time being.

There are of course also other possibilities to extract oxygen on Mars, for example from possible water ice pockets embedded deep into its regolith and using electrolysis to split water into oxygen and hydrogen, from dry ice that we know exists in abundance in Martian regolith and as a precipitate above it in polar regions and then using same or similar oxygen extraction methods as MOXIE will employ, to superheating and melting oxidized minerals, rust and metallic ore to release locked oxygen in it, and so on. But for the first steps, extracting it directly from atmospheric CO2 seems to be the easiest way to do it without needing to employ a whole truckload of machinery that we can't afford to land there, or don't really know how to yet.

There are many proposed chemical processes that can lead to taking elements found commmonly on Mars, and using them to make more useful things for humans.

That Wikipedia link nicely summarizes some of the likely approaches to be taken.

There was a great Sci Fi book that looked at the problem as a series of successive chemical processes, where the output of the first is used by the second, then third, so that they get a complete cycle going. Cannot find the reference. (There is an accident on earth, starts a fire, primary character cannot go due to lung damage).

In simplest terms: You find a chemical that is made of a mixture of oxygen and anything else, and then cause the molecules of that chemical to give up their oxygen (and thus becoming something else).

9
What useful materials can be extracted from Venusian atmosphere?
8
Can a machine process and run on $CO_2$ and $H_2O$ for an $O_2$ by product?
6
Why haven't we returned samples from Mars?
8
Sources for make-up breathable oxygen on Mars; of H₂O, CO₂ and ClO₄⁻, which is likely to be used first?
6
Is there a cost effective way to obtain Nitrogen/Argon on Mars for usage in a human breathable habitat?
4
How to produce oxygen out of Venusian atmosphere's carbon dioxide?
3
How could you create water and air from materials in the Solar System?
2
Back to oribt from Mars - how many km^2 yr of solar power to make enough propellant?

10
How much oxygen and hydrogen are in the soil of Mars?
6
Does Mars One plan on taking precautions to ensure the Martian environment is not contaminated with Earth biota?
2
How does the Mars 2020 rover's suspension and center of gravity compare to Curiosity's?
8
How did Spirit and Opportunity identify ferric sulfate and jarosite on Mars?
7
What kind of rocket will ESA(?) launch from Mars? Who will build it?
2
Will surface samples from Mars orbit the planet in a spherical capsule until captured?